It has happened again. Jihadists have struck in the heart of Europe, spreading terror while murdering dozens and maiming hundreds of innocents. Yesterday’s coordinated attacks on Brussels have woken Europeans, yet again, to the threat that exists in their midst—a grave danger politicians seem to have no idea how to handle.

The bombings at Zaventem airport and the Brussels metro at current count killed 31 and injured 270—over 300 casualties in all. Belgium is not accustomed to such a bloodbath. Its army contingent in Afghanistan suffered only 15 casualties, with just one killed, during that U.S.-led war. It’s been over 60 years since Belgians died violently in any numbers. Their battalion serving in Korea lost 101 killed and 478 wounded in action between 1950 and 1953. This is a distant memory today.

Belgium is a small country. Relative to population, this would be equivalent to 900 dead Americans and a staggering 7,800 wounded. To say nothing of the symbolism of yesterday’s attack on the metro near Maelbeek station in downtown Brussels, right next to the offices of the European Union. Striking at the very heart of the European project, revealing its vulnerability to even a handful of ardent madmen, sends a powerful message that nobody can miss.

At this hour, two suicide bombers, brothers, have been identified while the surviving member of this evil triumvirate is in custody, although not yet positively identified. The Islamic State, the notorious ISIS, has claimed responsibility for the attacks, and there’s no reason to doubt their claim, nor that the attacks were linked to ISIS in some fashion. As always, the killers will have a support system in their community too. After all, Belgium is an outlier of a toxic kind, its angry Muslim population producing jihadists eager to fight for ISIS out of all proportion to its size.

Yet its very status as a Jihadistan of sorts gave Belgium a degree of protection until very recently. While mass-casualty attacks struck across Europe since 9/11—Madrid in 2004 (191 dead), London in 2005 (53 dead) and Paris twice last year (17 dead in January and 137 in November)—Belgium was left nearly unscathed. Radicals appreciated that Brussels, being lax in security matters, was granting them de facto sanctuary to plot attacks elsewhere. This was a deal that the terrorists sensibly saw no point in disrupting.

Belgium’s chronically dysfunctional politics have played a toxic role, as has the general Western European tendency to avert eyes and hope for the best.

None of this is new. A quarter century ago, back in the early 1990s, Belgium developed robust clandestine networks of jihadists, heavily of North African origin, dedicated to supporting the Armed Islamic Group (GIA, an early joiner with Osama Bin Laden’s global movement) and its bloody war back in Algeria. Belgian intelligence paid less attention to GIA networks than later seemed warranted because the jihadists were plotting terrorism elsewhere—seldom if ever in Belgium—and Belgian spies knew that GIA “ratlines” in their country were heavily watched, and at times manipulated by Algerian intelligence, which had no interest in blowing up Belgium.

Thus when Belgian-based terrorists caused mayhem in France in the mid-1990s, including a wave of bombings in Paris, Brussels helped French intelligence catch the bad guys but undertook no serious dismantling of jihadist networks in Belgium. Over time this problem metastasized, and with the rise of ISIS in recent years, including hundreds of Belgian citizens going to the Middle East to wage holy war for the Islamic State, the threat has grown exponentially.

The game changer was last November’s horrific attacks in Paris, the bloodiest events on French soil since the Second World War. These turned out to have a significant Belgian footprint, with several of the attackers linked to Molenbeek, a notorious Brussels suburb that’s half-Muslim and known to authorities as a hotbed of radicalism. For the police, Molenbeek has been a no-go area of sorts for years, leaving jihadists free rein to raise funds, collect arms, and plot mayhem elsewhere.

It was thus no surprise that Molenbeek was where the police last week finally caught up with Salah Abdeslam, the last of the Paris attackers still on the run. It was also no surprise that many Muslims in that community were less than supportive of the authorities in their efforts to find the wanted man. Mr. Abdeslam has already been linked to yesterday’s attacks and their execution only four days after his capture hardly seems like happenstance.

The depressing bottom line is that even the best intelligence cannot compensate for political failings on an epic scale.

Cops and spies will now roll up any members of Mr. Abdeslam’s network that they can track down. But their crackdown on Molenbeek last week—combined with the current manhunt for anybody linked to the Brussels bombings—means Belgium is no longer a safe haven for jihadists. Radicals will now attack Belgium as they have everywhere else, and the sheer number of jihadists in the country makes that a terrifying prospect.

Belgian intelligence has long been short of funds and personnel and above all any political will to do anything substantive about the country’s vast jihadist problem. Belgium’s chronically dysfunctional politics have played a toxic role, as has the general Western European tendency to avert eyes and hope for the best regarding the growing radicalism of whole swathes of young people in the Muslim ghettos that exist in most of their cities now.

As I’ve explained before, there is no intelligence solution to this problem. Although more funds and better information sharing will surely help prevent some terrorism—and especially catch terrorists after they kill innocents—the threat is now so great, with Europe possessing thousands of homegrown radicals bent on murder, that mere spying cannot prevent all attacks “left of boom” as the professionals put it.

Maintaining 24/7 human and technical surveillance on just one target requires something like two dozen operatives, and even the larger European security services can effectively watch only a few handfuls of would-be terrorists at one time. Even then, mistakes will be made. To say nothing of the alarming progress made by Europe’s jihadists recently in communications security—this was a big reason why November’s Paris attackers were not stopped in time—that is blunting the effective Western counterterrorism methods that have been honed since 9/11. The depressing bottom line is that even the best intelligence cannot compensate for political failings on an epic scale.

Simply put, Europe has imported a major threat into its countries, one that did not exist a couple generations ago. It can be endlessly debated why this problem has grown so serious so quickly—for instance, how much is due to Europe’s failures at assimilation of immigrants versus the innate aggression of some of those immigrants (and their children)?—but that the threat is large and growing can no longer be denied by the sentient.

What, then, is to be done? Admitting the extent of this threat is the necessary first step, albeit one that the EU’s political class seems congenitally unable to address. Instead, the public is treated to the now-customary clichés about religion having “nothing to do with terrorism,” combined with ritual admonitions about “Islamophobia.” One wonders how much more of this organized dishonesty the European public can take.

Europe is now at war again. The threat today is less terrorism than a low-grade insurgency, a guerrilla war of sorts, that hangs over much of the continent as thousands of jihadists, made proficient killers by ISIS in Syria and Iraq, return home with visions of killing “infidels,” their former neighbors. There will be no parley or negotiation with such mass murderers. Parsing the death-cult ideology that drives ISIS fighters, with the hope of making it less noxious, makes as much sense as trying to divine the finer political points of the Manson family.

We should expect more guerrilla-like attacks like Brussels yesterday: moderate in scale, relatively easy to plan and execute against soft targets, and utterly terrifying to the public. At some point, angry Europeans, fed up with their supine political class, will begin to strike back, and that’s when the really terrifying scenarios come into play. European security services worry deeply about the next Anders Breivik targeting not fellow Europeans, but Muslim migrants. “We’re just one Baruch Goldstein away from all-out war,” explained a senior EU terrorism official, citing the American-born Israeli terrorist, fed up with Palestinian violence, who walked into a Hebron mosque in 1994, guns blazing, and murdered 29 innocent Muslims.

When that violence comes, a practically disarmed Europe will be all but powerless to stop it. To take the case of Belgium, at the Cold War’s end a generation ago, its army had seven brigades with 18 infantry battalions, plus some 30 more battalions in the reserve. Today, Belgium’s army has only two brigades and six infantry battalions, some 3,000 bayonets in all. That tiny force would have trouble exerting control over even one bumptious Brussels neighborhood in the event of serious crisis.

Back in 2012, Switzerland conducted military exercises premised on conditions in Europe getting out of control, between migration, radicalism and economic decline. They repeated those exercises the following year, and since then the Swiss, who have a knack for preparing for all contingencies, have warned that Europe’s burgeoning interlinked crises may result in major war. Such warnings were pooh-poohed by EU bien-pensants at the time; now they seem prescient.

What happens next is the main question. It’s difficult to miss that Central Europe, whose illiberal leaders have been castigated by Brussels for their unwillingness to accept Muslim migrants, singularly lack the terrorism and radicalism problems of their EU neighbors to the West. Their standing fast on the migration issue seems wise now. Belgium, along with much of the EU, has given itself a political crisis that lacks tolerable solutions. After the Cold War, with the birth of the European Union, many Europeans believed they had achieved the “end of history.” Issues of war and peace had been settled; henceforth Brussels would debate nothing more worrisome than agricultural subsidies. But history has returned, as it always does. And when politics fail, violence follows, and violence on a large scale becomes war. 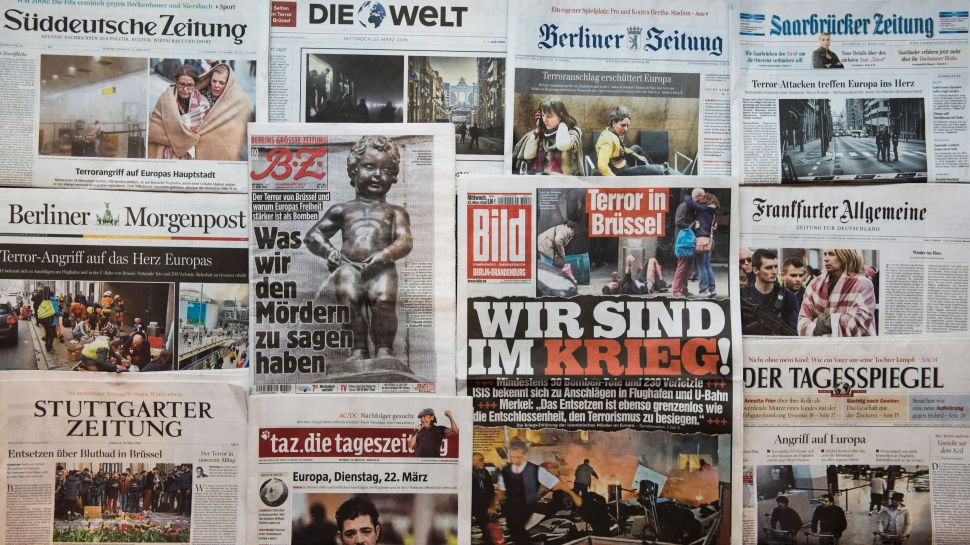