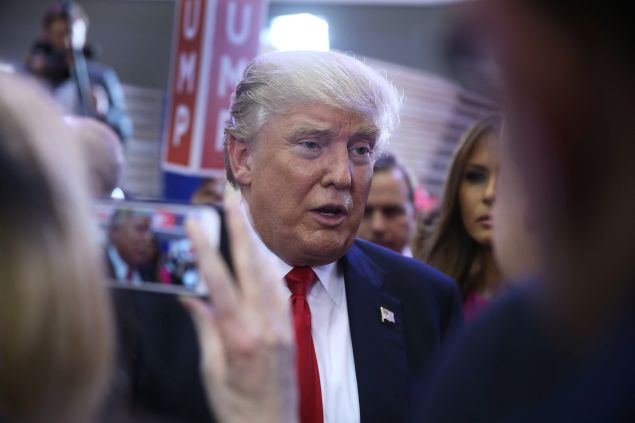 Republican presidential candidate Donald Trump speaks to the media in the spin room after the Republican Presidential Primary Debate on the campus of the University of Miami on March 10 in Coral Gables, Florida. The candidates continue to campaign before the March 15th Florida primary. =Joe Raedle/Getty Images

Even right-wingers now agree that Donald Trump is scary. His rhetoric is the distilled essence of Fox News Channel and “conservative” radio hosts like Mark Levin, Sean Hannity and Rush Limbaugh. And the actions of the growing mob that cheers and sucker-punches for Mr. Trump’s Presidential bid looks like film from Germany in the 1930s.

With police holding Rakeem Jones in an aisle way of steep steps, an old white man wearing a red neck and a cowboy hat—John Franklin McGraw—cold-cocked the black man in full view of several police officers.

Ms. Kelly didn’t mention that the Cumberland County sheriff’s department didn’t charge the cow poke with assault, battery and disorderly conduct until Thursday when they were embarrassed by the videos made viral by spectators with cell phone cameras who posted them on social media.

‘We really want to be gentle. We want to be nice. Every once in a while you have somebody that goes wild.’

But Ms. Kelly did point out that none of Mr. Trump’s debate opponents dared to find fault with his dangerously popular American Backlash Fascism.

Chris Stirewalt, a loyal Fox “conservative,” looked deadly serious and maybe a little afraid while speaking from one of the little boxes on Ms. Kelly’s screen.

“When you say that a protester ought to get punched in the face and somebody gets punched in the face, we can’t pretend these are totally disconnected items,” Mr. Stirewalt said. All the other candidates, he said, ducked the issue Thursday night.

“Instead of saying ‘Donald Trump has created an atmosphere in which he incited people to greater rage,’ those guys on that stage didn’t take Trump to task… a weak performance on everyone’s part when it comes to holding Trump to account.”

Mr. McGraw spoke for himself when interviewed by Inside Edition at the end of Mr. Trump’s rally Wednesday night. As he spoke, the background music in the arena was the choir opening to “You Can’t Always Get What You Want” by the Rolling Stones.

“You bet I liked it, knocking the hell out of that big mouth,” Mr. McGraw said. “Number one, we don’t know if he’s ISIS… but we know he’s not acting like an American. The next time we see him, we might have to kill him.”

On Thursday, Mr. Jones told The Washington Post: “The police jumped on me like I was the one swinging. My eye still hurts. It’s shocking.”

During the debate, CNN’s Jake Tapper asked Mr. Trump what he will do about chronic violence at his rallies, much of it preceded by Mr. Trump’s vicious words. Quoting Mr. Trump, Mr. Tapper read: “Knock the crap out of him, would you? Seriously, just knock the hell. I promise you, I will pay the legal fees.”

Mr. Trump explained to Mr. Tapper that such problems are caused by “protestors who are bad dudes… who start hitting people.”

Mr. Trump also said Thursday his staff would be “vigilant.”

That’s one vowel away from “vigilante,” which is the way Mr. Trump’s staff, supporters and Secret Service bodyguards have been acting toward journalists and spectators who don’t raise their right arms in unison to pledge loyalty to Mr. Trump.

On liberal MSNBC, also after Thursday’s debate, Chris Mathews showed a “best of” compilation of Mr. Trump inciting the reactionary rabble who get off on his jingoism and race-baiting.

“We’re not allowed to punch back anymore,” Mr. Trump said. “I love the old days. Do you know what they used to do to guys like that in a place like this? They’d be carried out on stretchers, folks… I’d like to punch him in the face, I tell ya.”

Also on MSNBC after the debate came a first-rate interview of Mr. Trump by Katy Tur of NBC News. This was in the spin room. Ms. Tur asked Mr. Trump about the Wednesday night assault.

TRUMP: “78-year-old. I just got to see a clip. He threw a punch. I don’t know if he hit. But he was an impassioned person. And I guess he didn’t like what he was seeing. It was one of those things. Certainly, we don’t condone it. We don’t like it. We don’t like to see it.”

TUR: “What are you going to do to make sure something like that doesn’t happen again at one of your rallies?”

TRUMP: “We really want to be gentle. We want to be nice. Every once in a while you have somebody that goes wild. You’ll have a protestor that is out of order.”

TUR: “Is there something that you will do at your rallies from now on to make sure that this sort of thing doesn’t happen again?”

TRUMP: “We’re going to be vigilant… The police do an incredible job. It’s not my security people. It’s the police.”

Ms. Tur then challenged Mr. Trump on the charge by a female reporter for a right-wing web site—Michelle Fields of Brietbart—who said she was bruised when roughed up by Mr. Trump’s campaign manager, Corey Lewandoski..

TUR: “You just said that she may have made the story up. The Washington Post reporter is the one that reported it and saw it. Do you think he’s making it up as well?”

TRUMP: “I don’t know anything about it, I just heard about it a while ago.”

Ms. Tur asked Mr. Trump about the photograph of bruises on the woman’s arm after being manhandled.

It got very testy at this point with both people talking over each other. Defending his manager, Mr. Trump said to Ms. Tur “Will you apologize to him if it turns out that nothing happened?”

She tried to respond but Mr. Trump ignored her, turning his shoulder and walking away. 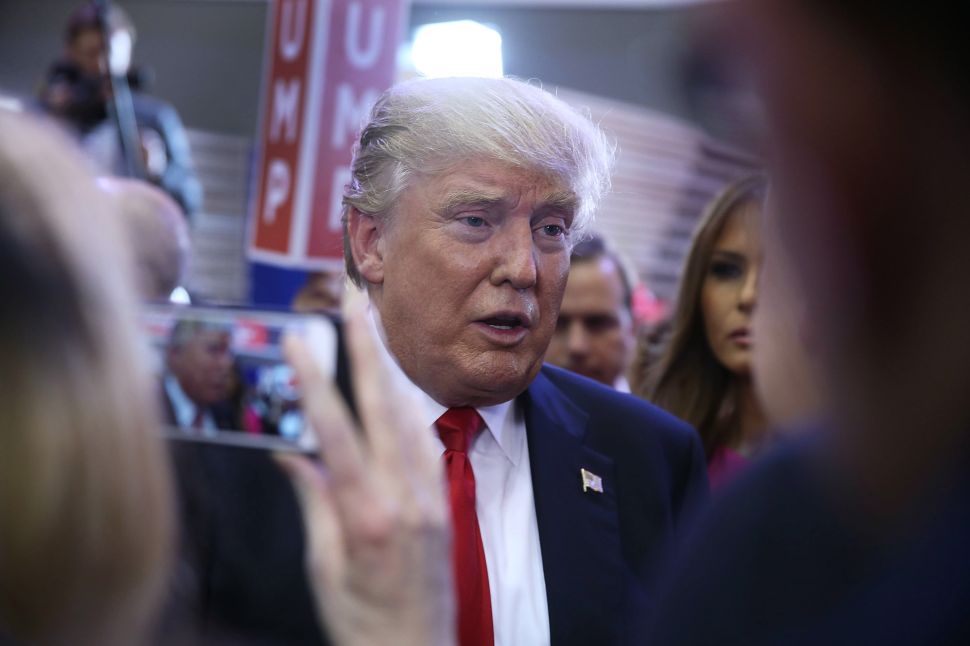