In an interview that will air this weekend on The Jonathan Ross Show, a UK chat series, Kit Harington unequivocally answered rumors about his role in the upcoming season of HBO’s award-winning global smash, Game of Thrones.

The actor plays Jon Snow, a character who died during the finale of the previous season, but is constantly hounded for spoilers by fans in stores, on the street and even with UK royalty. For example, a man Mr. Harington meets “every time” in his local grocery store regularly approaches the actor, claiming he knows Jon Snow isn’t dead. When asked by Mr. Harington why he thinks this, the Game of Thrones fan explains to his hero, “You’d be crying if you were dead!”

Mr. Harington laughed, “I think he thinks I’d be weeping in the street for the rest of my life that I’m not in Game of Thrones anymore!”

It’s not only fans of the show who ask him whether his character is dead or not—even the royals are interested. He told Jonathan Ross, “I get this from everybody. Me and my brother got invited to Wimbledon and a Royal was hosting, it was the Duchess of Cornwall and we sat with her—me and my brother—and she leant over the table and said ‘Are you dead?’ No word of a lie.”

The host intervened, joking, “Yeah, because when you’re lying dead you’ve got to film for a couple of months…”

But his quarry was not to be tripped up. “I won’t tell you how many episodes I’m lying dead but it’s enough that I was out there for quite a while.” He added, with a knowing smirk, “It’s going to be so satisfying when you see it and you realize that I was telling the truth the whole time!”

Undeterred, Mr. Ross asked how his guest kept spoilers and secrets with the show going forward, to which Mr. Harington replied, “I am no longer involved in the show so any secrets that are with the show I don’t actually know anymore—so it becomes very easy, Jonathan.”

With another smile, he added, “You’re looking at me like you don’t believe me. It’s going to be so relieving when people actually see the show and realize that I don’t come back.”

With smirks and knowing looks everywhere, it’s difficult to know exactly what the hell is going on. But one thing is definite, Jon Snow is most assuredly in Game of Thrones season six—though as a corpse or a living character, we’ll just have to wait and see.

Outside of Thrones, which is currently costing around $10 million per episode, Mr. Harington spoke about his role onstage in the play, Doctor Faustus, which begins April in London. The actor teased, “It’s very contemporary, it’s very modern, it’s cinematic, it’s exciting it’s got bodily fluids flying around all over the place, I get my arse out.” Well, that’s one way to get bums on seats, as it were.

Game of Thrones returns to HBO on April 24. 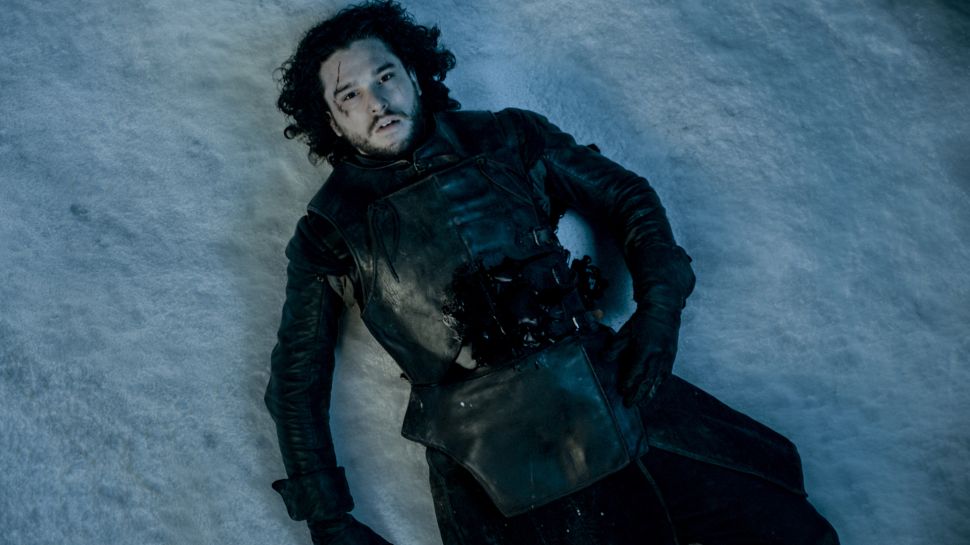