I’m not going to lie– I was nervous when I realized that this entire episode would center around Japan. I had visions of horrific cultural misappropriations, like Gwen Stefani’s Harajuku Girls scandal. Would this be another instance where Japanese women were painted as one-dimensional, giggling creatures? Thankfully, writer Jenni Konner and director Jesse Peretz rose above that (very low) bar.

The episode opens on Shoshanna waking up in a freakishly cute apartment. There’s a puppet lion hanging from the ceiling and her bedside table has a clock with a mouth that moves. If there was a ball of aluminum foil, we’d officially be in the Japanese version of Pee-wee’s Playhouse. But this is Girls, so instead of weird conversations with furniture we get Shosh putting on her Hello Kitty headphones and making her daily commute to the office. She’s a pro– she’s not even phased by being shoved into the metro like a sardine. Unexpectedly, it seems like Shosh is crushing life in Japan.

Thankfully, we leave this uncomfortable scene and head back to Japan where, of course, more weirdness ensues. But this time it’s of the adorable variety. Shosh runs into her office crush, Yoshi, and he asks if she “had pleasure on this weekend.” Shoshanna takes the English misstep in stride and assures him that, yes, she had major pleasure. When Yoshi tells Shoshana that he’s pleased with her work, she blushes and orchestral music swells. Really.

Cut to some sort of spa, where Shosh is in a hot tub, seemingly naked, with two of her co-workers. They insist that Yoshi is in love with her, but Shoshanna claims that it doesn’t matter: “Even though I’ve only been here for a very short while, I truly feel like this is my home and you people are my family. And I don’t even really care about people in America anymore.” While I’m happy that Shosh feels at home in Japan… what about Scott?

Meanwhile, Yoshi is also in a hot tub, naked, talking with his friends. Of course, they’re gossiping about Shoshanna. Yoshi’s friends claim that American girls typically say, “Hello, and let’s fuck!” if they’re interested. Words straight out of my mouth. But, since Shosh didn’t immediately say that she wants to fuck Yoshi, she’s obviously not interested.

Still in their spa robes, Shosh and her friends go and get cotton candy. What kind of dream world is this?! Take me there! Turns out, Yoshi is also in this dessert-spa room. He stares at Shosh sadly while he sits on the floor and licks an ice cream. I think this moment is supposed to be cute… but I’m just awkwarded out.

And WOAH, cut to Desi’s gorgeous bare butt in an outdoor shower. Oh, I guess Marni is there too– but she’s just Skyping with Hannah about Fran’s naked girl pics, so let’s focus on that butt again for a second, shall we? This is even better than the cotton candy spa.

Anyways, Marni tries to convince Hannah that Fran’s no-porn policy is enlightened. Obviously, Hannah isn’t having it and compares consensual naked photos to killing someone and keeping their head as a trophy. Sure. Alright.

After one more gorgeous shot of Desi’s nakedness, we’re back in Shoshanna’s kick-ass apartment in Japan. She’s Skyping with the head of her office in the States. Shosh keeps gushing about how much she loves her job, and is completely oblivious to the telltale signs that her ass is about to get “managed out.” AKA fired. Poor Shosh– she finally found her stride, and now she has to leave the country. Understandably, she’s pissed. Even a Business Class ticket home won’t make her any happier.

Surprise, Hannah is still pissed about Fran’s naked ladies. But now she’s complaining to Ray. Thankfully, he says exactly what we’re all thinking: “So he’s opposed to the enslavement and trafficking of young women. How outrageous!” Yet then, finally, Hannah says what’s truly bothering her– she’s getting “edged out of her life” by girls with traditionally hot bodies, when she’s worked for so long to love her own. “They don’t even have any interesting fat deposits on them!” AMEN.

And now, somehow, Hannah is posing in Ray’s coffee shop. Naked. While Elijah holds up a curtain. I’m sorry, is the store open right now? What if a customer walks in and sees a naked woman lounging right next to one of the tables? Yes, props to Hannah’s fantastic love for her body. But seriously, is Ray concerned about hygiene at all? No wonder he never has any customers.

Meanwhile, poor Shosh is at a bar, wondering how the hell she lost her job when she was doing so well. Her friends, trying to comfort her, remind her that she’ll going home to her future husband! Yet Shoshanna doesn’t seem interested in her fiancee at all. Womp womp.

Back in America, Jessa, Adam, and Ray are watching Adam play a homeless person in a cop show. Jessa is super turned on by his performance– apparently she’s is more willing to flirt with Adam when she thinks that he’s going to be famous.

Across an ocean, Shosh calls Scott and tell him that she’s coming home. It’s pretty clear that she’s not excited about it– which should be a hint to Scott that things aren’t going so well in their relationship. Granted, Scott says everything that a good boyfriend would– he tells Shosh that he’ll take great care of her, and they’ll move forward together. Yet standing there, crying on the sidewalk, it’s clear that Shoshanna isn’t ready to leave her new life– or get back together with Scott. So, what’s she going to do? Apparently, text Yoshi.

While all of that drama is happening, Hannah and Fran are having the most unsexy sex ever. From the look on her face, it’s clear that Hannah is thinking about something other than the D– and that something is Fran’s naked ex-girlfriend pictures. Ugh, get over it woman.

At a different NYC apartment, Jessa can’t stop gushing about how great Adam’s TV acting is. Meta. Then Ray goes off to bed, leaving them to stare longingly at each other. After pointing out a haiku that he wrote on his ceiling– what?– Adam kisses Jessa. No surprise there. Alas, she shoves him off. I’m actually starting to want these two to get together. Yet, in another meta moment, Jessa leaves and declares “I’m not doing this will they, won’t they shit.” Kudos for sticking to your guns, Jessa. Don’t let those hormones keep ya down.

Speaking of hormones, Shosh can’t seem to focus on the music at a punk show. Instead, she makes her way over to Yoshi and wraps her arm around him. Where did this boldness come from? Oh right, her entire life just entirely changed. She’s going to have a breakdown. And break it down she does, dancing with Yoshi, then two guys, then three.

While Fran is sleeping, Hannah sneaks out of bed and deletes all the nude women from his phone. Seriously, Hannah? This ends badly– he’s going to notice, and you’re going to seem crazy. Then, to make things even worse, Hannah changes Fran’s screensaver to a naked picture of her.

After her crazy night out, Shosh is finally back in her apartment. When she checks her voicemail, there’s an adorable message from Scott, saying that he can’t wait to kiss her after her flight. Of course, Shosh isn’t on an airplane. And she isn’t planning to get on one, either. But poor Scott is at the airport, waiting with flowers. AND a sign that says “Shosh is the most-sh.” COME ON, why does she not want this man?!

Scott waits for Shosh for a little while longer, then gives up and throws his bouquet in the trash. As he walks towards the airport doors, all I can think is: What the hell is Shosh going to do? Why are she and Hannah treating their lovely boyfriends like crap? Will anyone in this show ever be in a stable relationship? The answer is probably no, but we can hope. Maybe the next episode will throw some sanity our way. 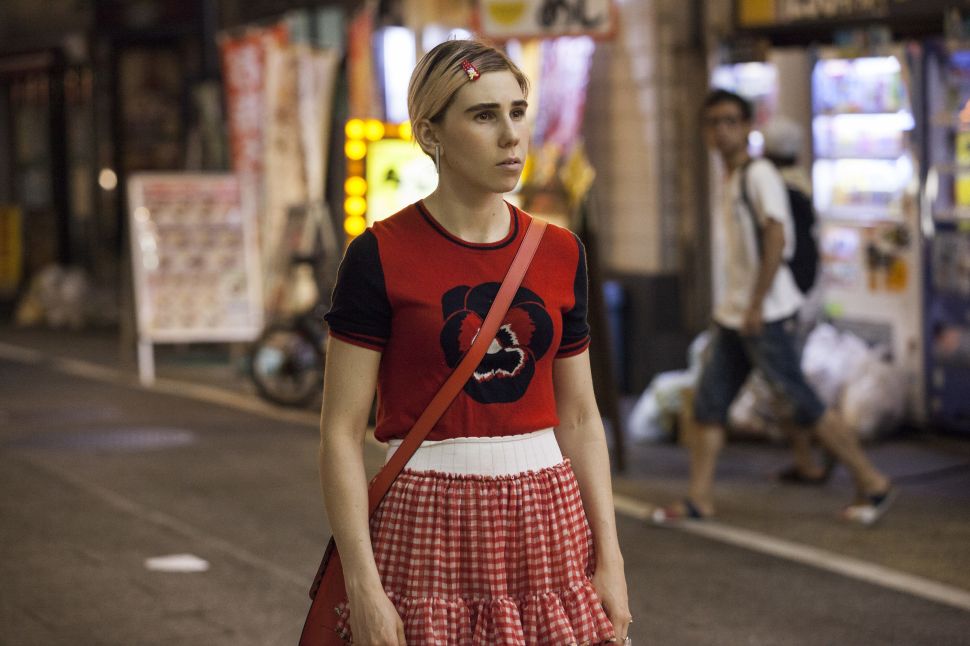