Believe it or not, Hannah actually gives her students writing assignments. Of course, she doesn’t care about grammar or structure. She just wants them to focus on creativity. But when Fran sees how liberal Hannah is being with her grading, he can’t help but take a red pen to her students’ papers. As a result, the two fight over a poem, and end up ripping it in half. Dare I say, symbolic of their relationship?

Meanwhile, Marnie is walking down the street, the image of post-honeymoon bliss. That is until her neighbor flips her the bird. Why? Turns out, Desi is completely tearing Marnie’s apartment apart. No, really. He’s putting up a wall. With power tools. That is simply not done in NYC real estate. No wonder the neighbors are so pissed! Of course, Desi argues that the $3,000 that the wall costs is the equivalent of the cups of tea that Marnie buys so she can work in a coffee shop. Clearly, his reasoning skills are not so great. Understandably, Marnie calls her husband insane for undergoing a huge, expensive construction project without asking her first. Then– giving us a little light into his past– Desi says that his mother used to call him insane. Well… that can’t be a good sign.

Cut to Jessa’s AA meeting, where a woman bravely admits that she hates motherhood. The moment is moving– until Adam creeps into the shot. Guess he didn’t realize that this is a women’s only group. Of course, he’s really there to stalk Jessa, and is happy to wait for her on the sidewalk. Once Jessa is outside, Adam confronts her and asks why she’s avoiding him. Obviously, Jessa doesn’t want to date him. Or, in her words, “It’s a horrid idea.” Then, in a moment of perfect timing, the woman from the meeting walks by and tells Jessa to be careful with men… because that’s how she got pregnant.

While this is going on, Ray sits in his coffee shop, mourning the loss of his customers to the hipster joint across the street. Elijah isn’t as invested. He’s using a shiny coffee scoop to see if there’s hair on his lower back. There’s not. He cares because he’s about to on a date with the famous Dill Harcourt. Unsurprisingly, Ray is ambivalent, but Elijah vents anyways. He’s nervous to meet Dill’s friends because they’re all famous and influential people. Elijah doesn’t know if he’s up to snuff.

At school, Hannah’s student confronts her for ripping her paper apart. Literally. So, Hannah brings the girl to Fran’s classroom and interrupts his teaching so that he can apologize. In the conversation, Hannah argues that “in ten years we’ll all be robots who speak Chinese,” so proper English doesn’t matter. Totally inspiring thing for a writing teacher to say. Lord. Understandably, Fran tells Hannah that she’s being “too much.” Hannah counters that she’s being just enough, and that he should enjoy his day with “the blood of this child on your hands.” Really, she should speak her mind more. Hannah is such an understated character.

Since they’re both hiding from their partners, Hannah and Marnie go to Jessa’s place. They don’t seem to care that she’s surrounded by books and clearly overwhelmed by work. Thinking about only themselves, the two jilted lovers look at a Tumblr of old celebrity couples and wonder why some relationships end. At this point, Hannah seems to over Fran. She claims that he’s a seemingly good guy. You know, because he’s a teacher who cares about grammar. Marnie, on the other hand, thinks that Fran is the best person that Hannah has ever dated, and she should hold onto him for dear life. I’d agree, but that would mean that poor Fran would have to stay with Hannah. Somehow, the friends’ conversation shifts something in Marnie’s brain, and she realizes that she’s the one building the wall in her relationship with Desi. Which is not true. But whatever. Everyone is nuts.

Thank God, onto a couple that’s actually cute. Elijah and Dill sit in a fancy restaurant and exchange embarrassing stories from their childhood. Then, in true dating fashion, an awkward moment happens. Elijah asks Dill if his friends are actually coming to dinner. Because, you know, if this is the kind of relationship where Elijah doesn’t meet his friends, he could be okay with that. Tear. Then, right on cue, Dill’s glamorous friends are there. Hooray, Elijah is being accepted into the celebrity inner circle!

Ready to apologize, Marnie walks back up to her apartment. Then she hears Desi screaming his head off and smashing the walls. She enters the room, and Desi admits that he’s been an idiot. Yet for some reason, Marnie tells him that it’s totally okay that he messed up her apartment. Really, he’s a “brilliant creative genius.” VOMIT CITY. I don’t know what I’d do in this situation, but I’m pretty sure it would take me longer than a day to be okay with the destruction of my apartment. And I would not call ANYONE a genius for decimating my living space.

Desi goes on to say that Marnie is a shooting star while he’s a rat in the gutter. Remind me again why Marnie is attracted to this person? Because right now he’s being plain gross. Seriously, they start making out while Desi CRIES and says how lost he is without Marnie. I’m gagging.

Meanwhile, at a rice pudding place– yep– Jessa tells Hannah that the Internet is killing her creativity. Too real. Then, getting even more honest, Jessa says that Hannah pulled her away from her studying because she’s jealous that she has a passion. She doesn’t want to be friends with Hannah anymore. OH BOY! Obviously, Hannah storms out with her rice pudding and goes to hang out with another person who hates her. But this time, it’s her boyfriend.

In a happier place, Dill and Elijah are wandering around Times Square. Everyone thinks that Elijah is famous, and asks to take pictures with the two of them. Ugh, the puppy love in Elijah’s eyes is too adorable. I’m so nervous that he’s just a fling for this famous person!

Hurt that Hannah called her a cunt, Jessa goes to Adam’s house, tears in her eyes. She tells him that she’s wanted to be with him for a really long time. It’s sweet. And then they start making out. And then they have sex. But the great thing is, it’s really bad sex– and it’s still cute. TV needs more representations of awkward, real body bumping. Kudos to Girls.

More sex! But this time, it’s Elijah and Dill. Yet no surprise here, the famous guy is a little weird in bed. He gives more commands than a general. But Elijah doesn’t seem to mind. He’s happy to please.

And now, the ending montage. Hannah is in her apartment, being horrible and totally ignoring Fran while she grades papers. Elijah, looking great in his underwear, checks out the amazing view of NYC from Dill’s apartment. Then, in the last shot, Jessa stares at a sleeping Adam. What’s that look in her eye– fear? Hope? Whatever it is, she doesn’t leave. Instead, she cuddles up and falls asleep on top of him. Looks like Jessa and Adam are together. For now. 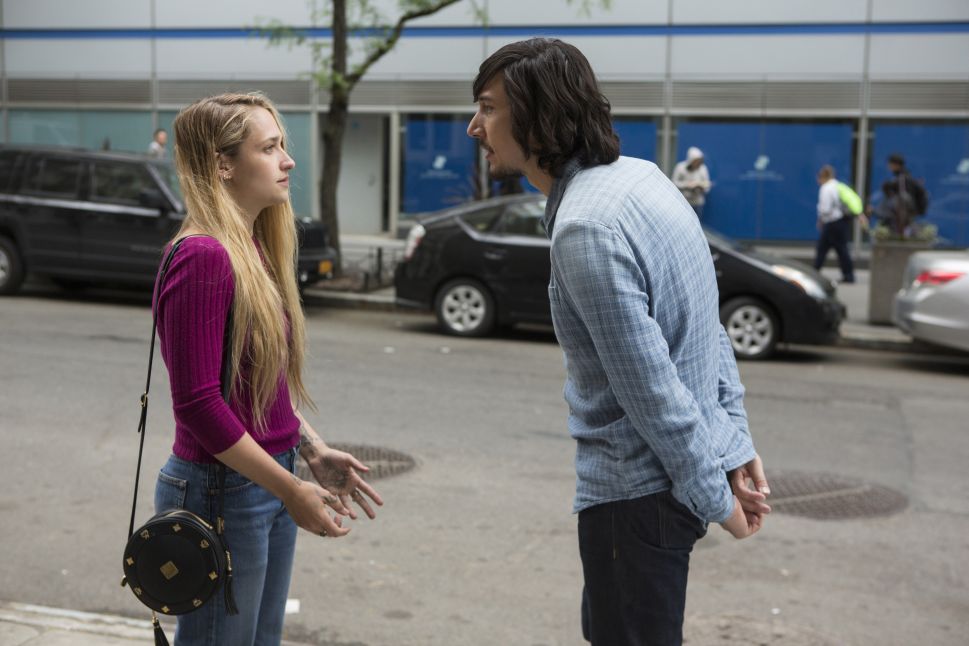