We open on Hannah in the car, reading to her mom from a retreat pamphlet entitled “Spring Queening.” This automatically sounds ah-mazing, especially when Hannah describes the event as a chance to “celebrate being a multi-ecstatic woman.” But, in a weird twist, Hannah’s mother is the one trying to convince her daughter to go with her! Why? Poor Mama Horvath is trying to decide if she really wants a divorce, and if she wants to spend the rest of her life married to a gay husband. Because, apparently, they still have sex. AND it’s better than ever. Well, that’s confusing. No wonder she needs some time to herself!

Cut to Shosh working at the most adorable place on earth, or at least in Japan– a cat cafe. Yoshi is there to spend his lunch hour with her. It seems like they’re a couple now, since he kisses Shosh on the cheek when he leaves. And who comes in after him? Abigail, the American boss who just fired Shosh from her dream job! First, Abigail apologizes for “taking a spiked dildo and ramming it into your heart hole.” Well said. Yet surprisingly, Shosh is totally okay that she got fired. She still loves life in Japan, and is determined to show Abigail around. That’s the spirit!

At the lobby of the retreat center, Hannah is determined to stay snarky. I’m sorry, why? Retreats are meant for releasing your inner yogi Goddess, no matter how stupid and uncool you might feel. Yet Hannah is just pissed that she can’t use her phone.

Later that night, alone in their room, Hannah’s mom spits some hard truth: Hannah doesn’t want to be with Fran because she can’t handle someone who’s kind to her. Oof. Instead of this turning into an argument like I anticipated, a sweet mother-daughter moment actually happens! Turns out, Mama Horvath is worried that her troubled marriage messed up Hannah’s relationship with men. But, Hannah tells her that’s absolutely not true. From the look on her face, it’s clear how relieved her mother is to hear that.

And now for the opposite of a mother-daughter moment, Jessa and Adam doin’ it. Hard. When he’s about to finish, Jessa tells Adam to finish inside of her, then pretend to freak out like he got her pregnant. She’s wearing a sponge, so it’s fine. (Who wears a sponge?) Different strokes for different folks. Then, in their post-coital bliss, Jessa drops the news that her sister will be in town for dinner. Looks like Adam is about to meet the family!

Back at the retreat, Hannah and her mom are doing a series of absolutely ridiculous self-empowerment exercises. Walking around and “leading with their cunt.” Feeling bushes while blindfolded. And, for some reason, Hannah thinks it’s appropriate to hike in a swimsuit? Finally, she leaves her poor mother alone and Facetimes her dad. Of course, she only has about two seconds until a bunch of yoga moms give her the side eye and she has to put her phone away.

Walking through the streets of Japan, Abigail drops yet another amazing one-liner: “I feel like I’m walking through Katy Perry’s vagina.” Then, Shosh brings them to a spa where they put their feet in a tank where fish nibble your dead skin off. Yes, guys, that is a real thing.

Meanwhile, Hannah gets into a conversation about Fran with a woman eating goji berries. Superfood woman thinks that nice people are really just hiding their inner asshole. Then, she gives a fantastic piece of advice that I’ll be giving to all of my friends from now on: “You’re way too luscious to be with the wrong guy.” Apparently, this gives Hannah the push that she needs to enjoy the retreat, because now she’s dancing with her fellow retreaters, wearing a sports bra, and shaking it with reckless abandon.

While this is going on, Jessa preps Adam for their dinner with her sister. Just a little bit of background: Minerva slept with Jessa’s father. Who she’s not technically related to, but WHATEVER. Why does Jessa seem to think this is totally fine?! Adam, on the other hand, is suitably weirded out– especially when Jessa gives him permission to fuck his sister.

In retreat land, all of the ladies are bragging about the horrible low-cal, low-salt, low-fat foods they’ve eaten at other spas. Gag. So, Hannah storms off to emotionally eat the low-carb bread from the buffet. Then, goji berry woman finds her and asks if she can stretch Hannah out. Hannah, despite being told by her mother that she can’t center herself emotionally or spiritually, agrees. Suddenly, they’re in a sauna, and Hannah is balancing on top of this super hot woman’s very toned legs. After a few moments she falls, and the two women giggle with their bodies pressed against each other. Of course, they make out– and Hannah ruins the mood by saying that she’s never had sex with a woman. But somehow, it’s still on.

Meanwhile, Mama Horvath is talking to the other ladies about why they’re at a retreat. The best line: “I love being single. Just give me a good book and a bottle of wine, and there you have it. The perfect morning.” Yet, when Hannah’s mom says that she’s there because she just found out that her husband is gay, the others completely dismiss the problem. What is wrong with them? One actually says, “I would kill for a gay husband.”

And so is Jessa’s family dinner. Her sister explains that her trust fund doesn’t count as an income, so she can also get social security. Vomit. Yet surprisingly, Jessa doesn’t insult her sister, like she would any other human on the planet. It quickly becomes apparent why. Jessa wants money from her sister so that she can go to school to become a therapist. Well, Minerva thinks that Jessa won’t graduate, because she’s never committed to anything in her life. At this point, Adam can’t help but add in that Jessa “is a beautiful fuckin’ rainbow, cunning and sublime.” Well, that’s definitely not true, but it’s a sweet sentiment. Boyfriend points to you, Adam. Except he takes it a step further by saying that HE will pay for her school. Well, shit. That was not expected. And perhaps a step too far on the relationship commitment scale. But he’s an actor. He’s impulsive. What else should we expect?

At a sushi bar, Yoshi says how proud he is that Shosh has learned so much about Japan. And … that he wants her to meet his grandma. And they should lose their virginity to each other.Hold up, WHAT? Lololol that he thinks that Shosh is a virgin. Understandably, when Yoshi leaves to go to the bathroom, Shosh bursts into tears and admits to Abigail that she’s homesick. Poor woman.

At the retreat, Mama Horvath tells Hannah that she’s decided to stay with her father. Then, in a great moment of loving support, Hannah counters with, “I think you guys really did fuck me up.”

We end with Shosh, walking down an empty street lined with bright signs, in an outfit that blends in with the culture perfectly– but a face that says that she desperately wants to return to the States. 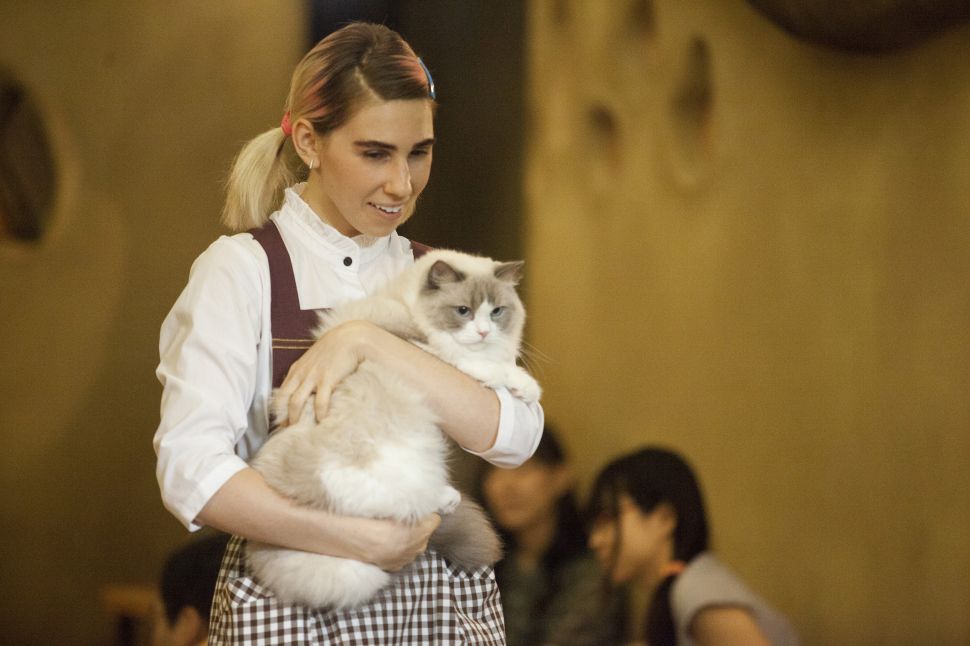