What do the Marfa desert, Grand Central Terminal and Yoko Ono all have in common? They’ve all been part of public art projects made possible by Art Production Fund, the New York City nonprofit responsible for backing and producing some of the most ambitious Contemporary artworks of the last 15 years.

For Yvonne Force Villareal and Doreen Remen, the fashion-savvy art mavens who founded APF in 2000, no artistic vision is too daunting.

The pair were early supporters of Vanessa Beecroft, for example, producing her seminal 1998 performance SHOW at the Guggenheim (the work, in which Ms. Beecroft assembled 15 beautiful models sporting Gucci bikinis throughout the rotunda, was considered revolutionary at the time). And it was also them who helped Italian artist Rudolf Stingel cover Grand Central’s monumental Vanderbilt Hall with a floral carpet that you might find in a casino. Meanwhile, the duo’s work with Elmgreen & Dragset in Marfa, Texas, needs no introduction: the fake Prada store along the side of a desert highway has become a mandatory art world pilgrimage.

When the Observer met with Ms. Force Villareal, Ms. Remen and APF executive director Casey Fremont at their modestly sized Soho office one frigid February morning, the three women were fine-tuning their latest collaboration, Ugo Rondinone’s Seven Magic Mountains. The work, which is located a stone’s throw from the Vegas strip in Nevada’s Mojave Desert, is composed of seven 35-foot totems made out of stacked boulders ablaze in Day-Glo pinks, blues, oranges and yellows, all of which have been sourced from a local quarry and hand carved with a diamond cutter. Five years in the making, the sculpture will rise over the horizon, sort of like Stonehenge on acid, for those driving down I-15. It opens May 11.

Ms. Remen and Ms. Force Villareal have never claimed to be artists themselves. Rather, their role is to facilitate collaboration and ensure an artist’s vision is made a reality and—most importantly—made visible.

“It’s definitely our biggest project to date,” said Ms. Remen, who, like her colleagues, was wearing head-to-toe black. “[It’s] a land work, which was born in the West—Mexico and Nevada—and is really the first that was started and [will be] finished in the 21st century.”

Incidentally, the work is just a short distance from Jean Dry Lake, where land art titans Jean Tinguely and Michael Heizer created major earthworks. Seven Magic Mountains is both an effort to pay homage to the land art movement of the 1960s and ’70s—a time when major artists moved out West, favoring the landscape as their canvas by carving into it or building giant structures—and the first work of its genre to be completed in roughly 40 years.

“Seven Magic Mountains elicits continuities and solidarities between human and nature, artificial and natural, then and now,” according to Mr. Rondinone.

Not surprisingly, the project has been no mean feat. Partnering with the Nevada Museum of Art, APF has been in endless negotiations with the Bureau of Land Management to secure permits, and, while the mountains are already assembled in the aforementioned quarry, they won’t be trucked to the site until the foundations are poured a few weeks before the installation opens.

“We would love for it to be permanent; we always like to keep that as an ideal scenario,” Ms. Remen said. “But right now it’s meant to be up for two years.”

Ms. Remen and Ms. Force Villareal have never claimed to be artists themselves. Rather, their role is to facilitate collaboration and ensure an artist’s vision is made a reality and—most importantly—made visible. They choose projects both big and small, collaborating on everything from a “global rainbow” projected across New York City in the wake of Hurricane Sandy, to an annual collection of illustrated beach towels.

“Each project in Art Production Fund has its own unique identity,” Ms. Force Villareal said. “[We] select it for the merit of the project and not because of one huge curatorial endeavor.”

It’s a potent combination of self-assurance, enthusiasm and connections that make Art Production Fund roll, the fruits of a storied friendship that began when the duo met as students at Rhode Island School of Design. Nowadays, the founding women are both married—Ms. Remen to an attorney and Ms. Force Villareal to the light artist Leo Villareal—and have been staples of the New York party circuit since the ’90s. Regularly spotted on the city’s most coveted guest lists—as well as on the odd sojourn to Burning Man—they have developed an invaluable network of fashion names, artists and dealers to help raise the profiles of artists. Notably, an early financial backer of Ms. Force Villareal was Laurance S. Rockefeller.

‘At the end of the day they are passion projects. So we’re lucky we’re all passionate about similar things.’ —Doreen Remen

Ms. Fremont, on the other hand, joined APF as a 16-year-old intern, around the same time the company was first formed (Ms. Force Villareal’s Tribeca loft served as an office). A Greenwich Village native, she was no stranger to the art world—Ms. Fremont’s parents, Shelly and Vincent Fremont, were considered part of Andy Warhol’s “inner circle”—and she quickly concluded APF was her “dream job.” After a chance meeting with Ms. Remen in Chelsea shortly after graduating college, she was snapped up by the firm permanently.

“There’s this great trust that I think is really unique in a work environment, maybe because we are so small,” Ms. Fremont said. “[We have] this amazing history and crazy experiences that we’ve gone through together. It really allows us to work organically. Obviously Doreen and Yvonne started [APF], so it’s their baby, but we all feel equally connected.”

“We’ve grown up together,” Ms. Remen chimed in. “Art Production Fund is kind of this group effort we’ve all built and I think that’s why it works very easily. At the end of the day they are passion projects. So we’re lucky we’re all passionate about similar things.”

That trust extends to the artists they work with. Most recently, APF co-presented a performance by the Los Angeles-based duo Gerard & Kelly at Schindler House in West Hollywood, set to open in Connecticut at The Glass House this spring. The proposal for the piece, which explores themes of queer intimacy and the domestic space within the legacies of Modernist architecture—another ambitious project, to be sure, but perhaps more conceptually large than in scope—only landed on APF’s desk last October. By the time January came around, the performance was already in production.

“What I found so unique about [the experience] is their enthusiasm. I mean, first and foremost, there’s the glamour, because they are pretty glamorous,” Ryan Kelly of Gerard & Kelly told the Observer. “They are…not jaded. They’ve seen a lot of corners of the art world, but they remain really interested in the ideas.”

One of their skills, Mr. Kelly noted, is an ability to contextualize an artist’s project and present it to their colleagues and peers.

“They have a deep understanding of the artistic process and, you know, that it costs money,” he said.

As a nonprofit, APF is not shy when it comes to raising funds for future collaborations. Sometimes, they said, it simply involves building relationships with brands or philanthropists. On other occasions, getting the cash becomes a more creative process.

Ultimately, APF believes there needs to be more money going to public art from the private sector. But until that happens, APF is around to fill in the gaps. “We reach out and find those people,” Ms. Force Villareal said. “We kind of just make it all work.”

“A major panic happened on a couple of projects, which lead to making editions with the artists,” Ms. Force Villareal explained. “With Rudy’s carpet, we sold it as an edition—12 of these area rugs made from the same carpet. And with Elmgreen & Dragset, we sold the big signs that said Prada Marfa, with the number of miles from the collector’s home to Marfa.”

Ultimately, APF believes there needs to be more money going to public art from the private sector. But until that happens, APF is around to fill in the gaps. “We reach out and find those people,” Ms. Force Villareal said. “We kind of just make it all work.”

The biggest night on APF’s calendar is unquestionably its annual gala. A who’s who of the art, society and fashion worlds, the night is a celebration of the arts that funds the company’s overhead and operating budget. On March 16, the trio will take over the Diamond Horseshoe with a Concrete Jungle theme (last year was Gangs of New York, requiring an aptly named “On the Fringe” dress code). Sponsored by Gucci and honoring photographer Ryan McGinley and painter Jane Kaplowitz, works by names like Alex Katz and Kenny Scharf will be auctioned off, current suis generis Petra Collins is set to perform her latest work and there will be temporary tattoos and Steven Klein taking guests’ portraits.

“I think that they have paved the way for a creative producer in the Contemporary art world, a role that wasn’t automatically assumed by the gallery,” said Wayne Northcross, chief consultant of the art advisory service ArtKapusle and Observer contributor. “That is, to have someone come in and want to have conversations with dealers and artists about other funding possibilities—whether that be a fashion house like Prada or institutions like the Guggenheim. They really want to support artists and that’s what a lot of us want to do in the business.”

Both in scale and cost, Mr. Rondinone’s Magic Mountains is APF’s most ambitious project to date. The most recent estimate for the project is around $3 million upon completion and the trio is hopeful it will see a similar evolution to Elmgreen & Dragset’s Prada store. While the artwork still requires a lot of upkeep—over the years Prada Marfa has been spray painted, broken into, defaced and even shot at—the three women described the project as one that has “manifested magically.” Last year, the work officially achieved museum status and became a permanent roadside fixture. According to Ms. Force Villareal, every time she passes the site there is still “at least one 18-wheeler, two cars and a photo shoot going on.”

“None of us ever imagined how much exposure Prada Marfa would get over the years,” the artists told the Observer. “Art Production Fund fills a position that no museum can.” 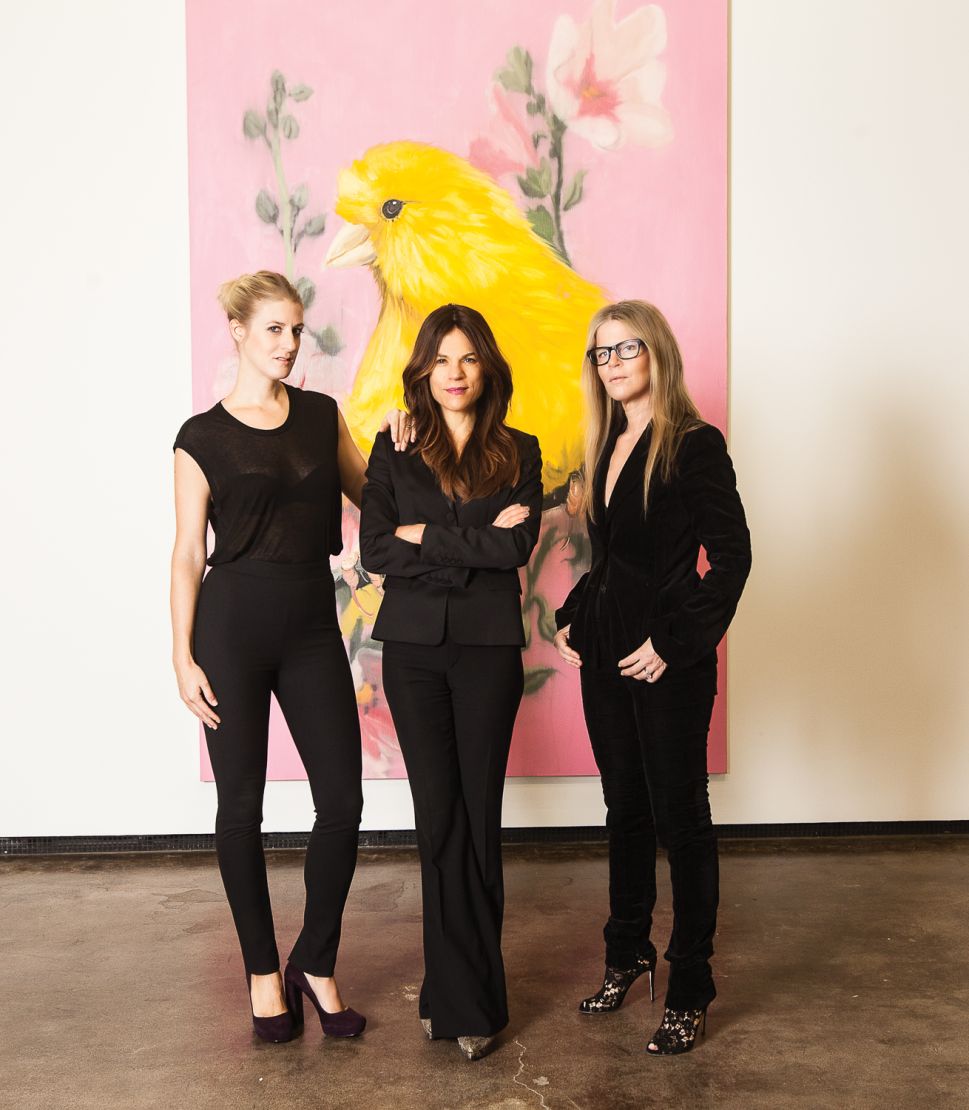