Good morning! Let’s talk about some horrifying serial killers. No, not like “Yahar I drew a question mark over your face your day will come!” type of horrifying. Like, murdered 21 people and wrote a book about it type of horrifying. Hey, don’t blame me, blame Gotham, which titled this week’s episode “This Ball of Mud and Meanness,” taken straight from this quote by notorious serial killer Carl Panzram:

“hurry up and bring on your electric chair I want to leave here and take a nose-dive into the next world just to see if that one is as lousy as is this ball of mud and meanness. I am sorry for only two things. These two things are I am sorry that I have mistreated some few animals in my life-time and I am sorry that I am unable to murder the whole damed human race.”

That is deeply unpleasant, Carl.

I suppose this quote is supposed to take us into the mindset of one Matches Malone, played here by Michael Bowen. You may remember Mr. Bowen from his stint as a crazy Nazi uncle on Breaking Bad. Here he’s more of a sad Nazi surrogate father, haunted by the cries of a fat mustachioed man but barely remorseful–or even aware of the fact–that he shot Thomas and Martha Wayne in an alleyway. Bruce Wayne and his adorable baby gun are here to remind him, though.

I….genuinely loved this; completely, unironically loved the performances put in by both Mr. Bowen and David Mazouz, who at 15-years-old can display more complex emotions with his face than I’ve ever had actual complex emotions. Of course, yeah, there is always a part of me that wishes Gotham would stick a middle-finger directly into the camera and say “screw your canon, nerds!” and have a young Bruce Wayne shoot a Breaking Bad Nazi in the face.

But no, this worked, and it worked because of Matches Malone begging Bruce to do it. One of the most baffling things about an already baffling character like Batman is that weirdo’s stubborn refusal to kill no matter what. I’m not sitting here in a Gotham recap advocating murder but like, break out of Arkham once shame on you, break out of Arkham 56 times and maybe I should throw you off a crane, you know? So the first time the chance to commit murder is genuinely presented to Bruce, he needed to see that killing the wingnuts Gotham City produces not only won’t help, but it’s basically giving them what they want. They’re all damaged, and they crave that shit. They’re busted and broken and want on to the next ball of mud and meanness in the hope it’s filled with less pain and is more accepting of spandex outfits covered in question marks.

Here’s the problem with the episode’s final moments in which Bruce takes to the streets, besides the fact that “the streets” is the most billionaire-white-kid phrase ever. It’s a simple problem–dude should be dead in, minimum, three days no matter how many feline-themed 13-year-olds are giving him a place to sleep. Remember Terrence “Cupcake” Shaw’s reaction to Bruce’s name? “Boy billionare Bruce Wayne?” he yelled in like fourteen different accents at once. People know who Bruce Wayne is. Really, really dangerous violent people know who Bruce Wayne is. This is like if Donald Trump Jr. wrote a letter to his dad saying “Don’t call me crazy, but I’m going to live on the streets of New York to get a feel for how this city really works.”

Bruce Wayne leaving Gotham City at a young age to go train with ninja assassins led by Liam Neeson’s goatee is slightly more implausible, yes, but makes more sense in the universe Gotham created. Ninja assassins don’t give a shit about your bank account as long as you drink their spooky vaguely-Asian martial arts potions, or whatever. But random Gotham City thugs? I mean, good luck, especially if this is your idea of “being inconspicuous.”

Again, though, if you’re asking me to stay mad about a show where Sean Pertwee’s Alfred repeatedly calls a man Mr. Cupcake as he beats the shit out of him, you can just exit right the heck out of my recap (please don’t do that).

Elsewhere, B.D. Wong earns my vote for Best Actor in the Universe simply for the way he draws out the end of the word “saneeeeeeee,” and Oswald Cobblepot received a diploma slightly more legitimate than a lot of US colleges. He’s cured, though. He’s cured because he didn’t fight back against a much, much larger man assaulting him over ice cream.

As always, let’s run down every reference, fact, and nugget of Bat-history brought up in the season 2, episode 114,”This Ball of Mud and Meanness.”

Is Jeri The Joker BUT FOR REAL THIS TIME?

Gotham‘s approach to the Joker went from a, well, joke to pretty much pitch perfect–because everyone is the Joker, and no one is The Joker. If you’ve been looking closely, the walls and sets of Gotham have been plastered with smiles and HAHAH graffiti ever since Jerome got Galavan’d in the neck. The entire city is filling itself with multiple choice options for a future Clown Prince.

How great was Lori Petty, though? And I’m not just saying that because Point Break is a modern-day masterpiece deserving of endless praise (Keanu Point Break, not “X-TREME ATHLETES LIKE ME” Point Break). She was so damn charismatic she only highlighted further Gotham‘s biggest problem: the GCPD–and especially Jim Gordon–are the most uninteresting, useless part of this show. I don’t know if I’ve ever seen lazier writing than “the reason Matches Malone wasn’t a suspect is because our files weren’t updated! D’oh!” Stellar, stellar detective work gentleman. Try not to get overwhelmed by a crowd of sweaty concertgoers on your way to the next crime scene.

Alfred vs. The Mutants

I will never tire of the chemistry between David Mazouz’s Bruce Wayne and Sean Pertwee’s Alfred. I’m pretty sure Alfred dishing out fight-advice while fighting a giant cupcake was written specifically for me. The question is: did Bruce take the advice to heart? Oh yeah he did; many, MANY years later, in a similiarly mismatched fight against a similiarly gigantic opponent, in the middle of the same exact gang–The Mutants.

“If you’re going to beat a big man, all you have to do is outlast him.”

“One day I am going to do something to help the people of Gotham. I don’t know what yet….”

But what is Nygma up to?

This is clearly Eddie Nygma’s first steps in his quest to becoming one of DC Comics’ most recognizable characters: 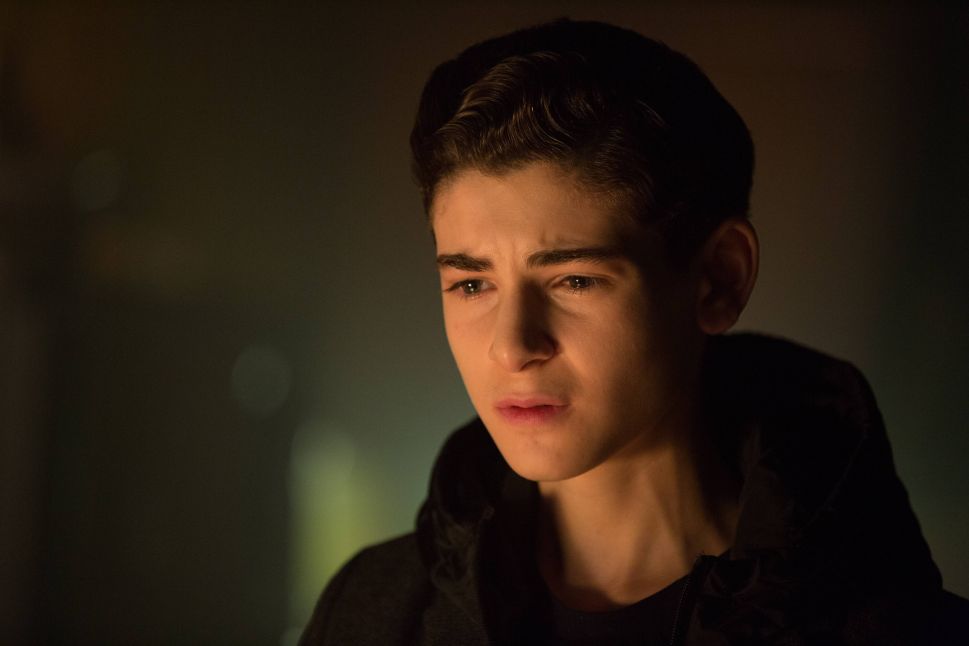