Just to get it out of the way, let me recap every interaction between Captain Barnes and Jim Gordon in “Mad Grey Dawn:”

In between Michael Chiklis yelling like the world’s angriest Easter Island head and Ben McKenzie gritting his jaw so tight I was afraid he was going to somehow end up eating his own face this episode of Gotham, while not the most exciting, set up a few doozies for down the road.

For one, Eddie emphasized the Nygma in his name and gone full-Riddler, minus the question-mark-covered green spandex (which Zod as my witness, FOX, better be coming before this season ends). On one hand I was actually impressed with the cleverness of the writing involved with Eddie’s plan to implicate Jim in the murder of Theo Galavan. On the other hand, his plan could have been a trail of candy leading to a giant box leaning on a stick with a sign saying “Criminals Under Here” on it, and Jim Gordon probably would have been suitably fooled. This is the same Jim Gordon whose plan to get rid of a bomb was “throw the bomb into another room.”

But no, this is good. Actually, this is great. Gotham is either slight hit or WIDE MISS in capital letters and neon lighting when it comes to how it handles the pathos of a person becoming a supervillain, and the Riddler is, no surprise, usually one of the harder to get right. The thing about the Riddler is, it’s usually not very clear if he even likes crime. He’s just a dick, a really, really smart dick, and committing crimes just so happens to be the quickest avenue to proving how smart he is. Eddie Nygma must be the smartest man in the room, which is why he hates the shit out of the World’s Greatest Detective.

But that particular detective is busy right now honing his fighting style–the art of “getting punched in the face repeatedly”–so Eddie has to deal with Jim, who I assume ties his own shoelaces together minimum three times a day. Cory Michael Smith is hamming it the hell up in Eddie’s transformation into full-blown villain, and it’s a damn joy. Eddie isn’t even nervous Jim will get to the truth about Krysten Kringle, which you might remember is that Eddie choked her to death. To Eddie, that’s whatever at this point. Eddie is just pissed Jim had the balls to not consider him important–or clever–enough to give two seconds input on the search.

Elsewhere, Oswald Cobblepot learned the secret word of the day is “UNCOMFORTABLY SKETCHY FAMILY” when he meets his long-lost father, Elijah Van Dahl, played by none other than Paul Reubens. Depending on how old you are, you either remember Reubens for playing Pee-Wee Herman in a theater, or for playing with his Pee-Wee Herman in a theater. Either way, Gotham guest stars usually seem like they skip catering and go directly to chewing every piece of scenery they can find, and Reubens is no different nor less fun to watch. As for the “family” he introduces Oswald to well, more on them in a little. Let’s just say they seem like a real HOOT.

Hoot like…like an owl? Like…sigh just wait until the reference stuff at the bottom.

Finally, Eddie’s grand plan culminates in the murder of plot device/character-I-guess Carl Pinkney, whose faked eyewitness account places Jim as Theo’s murderer. Now, I don’t really understand why Barnes and his massive head’s first thought is “You were set up? GIMME A BREAK.” How long has he been working in Gotham City? Since Barnes became a character haven’t there been, like, four or five cases involving someone getting set up? Didn’t Barnes come to Gotham in the first place because the GCPD is so full of corruption and deceit? Well, woopsy-doozle I guess Gotham isn’t sure either because there’s a four-month time-jump and Jim is off to Blackgate Penitentiary.

For those wondering, Blackgate is sort of like Arkham but instead of the inmates dressing up in colorful costumes and committing cuhraaazy themed crimes they just stab you a whole bunch to death.

As always, let’s run down every reference, fact, and nugget of Bat-history brought up in the season 2, episode 15,”Mad Grey Dawn.”

Before the mid-season break, Gotham aired a delightfully stupid episode titled “Tonight’s The Night,” which I thought did a fantastic job setting up Barbara Kean as Jim Gordon’s ultimate arch-nemesis, the blonde female Joker to his incompetently stupid Batman. So when Barbara awoke in Arkham Asylum seemingly to the sound of Jim Gordon’s name on the television, it immediately brought to mind Frank Miller’s Dark Knight Returns, and the moment a comatose Joker gained his senses thanks to the Dark Knight doing all that returning. 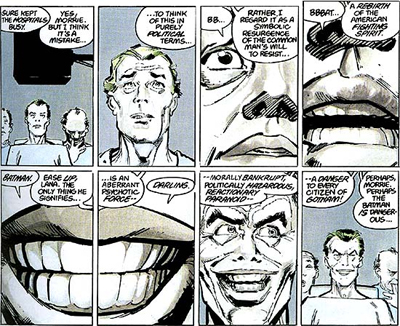 Who is Elijah Van Dahl?

But everything about Elijah and his “family”–the formal old-money elegance, the long-extending Gotham City lineage, the wealth, the attire, the fact Penguin didn’t even know they existed–points a talon toward an organization that showrunner Bruno Heller himself said was coming–The Court of Owls. Basically, the Court is like if the Illuminati adopted an owl motif and replaced Jay-Z with undead assassins called Talons. They have run Gotham City in secret since it was founded, a fact that reallllllly pissed off Mr. Gotham himself, Bruce Wayne.

I mean, the Van Dahls could very much so just be vaguely incestual family with hook-nosed genetics, but there are signs. Speculative, speculative signs. Like this owl-ish wall decor:

Your move, Gotham. Ball is in your court. Um, of owls. 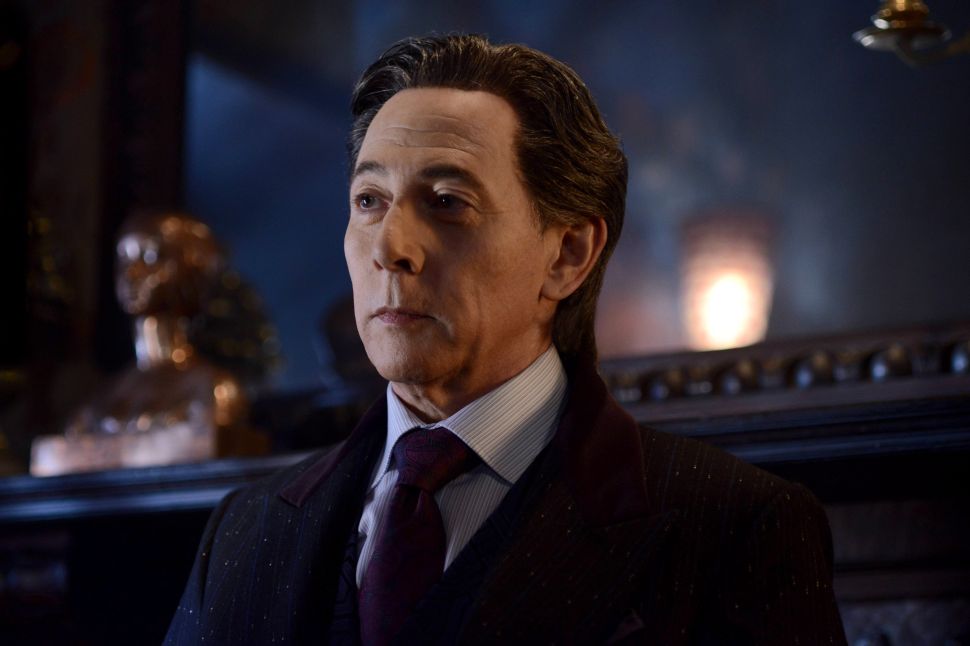