A group of construction unions and community organizations released a new online ad attacking Mayor Bill de Blasio’s affordable housing plan—echoing longstanding concerns that the apartments created under his proposals will be unattainable for low-income tenants.

The Real Affordability for All coalition’s video attacks what the group  views as a contrast between the egalitarian rhetoric of Mr. de Blasio’s 2013 campaign, and an affordability program that predominantly targets lower-middle and middle-class tenants. The ad features footage from several protests of RAFA member organizations.

“Bill de Blasio was elected on the promise of ending the tale of two cities,” a title card reads. “But his developer-backed housing plan leaves out hundreds of thousands of the city’s most vulnerable.”

RAFA has targeted two aspects of the de Blasio plan: his mandatory inclusionary housing proposal, which would require developers citywide to set aside 25 or 30 percent of new apartments for below-market tenants—apartments priced for a family of three making an average of either $47,000 or $62,000 a year. The group also has attacked the mayor’s plan to rezone individual low-neighborhoods to allow real estate interests to build taller in exchange for allocating even more units for lower-earning families.

The first area targeted in the plan would be Brooklyn’s East New York, where the median income is roughly $33,000 annually, but where the new affordable housing would cover incomes running from $31,000 to $50,000.

The group said the ad was intended to highlight the human aspects of what has largely been a technocratic debate.

“The video just shows the people this coalition has been fighting for all along. Real tenants who have been left behind of a housing plan that should be benefiting them in the first place,” Real Affordability for All spokeswoman Maritza Silva Farrell told the Observer.

The mayor’s office has long argued that its plans represent a floor and not a ceiling on affordability—that changing zoning laws to require middle-class set-asides will allow the city to allocate its limited subsidies exclusively to low-income tenants. But it has also claimed that requiring more and cheaper apartments than laid out in its current proposals will make development unprofitable, and result in reduced construction just as the city’s population is expanding.

“This is the toughest mandatory policy in the country. It works together with other city dollars to serve more low-income New Yorkers than ever before. That’s going to help keep our neighborhoods diverse,” said city spokeswoman Melissa Grace.

Nonetheless, community boards and borough boards across the city have called on the Council to reject the plan in its current form.

Watch the full ad below: 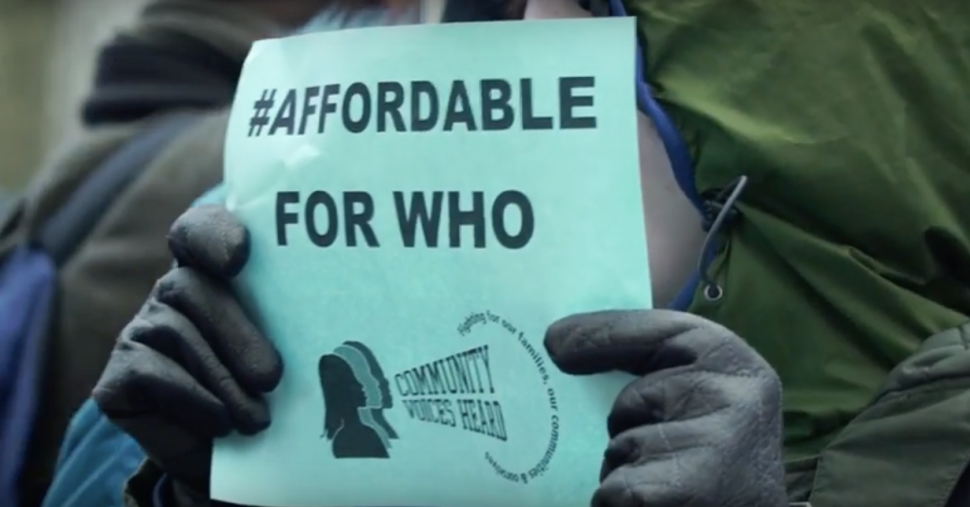