If you haven’t heard of Hale Appleman, you will soon. The 30-year-old New Yorker plays the charming, secretive lush Eliot Waugh on SyFy’s The Magicians, the adaptation of Lev Grossman’s bestselling book trilogy of the same name. With his hedonistic nonchalance and Oscar Wilde sense of humor, Eliot has quickly became a fan-favorite. We sat down with Hale in New York to learn more about what makes a magician tick.

So you’re from New York?

Born in the village. My mom still lives on Bleeker Street. I went to the performing arts high school.

So you knew you were doing this from a young age.

Pretty much. From about ten, I knew I wanted to be an actor, and I started doing vocal shows and stuff.

Did you ever have a crisis of faith? Thinking you should be doing something else?

I think actors are meant to have crises of faith; I think it’s part of the job. I think it makes you a stronger person, and a stronger actor. So yeah, for sure.  But I never had a backup plan. I went to Carnegie Mellon for a year and a month or two and then I dropped out because I got a movie. I didn’t anticipate ever leaving school–I was a really serious drama student and then, that happened, and my life sort of took a turn.

When you say serious drama student….

I went to drama summer camp–French Woods–and I went there for four years. And I always did summer theatre programs before that, and I did children’s theatre when I was ten, in the city, at TADA! which is a children’s theatre, and they’re amazing actually.  They bring all sorts of kids who grew up in New York City together to perform from all walks of life, super diverse. They taught me about dedication, and rehearsal, and being on time. It’s amazing. I can’t say enough good things.

“I appreciate actors who have the ability to humanize and transform at the same time.”

So you were in Teeth [the controversial horror film about vaginal dentata]. What’s the most common thing people want to know about that experience?

Most people just worry about my health.

So is everything okay down there?

Everything is fine [laughs]. Regeneration is a bitch. Strangely enough we aren’t the characters we play.  That was a film where my agents were like, “Do you really want to do this movie? Are you sure?” and I was like, “Yes. Absolutely. I get it. I get where it’s going. I see its appeal, and I see the reason for doing it.” So that was a weird no-brainer for me, but I’m weird.

How old were you when you did it?

So you’re not the characters you play, but what are your similarities to Eliot?

I guess I would say Eliot is much less free with his emotions. He’s kind of safeguarding his emotional life and locking it up.

What’s your ideal level of fame?

The point at which people say, “He’s a really good actor; I’d like to go see that because he’s in that.” But not like tabloid-y.

Is there an actor that you say that about?

[Philip Seymour Hoffman] inspired me so much, and he was a real New York theatre guy. He came to see everything in New York, and I did a lot of theatre in New York when I lived here forever. And he would come and see everything. And I got to meet him a couple of times and he was just the most genuine, down to earth actor’s actor. And I really respected that. I appreciate actors who have the ability to humanize and transform at the same time and you always felt his heart; that’s important.

So what’s the difference between doing theatre and doing a TV show?

Pace. The speed at which you shoot. We shoot about seven days an episode, which is really fast, so some says we’re shooting seven pages, and some days we’re shooting twelve. That’s incredibly fast, especially compared to a film, where you would probably shoot three or four pages a day. So that’s the biggest difference.

With theatre, you’re rehearsing for a month to fine-tune and continue to evolve the same words over however long the run is, however long your rehearsal process is. With TV, you get a few takes, maybe, if you’re lucky, to get something right spontaneously in the moment, on the day that you’re shooting. So it’s really about time and space. And the time and space you have to create something.

With theatre, you can change things night-to-night. Are there choices you made as Eliot you would do differently?

It’s really hard to watch myself.  It’s not my favorite thing. But, you know, yeah, there are things I would change for sure. For sure. But then again, at the same time, I’m shooting, and let’s say we do three or four takes of one section,  I might give them options to edit together so I don’t know what they’re going to edit together. That’s not my call.  It’s above my station.

“I think that sex, and shame, and guilt, and deviance are part of Eliot”

It’s like you’re on a reality show. They can edit you into anyone.

TV and film is a real leap of faith. And you’ve got to just trust the people that you’re working with and luckily we have an incredible group of people. And everyone’s hearts are just in this project 100 percent. That’s kind of rare, I think. Especially for a TV show that can skew mainstream in certain ways, I think we have a beautiful group of people who are conscious of community and building these worlds together. I love the actors that we’re working with, and the crew is the best crew in the world.

So you’ve read the [Magicians] books?

I read all the books while I was auditioning. My best friend gave me the books when he heard I was auditioning for Penny. The one-line blurb about Penny was that he was punkish, but with a Clockwork-Orange-like attitude, which is something I feel like I could connect to, but that’s not the whole picture of the character.

It’s interesting you auditioned for Penny.

I think that sex and shame and guilt and deviance are part of Eliot, and there are sort of references to that kind of activity in the season. There are also instances where Eliot will be paired next to a sweet-looking blonde freshman boy, and that’s very intentional.  Maybe the fact that we’re in grad school means it can be a little more public; that event [in the book] was really private and intimate. It’s a big secret. I’m a big fan of private Eliot glimmers. I try to pepper the scenes with them.

You know how Lev [Grossman] writes about Eliot gazing into the middle distance or loping across the campus; it’s sort of the opposite you’d expect from someone who’s so the life-of-the-party. So I appreciate those moments where he gets to be a little more internal, whatever he’s wistfully dreaming about, or regretting. There’s a lot of darkness and a lot of pain in his past that he’s trying to hide from. 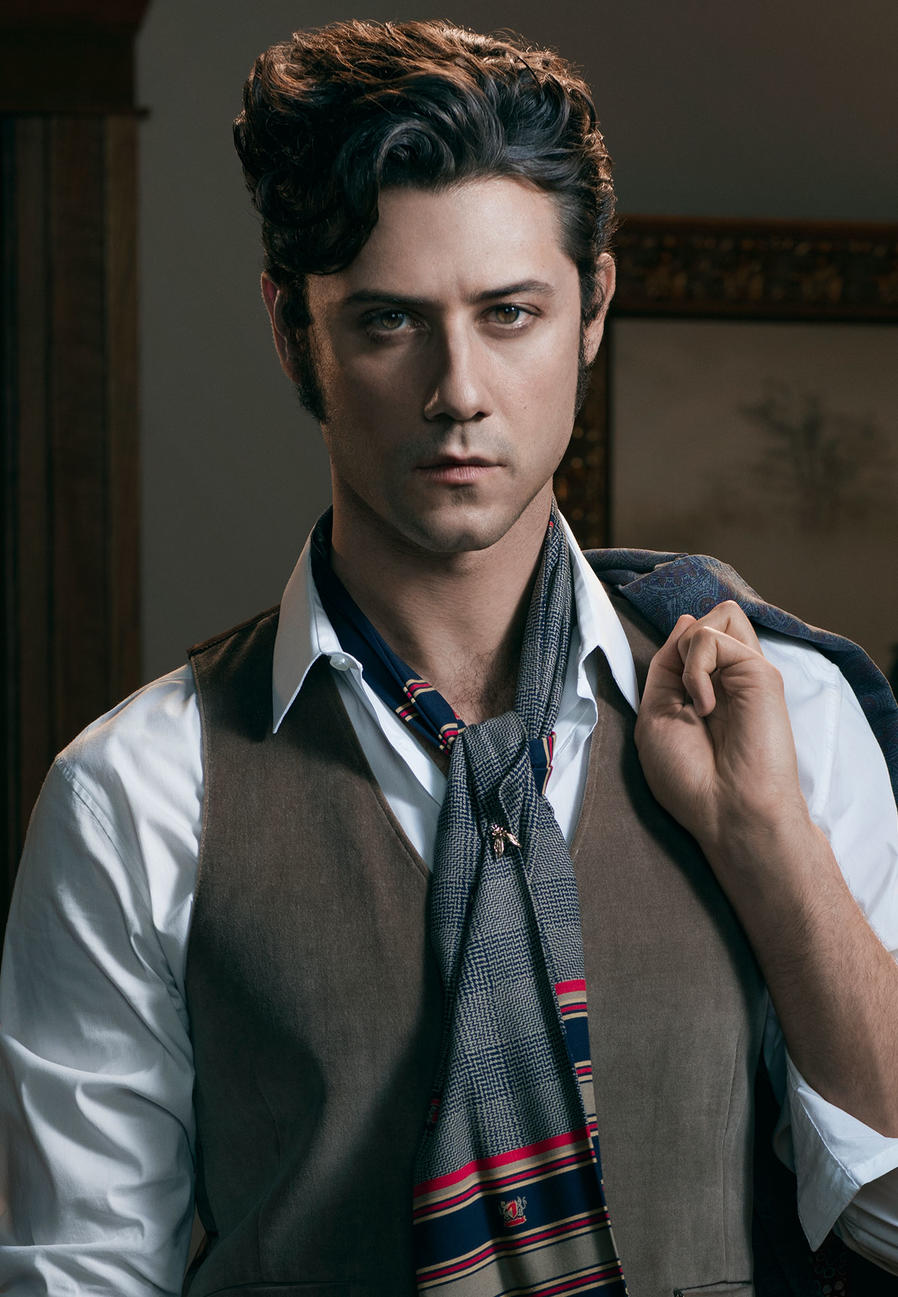