An apartment is empty when you move in so why is it that an empty apartment is such a shock when you move out? It breaks your heart to look at it, or at least it broke my heart to see our old apartment on Tiemann Place in Manhattan’s Morningside Heights after the last box had been moved out. The wife and children had already moved to Brooklyn and so I was the last set of eyes that would see these rooms as home. I looked around. The place seemed diminished the way corpses do. Same blueprint, no spirit. I said a little prayer—or something, I don’t know what it was—of gratitude, gathered up the last bits of detritus, and then I quickly left.

It took a few days of Park Slope living to realize that I would probably never walk those blocks again, past the seemingly omnipresent Haddad’s film trucks—nearly all of Madam Secretary was filmed on Claremont Avenue—and past the ivy-covered walls of Sakura Park as the melodies of Manhattan School of Music students practicing in their apartments spilled onto the street. But more than that, that I would probably never again eat at the handful of restaurants that had kept me and my family fed for the last three years of our lives.

Even the most adventurous or professional eater, I would venture, has a secret cadre of unremarkable restaurants to which he or she returns again and again. Food can’t always be extraordinary, for if it were, the extraordinary would become mundane. But it’s not like I ate at Bettolona, a brick-oven pizzeria a block away from our old house, so often, spending $1,356.52 since 2014 (the last year records from American Express are available), so when I did eat at, say, Marta or Bruno, I had a duff to compare it to.

The pizza is actually good. The regina margherita ($14) isn’t out of this world, but the crust is correct, the tomato sauce has an alluring sweetness and the mozzarella is supple enough. As for the gnocchi ($13), a potato pasta whose moments of delectable levity are counted in seconds, not minutes, that too was the perfect weeknight meal.

More importantly, those two dishes—the regina margherita and the gnocchi—were the only two things my son, Achilles, ate for the first year we arrived. Had Bettolona not been around the corner, I don’t think Achilles would have lasted.

There was a lot to love about the restaurant itself. It has a wall of windows, past which the L ran, a piano covered in old books, a glowing oven and a television above the bar that always seemed to be playing a Torino F.C. game. And then there was Sandro Giusiano, the torinese owner, who spoke Italian to me and tolerated my own butchered Italian back.

But I must confess, most of the pizzas eaten were from a cardboard box and most of the gnocchi devoured from those circular black plastic containers. Some families might be able to go out to eat at the end of the day, but ours was a dinnertime made possible by Seamless. Since February 2014, I spent $3,676.17 on seamless and it would have been more but I began my boycott after the company’s asinine ad campaign. “Cooking is so Jersey.” The only way I read that is as an advertisement for cooking, so go suck eggs, Seamless. I’m a Delivery.com guy now.

Among the standbys, though, Bettolona was the most frequented. We only ate at Chapati House, a fast-casual Indian spot ($1,063.44), a handful of times and never once set foot in El Porton, a run-of-the-mill Mexican restaurant ($323.64). So whereas Sandro knew my boys, from when Achilles could barely walk and Auggie wasn’t yet, the guys from Chapati House remained just friendly acquaintances and the waitresses at El Porton complete strangers.

It wasn’t a reflection on the quality of food. Chapati House, in particular, with its freshly baked roti ($1.25), affordable mango lassis and chicken makhni (11.95), wherein chunks of chicken took on the chipper orange of the spiced tomato cream sauce, and the tumeric-rich Northern Indians specialty, aloo Gobhi Bhaji ($10.95), was especially high-quality. It was simply a function of ease.

By far the closest friends we had in the neighborhood were those at Kuro Kuma ($1,145,28), a tiny coffee shop on La Salle Street, which incidentally doesn’t do Seamless. Nearly every day for the duration of our time uptown, Auggie and Achilles would stop by for a pain au chocolate ($3.25) and an apple pastry thing ($3.25) both brought up from Balthazar. I, myself, spent hours and hours working on two books and thousands of articles, jockeying for position amongst the four tiny tables. I think I was the first customer when it opened in 2012 and watched as Dave and Alex, the co-owners, became fathers and watched as their children grew from beans into beings.

Now that we’re gone, the neighborhood, those relationships and that food seem to be quickly fading. Partially, surely, this is because it’s being supplanted by Thistle Hill Tavern, Couleur Cafe and Hugo, our new neighborhood joints. But mostly I blame Seamless. The flipside of its convenience is isolation, that one loses 90 percent of a restaurant when all ones contact with it is the three-second interaction with a delivery guy on the threshold of one’s home.

Because some day that home will just be an empty apartment and the last load of trash one takes out will be full of empty to-go containers and cheap flimsy unused napkins with no spirit in them at all. 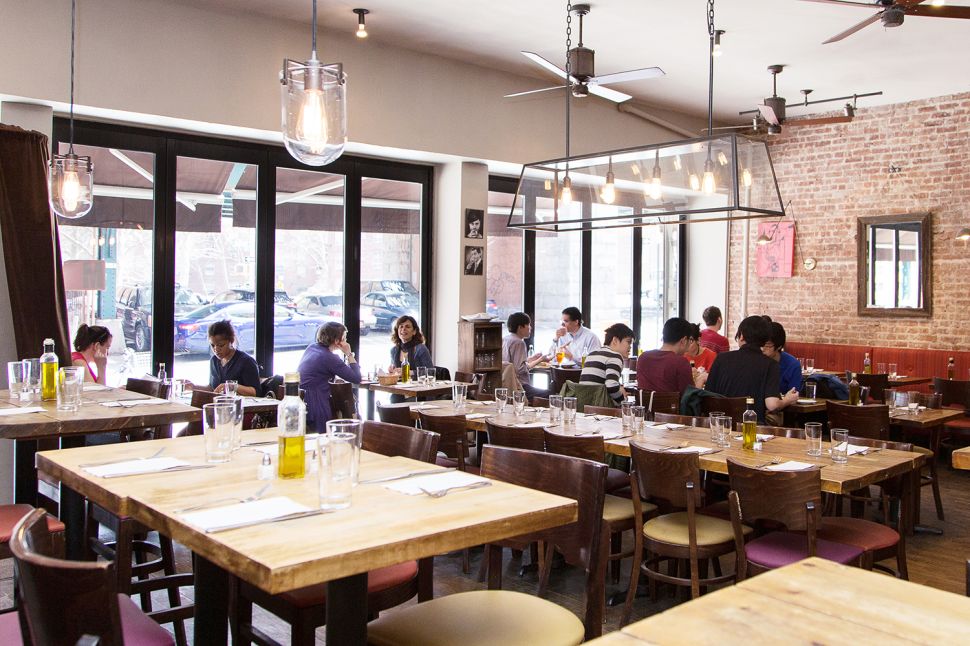