Which native New Yorker does she hate more?

Hillary Clinton took aim at Sen. Bernie Sanders and Donald Trump during a campaign rally in Harlem this afternoon, underscoring just how high the stakes have risen for the Empire State’s April 19th primary. Ms. Clinton, the former secretary of state and senator from New York, is hoping to stamp out Mr. Sanders, the Brooklyn-born Vermont independent, for good on the turf she represented for eight years, and begin to degrade Mr. Trump, the most likely Republican nominee.

Mr. Sanders, Ms. Clinton said to cheers, has ideas that “won’t pass Congress” and leftist plans in which the “numbers” just “don’t add up.”

“My opponent says, well we’re just not thinking big enough,” she said at Harlem’s famed Apollo Theater, the dark blue New York State flag at her back. “Well, this is New York, nobody dreams bigger than we do. But this is a city that likes to get things done and that’s what we want from our president.”

After losing a slate of Western states on Saturday and fighting to fend off Mr. Sanders in advance of Wisconsin’s pivotal April 5 primary, Ms. Clinton still holds a commanding lead in delegates and would have to falter drastically over the next month to lose the Democratic nomination to Mr. Sanders, a self-described democratic socialst with very little establishment support. But Mr. Sanders is well-funded and retains a fervent following and promises to battle on into June, the end of the primary season. Clinton allies would prefer if he dropped out as soon as possible so she could concentrate squarely on Mr. Trump, the incendiary billionaire real estate developer barreling ever closer to the GOP nomination.

Ms. Clinton, tugged in both directions, hedged her bets today. While she’s sounded more like a general election candidate in recent weeks, she also needs to dominate Mr. Sanders in New York to end any lingering doubts about her path to the nomination. She holds large leads in every New York poll taken, and the state’s closed primary should benefit her. Registered Democrats nationwide prefer Ms. Clinton, as do nonwhites, and a growing portion of New York’s Democratic electorate is African-American and Latino. It won’t hurt that virtually every elected official in the state supports her.

Alluding to this fact today, Ms. Clinton again chided Mr. Sanders for not focusing as aggressively on racial disparities as she believes she has done. “I take a backseat to no one when it comes to taking on income inequality. But it’s also important to take on racial inequality and discrimination,” she said.

Ms. Clinton was in Harlem a month ago, where she delivered an address focused specifically on issues of race. Today, it was more about New York, and her record as senator, though she met with retiring Congressman Charles Rangel, a legendary lawmaker in Harlem. Sen. Charles Schumer, a close ally and the next leader of the Senate Democrats, introduced her, extolling her work on behalf of 9/11 victims and her fight against the Bush administration’s attempt to privatize social security. In an indirect jab at Mr. Sanders, who represents rural, gun-friendly Vermont, Mr. Schumer emphasized how aggressively Ms. Clinton, then the first lady, backed sweeping gun control legislation in the 1990s.

“She may not always talk like we Brooklynites talk,” he said, emphasizing his own Brooklyn roots by drawing out the vowel, “but when she speaks out, she changes minds, she changes hearts, she moves to action and she changes outcomes.”

Both Mr. Schumer and Ms. Clinton stressed what’s stake in November: the next president will fill a Supreme Court vacancy, and a big day for Democrats could lead to Senate Majority Leader Schumer and another President Clinton. The Republicans, they insisted, are the common enemy of all progressives, including Sanders backers who may struggle to hold their noses to vote for Ms. Clinton.

“Let’s face it, on the Republican side, what we’re hearing is truly scary,” Ms. Clinton said. “When Donald Trump talks casually about using torture and allowing more countries to get nuclear weapons or Ted Cruz calls for treating American Muslims like criminals … that doesn’t make them sound strong, it makes them sound in over their heads.”

Mr. Trump, a Queens native and Manhattanite, will fail because “love and kindness,” the latest mantra of the Clinton campaign, will prevail, she said.

“Just listen to Donald Trump. He plays coy with white supremacists. He says demeaning and degrading things about women. He wants to round up millions of Latino immigrants and kick them out of the United States, a nation built by immigrants,” Ms. Clinton declared. “It’s cyncial, it’s wrong, it goes against everything New York and America stands for.” 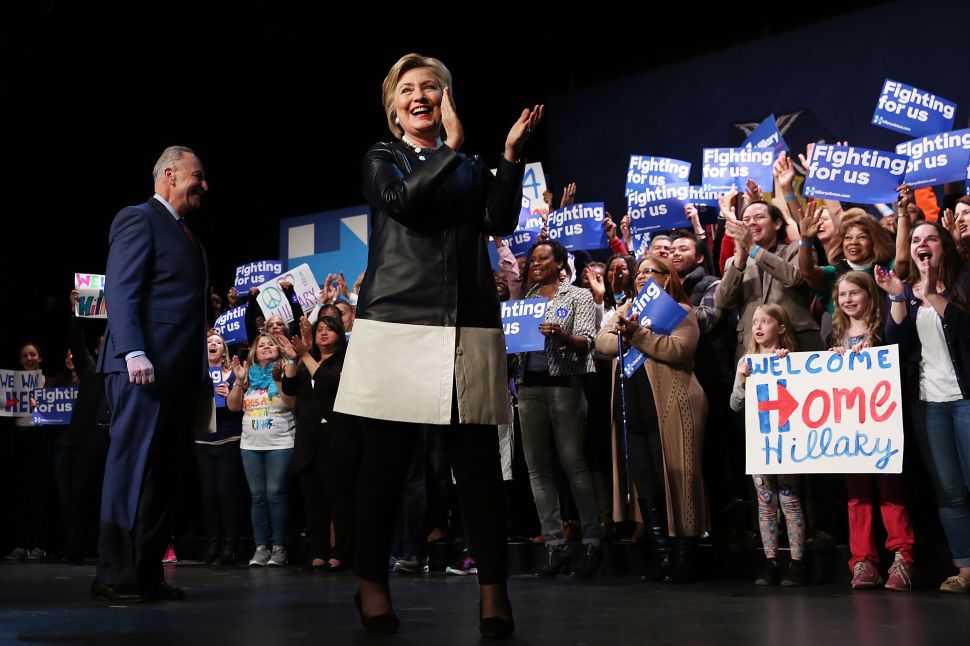