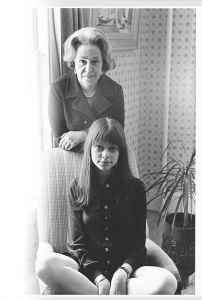 First off, to be clear, I never attended a writing workshop myself, much less an MFA program. But you could say that I grew up in a seven-day-a-week boot camp of writing, from the age of around four. If you’d met my mother (and my sister Rona, did, of course; she is the one other alumna of that highly demanding program and like me, has been well served by the instruction we received there) you’d understand.

Like so many women of her generation—wives and mothers of the 1950s, who’d paid dearly for their education—my mother found herself in a small New Hampshire town, unemployable, for no better reason than because her husband, my father, already had a job. (So why would she need one?)

She dealt with that by selling encyclopedias door to door and tutoring Latin for a dollar an hour, teaching night school at the nearby Air Force Base (where the men adored her, and she adored them) and teaching a couple of English classes at a high school one town over. Eventually, she got herself a job ghostwriting for a famous woman psychologist (which is not the reason why I am named Joyce) and selling articles about child-raising to baby magazines and to the Good Housekeeping magazine series, “My Problem and How I Solved It.” (Later, she published a couple of memoirs herself. But that was after my sister and I were grown, and her work with us—or on us—had been largely completed.)

I have yet to encounter an editor as demanding as the one who sat across from me at the table every afternoon, critiquing my writing and my sister’s.

Her real career—for all the years my sister and I were growing up—was teaching us how to write. And in the four and a half decades I’ve been working full time as a writer (since age 18), I have yet to encounter an editor as demanding as the one who sat across from me at the table every afternoon, critiquing my writing and my sister’s (then typing it for us, marking it some more, and only when it passed her standard, suggesting we submit it to magazines). She also taught me to type, of course. Around age 12. And—because I was interested in creating a newspaper—gave me a used mimeograph machine for my seventh birthday.

If you know a little about my writing career—and if you were born around 1953 and attended some East Coast college in 1972 it is likely you know this part—you might suppose it began when I published that article in The New York Times magazine, “An Eighteen Year Old Looks Back on Life.” But in fact, I’d been publishing stories for a number of years by that point. My first submission: to Humpty Dumpty magazine.

I want to make this clear: I do not recommend my mother’s method as a way of raising children to become writers. The whole thing was pretty stressful, and didn’t leave a lot of space for the kinds of things children should get to be doing in childhood. From the age of six or seven, I started my day with a to-do list. Items on my list: Write a play. Write a poem. Write a story. Write a book. 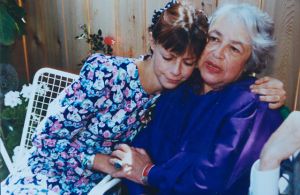 The author with her mother in the late 1980s. (Courtesy of Joyce Maynard).

I definitely didn’t raise my own three children this way. (And they have the snowboarding skills—and the joie de vivre—to prove it. I, on the other hand, never set foot on a ski slope until my mid-30s, though I was raised in the state of New Hampshire. Too busy writing.)

But my mother also gave my sister and me a powerful set of tools, and they have served me well for going on 50 years now, allowing me not simply to earn my living as a writer (a rare enough thing, right there), but most precious, I think, allowing me to tell stories (about real experiences and ones I make up) in a way that has connected me all my life with a precious group of people: readers.

The story of my husband Jim’s diagnosis of pancreatic cancer, which I’ve been chronicling in my writing for the past 16 months, is a pretty good example of what this has meant to me. As brutal as the experience has been, of living through my husband’s illness, it has brought huge comfort (and maybe, I hope, some comfort to others, too) that I have been able to write about it as I have. Telling my stories has allowed me to feel less alone in the world. Not alone at all, in fact.

I thank my mother for that. My mother—who is actually a far more significant character in my memoir, At Home in the World, than the endlessly discussed character of J.D. Salinger.

My mother might not have liked everything I wrote in that memoir, but she would have defended forever my freedom to write it. My mother was the one who taught me how.

I was 35 years old when my mother died, almost 27 years ago. In a handful of years, I will have lived without her longer than I did with her. But she remains the most powerful presence in my life. I feel it when I cook (though less so now that I’m reduced to cooking the very bland and uninspiring diet my husband Jim is able to eat these days) and when I walk through a Mexican market, and when I see a certain kind of bold, confident woman striding down a street, wearing a large and colorful hat.

But most of all, I feel my mother’s presence when I sit down to write. I hear her voice in my ear, reminding me, “Write as if every word cost 50 cents. Don’t take the reader to the bathroom. Read your work out loud. Listen to the sound of the words.” And that’s not the half of it.

And for the last 20 years or so, I have felt my mother’s presence most of all when I teach writing. Because I have no degree, and no official credentials, you won’t find me teaching in a conventional MFA program. So I created my own classroom of writing—in the unlikeliest spot, on the shores of Lake Atitlán, Guatemala, where I host a weeklong writing workshop every February. And, on occasion, in my home in California, where, over the course of one extremely intense day (with a break for an excellent lunch of the sort my mother would have approved), I try to give my little band of students a dose of what my mother took 18 years instilling in me, as a writer. (It is, as I say, an extremely intense 10 hours.) And at other odd and interesting spots on the planet my mother would have enjoyed, as a person of virtually insatiable curiosity about the world and everything it contained (prerequisite for a writer).

I feel my mother’s presence when I sit down to write. I hear her voice in my ear, reminding me, “Write as if every word cost 50 cents. Don’t take the reader to the bathroom. Read your work out loud. Listen to the sound of the words.”

Back to my mother. In June of 1989—having been diagnosed with an inoperable brain tumor, given three months to live—she decided to get married to her longtime partner Sydney. (Her lover, as she would have said it, not being one to mince words.)

The afternoon of the wedding, as my mother made her way through her backyard garden, filled with assembled friends, she stopped many times to call out greetings to many of them.

“Ah, Tony,” she said. “I would have married you if only you hadn’t been gay! And you, Joe,” she went on. “Having another child at your age! What a magnificent accomplishment!”

Did I mention another of my mother’s rules? Use the real words for things. You aren’t writing to please anyone. You are writing to tell the truth. And to celebrate the extraordinary richness of the world you inhabit, however difficult and painful it may be. (But I will add, lest you think less of my mother for this, that neither Joe nor Tony, nor any of the others to whom she tossed off her starkly accurate observations as she passed through the crowd, was the type to take offense at my mother’s observations.)

When I told my mother she had cancer, for instance, and she asked what the doctors were going to do about it, and I told her there was nothing they could do, she just furrowed her brow and meditated on that for a moment.

“My goodness,” she said. (She was 66 years old at the time, and had been having a splendid time of it up until shortly before this.) “Isn’t life interesting.”

Words I live by.

Joyce Maynard’s most recent novel, Under the Influence, was just published. 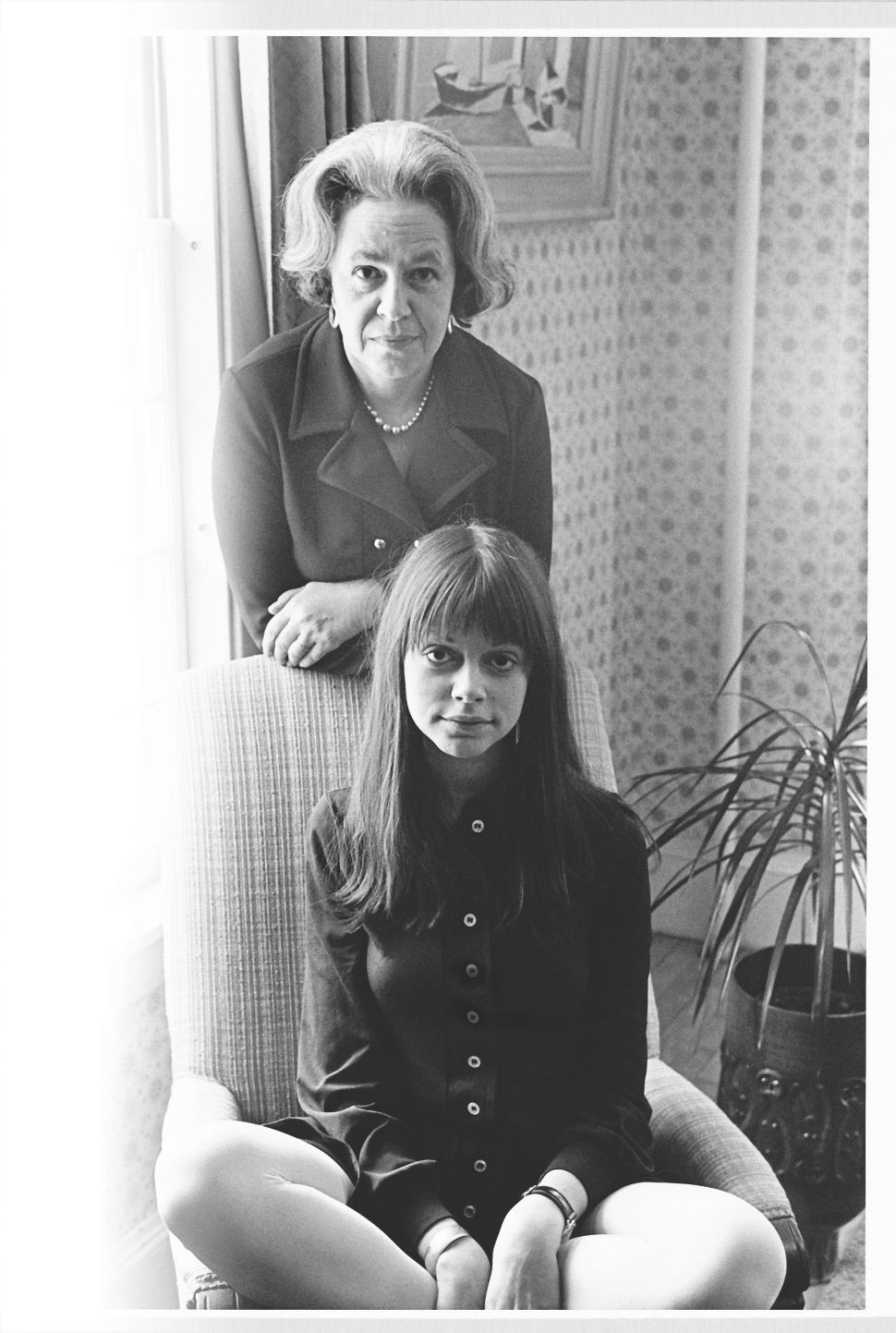