Dating has taken a feverish turn recently. It’s not unusual for the average guy to take a movie title—50 First Dates—and turn it into real life, only now it’s closer to 100. Thanks to the delivery of a date at a moment’s notice using Tinder-inspired apps, New Yorkers are constantly on the hunt for romance, even if it’s only for a single evening. However, on those upwards of 50 dates, the question of who pays is not as cut and dry as egalitarians might like to imagine.

Chris, a self-proclaimed Southern gentleman, was raised in New Orleans and now lives in Hell’s Kitchen. He estimates he went on approximately 75 to 100 first dates in 2015, only going on about 20 second dates and 10 third dates (spending upwards of $10,000). He always pays on first dates, but will accept splitting the check with a female companion on date five, when he considers them to be in a relationship. However, he always wants the woman to offer, even if it entails an awkward wallet reach. “Common courtesy is so underrated in casual dating,” he told the Observer.

*Chris meets women on dating apps Hinge, Bumble and The League, messaging them approximately five times before asking to meet. With his approach, there’s “no need to spend any amount of time thinking about people on the other side of the app.”

The portfolio manager/chronic dater tries to go on dates at least twice a week. “I used do five in five nights, but I got so sick of dating I had to stop,” he said, adding that he has two tricks to guarantee he takes care of the check. His “simple” trick is excusing himself to the restroom and paying while out of sight. “Then you can leave without hassling over the bill,” he said, going on to explain his “fancier” technique, which he describes as “a bit more flashy.”

“For a while last year, I had a favorite bar where I would take all my first dates. I knew all the bartenders there and left them an extra credit card. I could walk out without ever giving them a card, avoiding the uncomfortable check moment entirely. Most of the girls seemed pretty impressed, though a few saw right through it, or thought I had a drinking problem. I had to drop the particular racket when some of the bouncers started making jokes about me having a different girl in the bar every night while a new girl was sitting next to me,” he said, elaborating on his process over drinks (which he paid for).

Ryan, another 20-something portfolio manager estimated he went on a date every other week, adding up to about $5,000 in total last year. The Nolita resident explained, “The check dance makes me feel macho, so I appreciate when my date lets me wave them off. My wallet would prefer we split the bill, but I genuinely enjoy treating someone I’m interested in to a few drinks.” Jared, a 30-something member of their financial friend group, estimated he spent up to $20,000 on dating last year. With app dating, there’s the opportunity to go on a different date every evening, but it adds up quickly.

While all of the men wanted the women to at least offer to split the check, many don’t even think of bringing their wallets. Jennifer, a publicist who described herself as “by no means a feminist” has never offered to pay on a first date; she’ll offer about six months into the relationship. Karla, a consultant who lives in Tribeca, said, “I never offer to pay on the first date. I think the men should be picking up the bill.” When asked if she ever pretends to grab the check, she said, “I have never had to fake anything!” Karla also avoids the feminist label. “Being a feminist is a loaded word, and in a lot of ways the feminist movement has been more detrimental to women than beneficial. Men now can get away with treating women a lot worse because of it.”

‘I understand when a man offers to pay, it’s well-intentioned, but I find it old-fashioned and slightly patronizing.’

On the opposite end of the spectrum is Caroline, a single political staffer who lives in East Williamsburg and insists on paying. The unabashedly self-proclaimed feminist said, “I understand when a man offers to pay, it’s well-intentioned, but I find it old-fashioned and slightly patronizing. If a man does end up paying for one date after refusing my multiple attempts, I’ll make a point to say I’ll pay for the next one…assuming there is a next one.” Explaining her philosophy, she added, “I don’t feel beholden to see a man again if he pays, so I don’t think a man is any more beholden to see me again if I do.” Some self-identified feminists don’t actually want to pay, although they do offer. Crown Heights resident Katie waits until the man grabs the check before offering. “Then, if we’re going Dutch it’s very obvious when he passes me the check after putting down his cash or card.”

Kurt, who lives in Bushwick with his boyfriend, said he doesn’t always offer to pay on a first date, adding, “If you are asking a person out, you are asking to take them out. Paying on the first date sets a precedent—you’ll be paying more often, especially when you’re gay.” Unlike the straight men we talked to, Kurt wants his actions noticed. “Perhaps it is because I am from the South, but if someone doesn’t thank me for paying, it’s an almost immediate deal breaker,” he divulged.

‘If a woman insisted on paying, I would think she was socially awkward.”

Thirty-something Robert described his experiences before meeting his live-in girlfriend. “If a woman insisted on paying, I would think she was socially awkward,” he said. His girlfriend Ella went on many first dates before they coupled up. She shared: “I was set up, and the man ordered an exorbitantly expensive meal and then told the waiter we were splitting the bill equally.” There was no second date.

Ella believes the payment process says a lot about the date. “I don’t mind paying, but it would seem strange if the guy didn’t want to pay on the first date. I would either assume he was weird about money or wasn’t interested,” she explained. Now, two years into her relationship, she and her boyfriend pay for the dates they suggest.

Ken, a recently divorced 40-something, told us he easily spends $2,000 to $3,000 in a month. “The marketplace of dating has changed enormously in 22 years. The rules, mores and expectations have sort of shifted underneath my feet.” Ken prefers cocktails over dinner, but only because of time constraints. “If you sit down with someone and there’s no chemistry, it’s excruciating to have a two-hour dinner with them. I value my time more than whatever the cost differential is.”

Unlike the younger men interviewed, he doesn’t have a suave, stealth check technique, especially since both parties usually have to get home to their children. “If you’re taking a lady out for drinks, it’s not some secret thing it’s time to end the thing.” Asked when he expects the woman to contribute, he responded, “I was married for 19 years and that never happened.”

While he doesn’t mind spending money on dates, he doesn’t want to devote time to a date if there’s no compatibility, so he screens potential mates by telephone call. “I think I’m an acquired taste. If she’s not into me, it’s better to find that out on the phone. If somebody hates the British Office or they tell me they Googled me and they need me to know how much they hate Rudy Giuliani, then I know we’re just not going to end up connecting.”

Dylan, a comedy writer who lives in Astoria, said he doesn’t believe in a subtle approach at the end of the date. While he doesn’t worry about the amount he spends, he does regret paying when the date isn’t successful. Then, he thinks, “I spent $75 to talk at a brick wall. I could’ve ordered Seamless for less, stayed home watching TV and had more fun.”

If Tinder is Seamless for sex, one pays a price for both—it simply depends on what they’re willing to spend and what they expect in return. While gender roles have certainly evolved, splitting the check isn’t as easily or immediately resolved as all the dating apps might lead us to expect. The apps pair people up by a swipe, but they don’t offer advice on who should pay. Maybe more men than are willing to confess are embarrassed to admit they feel perfectly comfortable splitting the bill and more women would secretly prefer a guy to just offer to pay outright. Whatever is going on, wallets are definitely burning. While the dating dance hasn’t changed, when the check comes, the amount has. It turns out 100 first dates is an expensive pursuit, even for New York’s finest finance bros. [*Some names have been changed.] 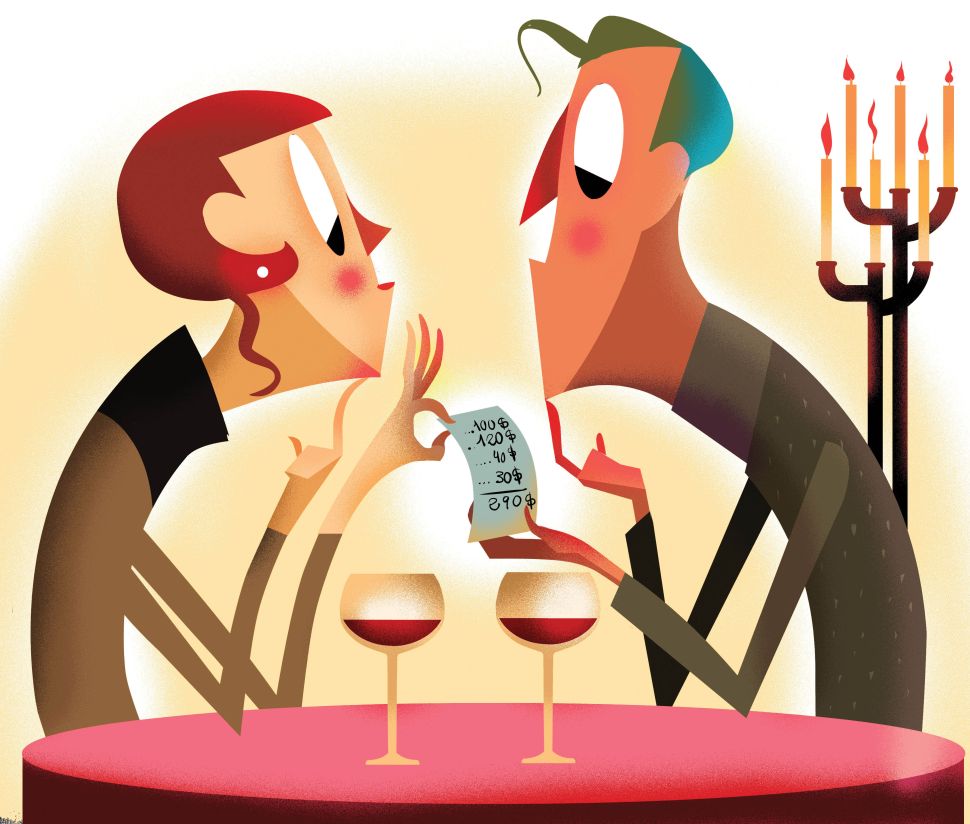