Gainesville, Florida may be best known as the birthplace of Gatorade and home to the Florida Gators, but just as reputable is its McGuire Center for Lepidoptera & Biodiversity in the field of ecology. The center holds one of the world’s most extensive butterfly and moth collections, and manages the life support of one of Florida’s most endangered species: the Schaus Swallowtail.

After flirting with extinction for decades, the Schaus Swallowtail was officially listed as a federal endangered species in 1984. That year, a survey of the population found only 68 butterflies, with extinction imminent unless drastic intervention was made to save the species.

That year, Dr. Emmel and his team began investigating what was causing the rapid disappearance of the Schaus Swallowtails.

“We had some hypotheses of what was causing the problem and one of them was there was a striking correlation between the use of second generation organophosphate pesticide sprays for adult mosquitoes and sharp decline of the butterflies,” he said. By the late 1970s, the Monroe County Mosquito Control District was spraying batex and dibrom pesticides on a regular basis.

“They were spraying batex nearly every night, 3-7 nights a week, and dibrom was being sprayed by planes twice a month. Intuitively, it looked like that was possibly the problem.”

Dr. Emmel and his team received a grant to analyze 8 pesticides being used in the state of Florida to test on Swallowtail butterflies, the closest relative to the Schaus Swallowtail, and common enough in the United States to be considered a pest in some areas. They discovered dibrom and batex were by far the most lethal, and were being sprayed in amounts exponentially greater than what was actually needed to control mosquito populations. The findings provoked US Fish & Wildlife to hold a conference at the University of Florida Law School with all 68 mosquito control districts in Florida, and leading environmental agencies in the state.

“That first day it was pretty clear that a lot of things were being killed in Florida besides the Schaus Swallowtail,” said Dr. Emmel. He also noted one of his graduate students conducted a survey around that time on non-sprayed areas compared with areas sprayed with pesticides, and found 50 percent of the species in the keys were absent in areas sprayed, and around 75-80 percent of the individual insects were gone.  Those trends were then attributed to the decline in the North American Warbler population in the summer, as those migrants from South America stop in the keys without stable insect populations to support them on their +2000-mile flight.

The most concerning data discovered by Dr. Emmel and other researchers were in the State Health Records, which showed Monroe County had the highest rate of neuro-muscular disorders and multiple sclerosis in the United States. To directly correlate those rates to pesticide use, researchers compared the data to agricultural fields in California where batex and dibrom pesticides were being used. The same symptoms were being recorded by migrant workers from Mexico, resulting in several dozen deaths a year. Shortly after, Florida banned the use of batex, and the use of dibrom was restricted. Dr. Emmel added, “this was a fine example of how a butterfly can be a flagship species for the health of the environment.”

Shortly after the conference, Dr. Emmel and his team were granted permission by U.S. Fish and Wildlife. In May 1992, he collected 100 eggs from 8 females in the wild in South Florida to begin a captive breeding program in hopes to repopulate the butterfly’s dwindling numbers. Their timing was fortunate, as Hurricane Andrew made landfall in South Florida a few months later, nearly wiping out the remaining Schaus Swallowtail populations in the wild. Had Dr. Emmel not intervened a few months earlier, the species would likely have gone extinct. They didn’t receive permission to start releasing them until 1995.

“You want to know why it took so long?” asked Dr. Thomas Emmel, Director of the McGuire Center, who led the captive breeding efforts of the Schaus Swallowtail. “Because of all the red tape. Everyone loves endangered species unless they are in their back yard. Then they’re afraid they have to obey a lot of rules and regulations—report every death hit by a car or a lawn mower.”

After appeasing the concerns of Monroe County residents and officials, Mr. Emmel and his team transported 865 pupae on tongue depressors, painted with watercolors to blend in with the butterfly’s host plants. When the researchers returned to see how many had hatched, to their horror, only 80 out of 865 were successful. The rest were torn from the depressor sticks. That April, two big cold fronts halted the northern migration of Warblers in the Florida Keys, leaving thousands of them stranded on the islands with nothing to eat—until they found the Schaus Swallowtail pupae.

The next year, learning from the dangers posed by hatching the pupae in the wild, researchers moved to Butterfly World in Coconut Creek, Florida. There they raised the Schaus Swallowtail, allowing them to mate in captivity before releasing them.

According to Mr. Emmel, 500 to 600 Schaus Swallowtails exist in the wild today, with a goal population of 2,000 to be considered stable by U.S. Fish & Wildlife guidelines.

“The world wouldn’t end if the Schaus Swallowtail disappeared but we might be living in a much worse world today if we hadn’t got the early warning signs from the butterfly,” he said. “See what happens you start with a simple question, ‘What’s killing the butterflies in the wild, why are they disappearing?’ You get into climate change and all kinds of anthropogenic factors. When you start pulling apart the tangled web around the Schaus Swallowtail, all of a sudden you see all of these threads. It was a revelation to people.” 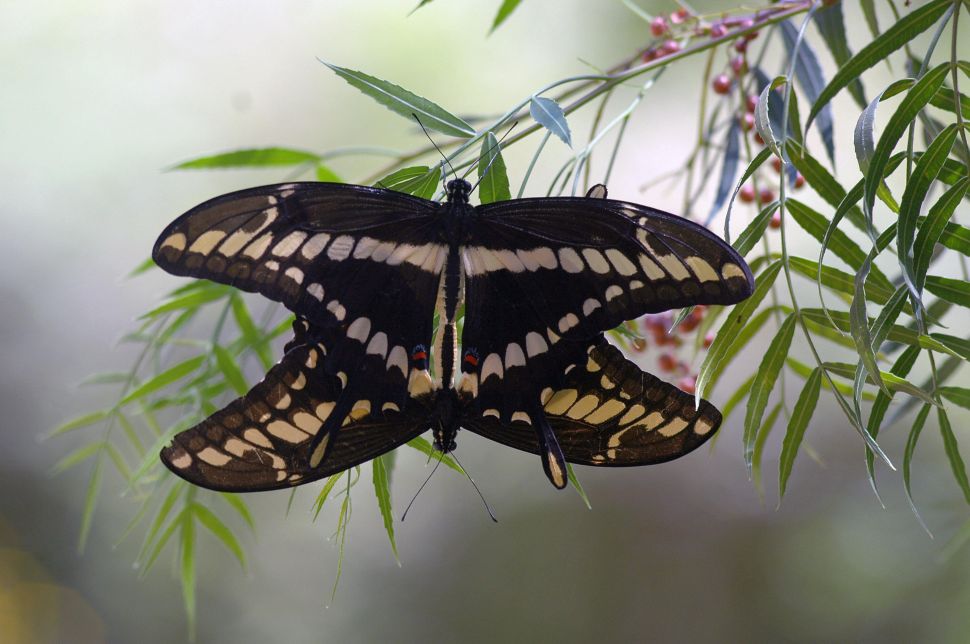