Retired NASA astronaut Ron Garan has dedicated his life to the advancement of space exploration. He’s travelled over 71 million miles and over 2,800 orbits around the Earth while aboard the International Space Station. Along with these accomplishments and flights on the Space Shuttle and Soyuz under his belt, Garan will now be the Chief Pilot for World View, a commercial balloon spaceflight company that will fly passengers to the edge of space to experience the awe of a global, unifying perspective.

Ron Garan is well known for his philosophical take on space travel or what he calls the “Orbital Perspective.” This idea, sometimes called the Overview Effect, was also promoted by late Apollo astronaut Edgar Mitchell and it describes the overwhelming experience of seeing Earth from space and the shift in perspective astronauts undergo while on their missions. “It really gives you the sense that each and every one of us is riding through the universe on the spaceship that we call Earth,” said Garan to the Observer. “It really hit me and gave me deep feelings of not only interconnectedness but of kinship with all of our fellow crew mates on spaceship Earth.”

Garan has spent his post-NASA career writing The Orbital Perspective and teaching an introductory class at Drexel University on the subject. Now, Garan believes World View is the perfect company to help him continue his work and share his experience as an astronaut with the rest of humanity. “The reason why I left NASA was to figuratively transport people to that higher vantage point and now, through World View, I can literally transport people to that vantage point,” said Garan.

According to Garan, more humans observing the Earth from above can eventually affect the trajectory of civilization and lead us to a better future. His hope is that space tourists or “voyagers” as World View calls them, will adopt a long-term perspective and see themselves as part of the bigger picture. “There’s potential to have a very profound transformative experience and transformative effect,” said Garan. “I’m really excited to be with people as they experience that but I’m also excited to see what they do and how that inspires them to make a difference.”

While Garan could not pinpoint an exact moment where his perspective of our world changed, he explains that it was a result of an “epiphany in slow motion” that began during a routine spacewalk above the International Space Station. “I was 100 feet above the space station looking down at this amazing accomplishment of humanity against the backdrop of our indescribable, beautiful planet 250 miles below and that really hit me. What hit me in that moment was the sobering contradiction between the beauty of our planet and the unfortunate realities of life on our planet for a significant portion of the population,” explained Garan. “Looking down on the space station and thinking to myself, if fifteen Nations—some of whom are not the best of friends—could join together, put aside their differences and build, arguably, the most complicated structure ever built in space, imagine what we can do with that same level of cooperation on the ground. The other aspect is having the opportunity to look at the Earth week after week and month after month watching the seasons change and you really get the sense we live on this living, breathing organism. That’s why I call it an epiphany in slow motion.”

Along with the alignment of vision and philosophy between World View and Ron Garan, comes the need to push the aerospace industry towards a more frequent, sustainable and innovative future. “This is something that has never been done before so it’s going to be revolutionary,” said Garan. “It’s going to create an industry that doesn’t exist right now. The high-altitude industry is not only for people flying to space but to enable communication platforms. Everything that can be done through the satellite industry can be done with high-altitude balloons.”

World View currently operates as a platform for scientific research, weather forecasting and education via an “unprecedented” amount of flights to the stratosphere. Using their balloon technology to hover over a fixed location for months, World View helps to facilitate a wide range of study that includes astronomy, climate modeling, atmospheric science, early forest fire detection and remote sensing – all done under the company’s robotic flight operations.

Along with assisting on unmanned robotic flights, Garan will help World View jumpstart high-altitude space tourism where civilians can depart from a spaceport in Tuscon, Arizona to a distance of about 100,000 ft using a helium balloon. For a price of $75,000, World View’s “voyagers” will see the curvature of Earth against the blackness of space and hopefully experience the intended paradigm shift during their journey.

While companies like Blue Origin and Virgin Galactic have similar plans for breaking into the new space tourism industry, World View’s operation will be different so they can accommodate the experience of the Orbital Perspective. Those companies will send their spacecraft to a far greater distance—over 300,000 feet—but for a much shorter trip than World View currently proposes. “Part of the power of this transformative experience has to do with the variable of time,” explained Garan. “How much time do you have to process the experience? Our voyagers will have a few hours to process the experience which I think will be good. The more you have the better it is.”

Because World View is using a balloon rather than a rocket, passengers will be spared the extreme G forces usually associated with space travel and have a smooth ride on their way to the edge of space—a factor that also enables the safe transport of sensitive scientific instruments. “Voyagers” will travel at about 1,000 ft per minute until reaching their destination where the sky around them will turn from blue to black.

The capsule itself is still in development but it’s being designed as a tourist-friendly spacecraft that includes a bathroom, perishable goods facilities, and of course, giant windows. World View is also planning to install internet access so passengers can share their experience with friends and family back on Earth. Once the stay is over and Garan is ready to bring his passengers home, the capsule will detach from the balloons and be guided back to the surface with a steerable parachute. The company could begin tourism flights as early as 2017. 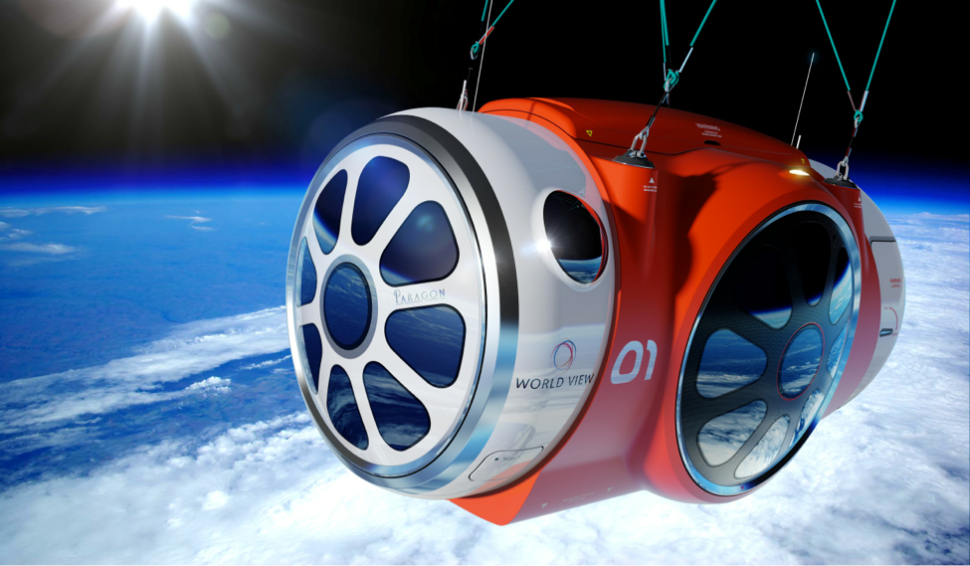