All I’m going to say is: buckle your seatbelts, because this episode of How to Get Away with Murder was insane. Tonight’s episode starts with Wes talking to the therapist that put him in the psych ward and Laurel interrogating Annalise as to whether or not Wes killed his mother. We go back ten years in time, to Wes and his mother playing cards, when three ICE agents knock on the door. Wes’ mother is taken away. We next see her in an interrogation room with Annalise’s former partner and lover. The plot thickens. Back at headquarters, aka Annalise’s living room, the team is discussing what to do about this Philip issue. He’s sent another video, this time of Michaela and Caleb kissing. Everyone’s reasonably freaked out and their worrying cries have reached fever pitch. Annalise decides she’s had enough and demands the laptop from Connor. She takes it to the assistant district attorney’s office and tells him Philip is back in town, and she has the evidence on the laptop. The caveat is that she demands immunity for her and her team with regards to the night the district attorney’s death. Instead, behind her back, he orders a search warrant. Luckily, Nate is made aware of this and tips her off. “They’re playing you, Annalise,” he says. Very DJ Khaled of him. Major key. What happens next is nothing short of incredible.

Annalise, while on the phone with Bonnie, orders her and the team to shred the files before the police come. The ADA reminds her that tampering with evidence prior to the valid execution of a search warrant is a felony. Where is this going?? What the hell is she doing?? Frank tells Michaela to look up which judge is on call for emergency warrants that day. She tells him. He tells her to look up who the judge has for a clerk that day. Connor calls the police, impersonates the clerk, and gives the “okay” to proceed with the warrant. Shortly after, the police arrive. Bonnie calls someone to announce that the premises are being searched illegally. “The judge never signed the warrant?” she asks with an air of mock surprise and a twinkle in her eye. Unbelievable. Stuff like this is exactly why I love this show. Annalise is an absolute mastermind: “Either I sue your ass for abuse of power, or you grant me immunity, and find the evidence you want on that computer.” She says to the ADA. Wow.

Throughout the episode, we go back in time to pregnant Annalise. She’s clearly involved in something nefarious related to Wes’ mother. We just don’t know the full extent yet. Presently, Laurel is at Wes’ urging him to go to Annalise’s with her and that he isn’t safe where he is with Crazed Killer Philip on the loose. He says he’s not safe anywhere and orders her gone. Laurel heads to Annalise’s to Asher opening the door in a dragon costume and offering her “pizza bites.” The gang’s mostly all there: Connor, Oliver, Michaela, Laurel, and Asher. Frank and Bonnie are out at a bar together, slamming shots. “To the end,” Bonnie says as they clink glasses, referencing possibilities that a) Philip may kill them all or b) that they may all get arrested after all.

Flashback time. Annalise and Eve are having a fight, when Eve says she needs to go talk to Rose, Wes’ mom. They’re back in the interrogation room, and Rose is saying she knows she’s being threatened with deportation or worse on Annalise’s behalf. Rose agrees to testify, and is released from custody to a young, sad, scared, confused Wes. Present-day Wes is in his apartment digging further into the case involving his mother. He heads to Annalise’s and lets himself in. Cut to Annalise in Nate’s bed, smiling. I would be grinning my ass off if that’s who I got to see naked, too. Wes begins rifling through Annalise’s things on her desk, and comes across the paper Laurel found that named child Wes as a potential suspect in the death of his own mother. We again see him as a child, holding a bloody knife with his mother gasping for air on the ground. Is this real?

Annalise is back with the assistant district attorney, who know is asking questions about the night the D.A. was murdered. “You should be a writer,” she spits at him, “you’re good at making up stories.” She leaves, heads to her house, and tells the team (minus Wes, Bonnie, and Frank) that they all have immunity regarding the death of the D.A., but stresses how important it is that no one talks to anyone outside of their circle about this. Wes is at his therapist’s with the piece of paper that names him as a suspect in his mom’s death. He insists he remembers standing over her with the knife. She says it could be a “false memory” created by him as a way of coping with the trauma and trying to make sense of it all. Wes is telling his therapist that he believes it’s possible that he actually did do it and that someone covered it up for him. Naturally, his therapist thinks that’s impossible.

Laurel’s in Annalise’s office, confronting her about her indifference towards Wes. Through tears she says, “I know what you and Frank do to people.” Annalise implores her to say exactly what she means by that. Laurel refuses and simply says before leaving the room (about Wes,) “it’s not on me anymore. It’s on you.” Wes is in the therapist’s office while it cuts back and forth with scenes of the day his mom died. She packed them and their belongings into her car, and was fleeing, when Wes jumped out of the car. We see child Wes running into his apartment while his mom lies there bleeding, the knife still in her neck. We then see pregnant Annalise (!!!) frantically running away from the apartment.

Laurel and Frank are now in Annalise’s basement, and Laurel is ending things with him. She can’t handle that he killed an innocent girl. The camera pans away from them and onto a shelf, where we see some sort of recording device, recording audio of their conversation. We also see an identical device on a desk, transmitting what’s being said to Bonnie. In a flashback, we see that Annalise has been made aware that Rose has tried to leave the vicinity, but is back at her apartment. Annalise goes there, and a verbal altercation takes place. Rose insists that Annalise “doesn’t know what [Charles Mahoney] is capable of.” She seems increasingly desperate, and ultimately stabs herself in her own neck. Obviously shocked and shaken, Annalise dials 911, but doesn’t send the call through. Instead, bizarrely, she flees the scene. Young Wes finds his dying mother, pulls the knife from her neck and stands over her. He dials 911, and says, as his mother gasps on the floor, “something bad happened.”

Back in present day, Annalise heads to Wes’ apartment. She knocks, no one answers. She slides a note under the door, and sees the shadow of a body. She eventually lets herself in. As she heads for his bedroom door, Eve calls. She tells Annalise that Wes is there with her and he found her name on his mother’s immigration documents and wants to know what’s going on. “Call 911. There’s someone in Wes’ apartment!!!” Annalise exclaims to Eve. Philip emerges from the shadows, and tackles Annalise. The episode ends. Oh. My. GOD. Next Thursday suddenly feels ridiculously far away. 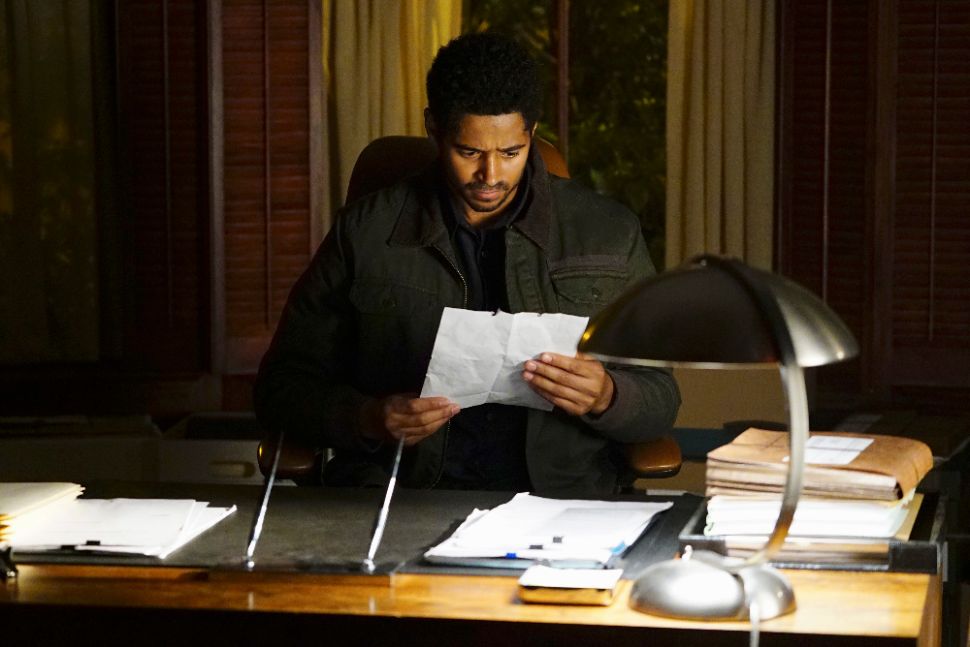