ST. PETERSBURG, FL—In a mumbling video deposition, former Gawker editor AJ Daulerio was asked if there was any situation where he would deem a celebrity sex tape not newsworthy.

“If they were a child,” Mr. Daulerio responded.

“Under what age?” Mr. Daulerio was asked.

“Four,” he said in a reply that could be either be interpreted as facetious or serious, depending on the audience.

With that, the video deposition ended, to silence.

Mr. Daulerio’s deposition was shown this morning during Hulk Hogan’s trial against Gawker. Mr. Hogan, who goes by his real name Terry Bollea in court, is suing the website Gawker for $100 million over a 2012 post that showed edited excerpts of Mr. Hogan having sex with the former wife of his now former friend, local radio shock jock Bubba the Love Sponge Clem.

Mr. Daulerio, who has been sitting next to Gawker Media owner and CEO Nick Denton since the trial began on Monday, was the site’s editor when the tape was published, and the author of the post. The former Gawker editor was named as a plaintiff in the civil suit.

Mr. Hogan’s lawsuit alleges that posting the video, which was filmed without his knowledge, represented an invasion of privacy. During his testimony, the former wrestler and reality show star repeatedly tried to draw a distinction between Hulk Hogan the character and Terry Bollea the man. Gawker argues that this is a First Amendment case, and that the site was justified in posting the video because Mr. Hogan had previously discussed the tape and his sex life, making it newsworthy.

Earlier in Mr. Daulerio’s deposition, he was asked to explain what makes a subject newsworthy and about various other tawdry posts that the site had published in the past, as well as topics such as when posts are labeled “NSFW” or “not safe for work.” He was also grilled about a Gawker retreat in Budapest, the difference between pageviews and unique visitors and why he didn’t take a job at Animal New York.

Taped depositions from other Gawker editors were played yesterday, during which the Florida jury got a crash course in the inner workings of the company—and the media.

Both Emma Carmichael, who is now the editor of Jezebel but was Gawker’s managing editor when the sex tape was posted, and John Cook, Gawker Media’s current executive editor, were asked to explain inside jokes they wrote four years ago on the chat service Campfire about the Hogan post—although they were the kind of media jokes that were at best slightly humorous but mostly convoluted in 2012. In the retelling, they sounded positively incomprehensible and insidery.

At one point, Mr. Cook was asked about a comment he wrote that said “wtf is the daily caller” with a link to story from that site. Another question forced him to explain why he had posted a photo of an uncircumcised penis that he found on Andrew Sullivan’s blog.

Ms. Carmichael, who, it was established, was in her early twenties when she served as Gawker’s managing editor, was asked why she had posted an end of year round up of Gawker’s most popular stories from 2012. As anyone who works in media knows, and anyone who does not has probably never given any thought to, annual year-end round ups serve as easy, pre-planned posts for the holidays, when traffic is slow and the office is mostly empty.

In establishing their work history during their testimony, Mr. Cook and Ms. Carmichael, both of whom left and returned to Gawker at points during their careers, named outlets mostly unfamiliar to Mr. Hogan’s lawyer, and, likely, to the Florida jury such as The Intercept, The Awl and The Hairpin.

“How do you spell The Awl?” Mr. Hogan’s lawyer, Shane Vogt, asked Ms. Carmichael. “And what is The Hair Spin?” 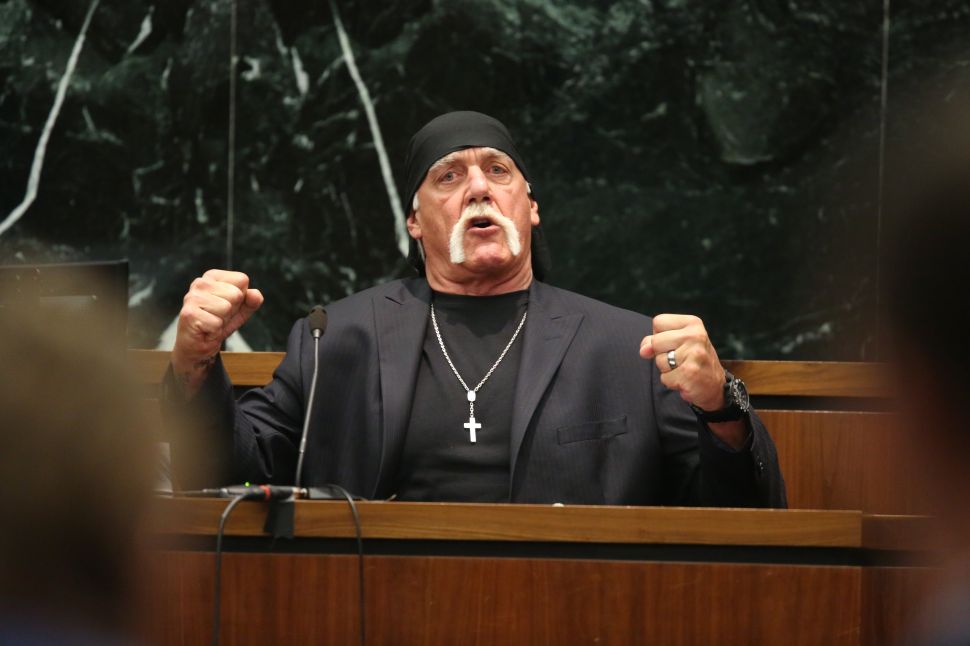