This has been one of those weeks when the conflicts between celebrity and the dynamic tension of publicity and privacy are being laid bare in the Hulk Hogan (Terry Bollea) v. Gawker trial down in Florida. Like any decent Real Housewives episode, the setups are so improbable that it seems remarkably unlikely that the case was not scripted well in advance.

Mr. Hogan plays multifaceted roles of wrinkly rogue, having been videoed in the act with his now ex-best friend’s wife—a faded star who still craves the limelight and a righteously indignant person who is offended by having his intimate moments exposed. The legal voyeur cannot avoid being struck by an overwhelming sense of pathos when hearing a man, struggling to maintain relevance, who has been marinated in his character for so long that he speaks of his alter ego as an old friend.

Putting aside for a moment, the lawyer-inflated $100-million dollar damage demand and the fact that that names like “DJ Bubba The Love Sponge” actually exist, this case, more by default, is airing critically important issues that affect those who are enriched by their fame or notoriety. Privacy concerns originally thrown up by reality TV have become a little obsolete as, previously, there was a more definite public-private line drawn when the cameras were turned off. Now many wannabe and actual celebrities continue documenting every step of their lives—outside of filming—from pictures of their meals through to gym routines.

Gawker’s former editor A.J. Daulerio, masquerading as a First Amendment crusader, subscribes to the website’s philosophy of those who live by the sword, should die by the sword. Differently put, when it comes to celebrities, their lives, their children, their darkest moments of grief or vice, are open season all year round. Gawker’s path to victory is to appeal to one of the core principles of the Constitution, namely free speech and the blanket defense enjoyed by the press. Gawker knows that the deep emotional attachment to the First Amendment is really its only weapon to offset in the mind of the jury what is, ostensibly, a gross invasion of privacy.

The analysis breaks down into three central questions which are all interrelated: whether Gawker is a member of the press, the story is newsworthy and if Mr. Hogan has lost his claim to a private life. On a higher level, is the issue of journalistic integrity in the modern age of web-newscasting or cyber-journalism is being litigated. In days of yore—or 20 years ago—the vast majority of journalists underwent rigorous academic or on-the-job training but, most importantly, were ruled by editors, who craved the credibility to set the news agenda.

In the current era, news is broken by hashtag and anybody with a cell phone or wifi access who lays claim to be a blogger. In short, thanks to the ease and speed of being able to upload a newly-acquired sex tape, snap decisions of newsworthiness are made by those who have not been trained to exercise an editorial filter. That Mr. Daulerio’s compass is improperly calibrated can be adjudged from his 2013 deposition in which he states that he would only draw the privacy line in publishing intimate images of a child. Mr. Daulerio’s definition was then further refined as a child under four years of age, underlining the desperately needed revisions to the law highlighted last week. No wonder celebrity mothers like Jennifer Garner and Halle Berry have been pushing for legislative change to modify the laws of harassment when it comes to their children.

Rather than championing freedom of the press and First Amendment rights, Gawker is steadily demonstrating that not everybody claiming to be a journalist should be afforded such a privilege as a matter of law. If one is shown to be patently unfit in exercising correct judgment as to newsworthiness, the reasonable mind might think that one who invades privacy by the pen might have to use it to sign a couple of checks.

See our coverage of the trial here:

Hulk Hogan Faces Off With Gawker Attorneys in Florida 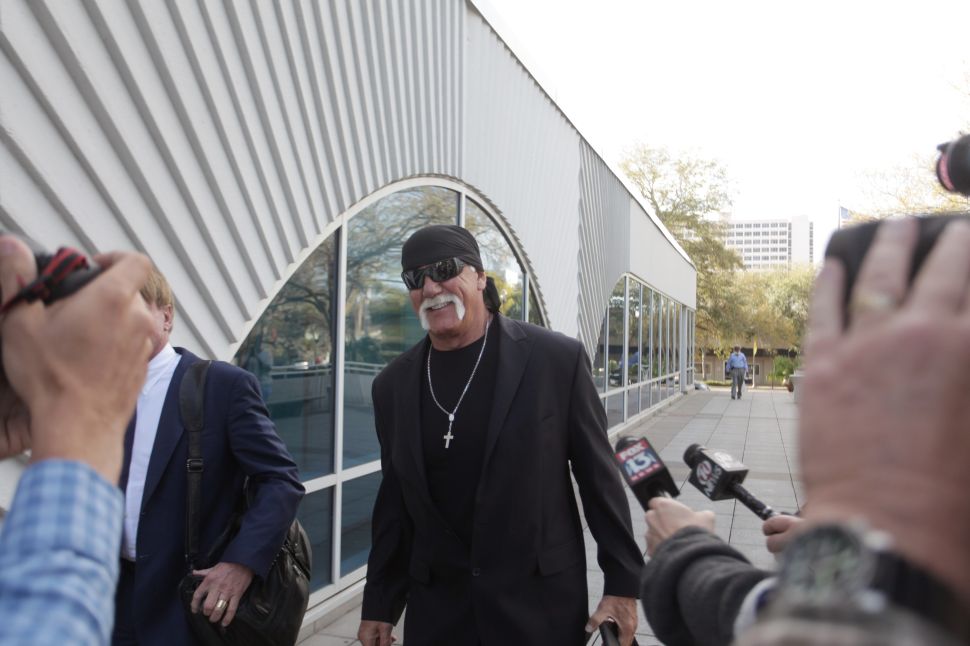