One thing you’ll miss right away when you leave Chicago for New York is your shelf space. Great big built-in racks in every closet. A big built-in in the dining area for holding dishes (but really board games). Book shelves in every room. But the one thing I didn’t miss was the marauding band of ex-English majors (or whoever they were) who robbed my home in 2004 and stole my books.

I’ve been thinking about those fellas a lot this year as I embarked on a personal mission to read only the books on my own shelves. Until February 1, I, an author and occupant of a skinny duplex, sought to end the conflict in my life between my love of books and natural constraints of living in New York.

When the robbery first happens—because you have no choice—you try to imagine your new weightless life. Especially because it happened right around the time I graduated college it reminded me of my breakup with Amanda. Sure, by senior year I don’t think I loved her as much as I’d once had. But, like Freud and most of Junior year’s post-modernism texts, we had just spent so much time together that it felt weird not to have them around anymore. Even if they just annoyed me.

Bookshelves are always just notches on the belt. But rereading a book is like having a romp with an old flame. Sure, you’ve been to bed together before, maybe even gone on a vacation, but secretly you were just using them to get over someone else. It was good while it lasted, but only because it didn’t go on too long. Why not just leave it alone?

I did, however, love having grownup bookshelves from then on when I moved to New York. No big college USED stickers, no impressive books I’d never finished. And certainly no IKEA particle board shelves. At my new apartment in Brooklyn, I spent the next 10 years building custom shelving into old chimneys, fireplaces. So last February, in honor of all the nights I’d stayed up reading and all the breakups I’d overcome while planing down these shelves: I decided to just read books I already owned for one year.

In the average year I read 52 books.  As an author, however, many more are given to me in the form of slapdash “Advanced Reader Copies” with their stern NOT FOR RESALE on the cover. Hastily made and usually (embarrassingly in my case) willfully full of spelling errors, ARCs are the fruit-salad of the publishing world—people are forever bringing them to parties, getting drunk for free and then leaving them behind, untouched by all, only to be thrown away later by the host.

If literature is my first love, then I’ll just add that all the attendant features of literary life—going to book parties, finding something polite to say in blurbs, going to bed early and even building these heavy shelves—are just the bullshit things you put up with when you’re in a relationship.

Surely, Hemingway’s Moveable Feast gets better everytime. But when no one is looking I must say, Shakespeare’s Romeo & Juliet is a delight, especially when no teacher or Hollywood director is ruining it for you. Zadie Smith oftens says she cannot bear to read her early work anymore and I must say that when you read White Teeth—with all of its high school yearbook epigrams and asides and font-based jokes—there’s no reason you couldn’t just go for On Beauty.

It still delights me that I, a mediocre student, can almost feel the good parts of a book coming back at you. The line that made my day when I was 22 is still there, on that page, where I saw it. And in the moments leading up to it I can envision the bottom right corner of the page, still there, just where I left it in 2005. Try doing that on a Nook.

Then there are the books that you can grow into. You don’t have to read my book about being a heartbroken music fan to assume I loved Nick Hornby’s High Fidelity. But in About a Boy I felt the time travel of having been 12 years old in the 1994 of the book like the main character Marcus. When I read it in 2002, I was weary of Will, the single man in his thirties (Hugh Grant in the movie version). Only now I’ve aged into the Will character and find him much more relatable. But still not quite heroic.

Tucked into that copy of ‘Slaughterhouse Five’ is a ticket stub to Belize and that girl you never really saw again.

You couldn’t pay me to be 22 again. But mixed in the pages of this Hornby book, though, I found a pay stub from my first job in New York where they clearly did not (40 hrs= $383). There on a napkin next to my pitiful paycheck I had written, “Esquire summer fiction internship.” And then the mathematics as to how I angled to get Editor at Large A.J. Jacob’s telephone extension in 2005. It’s 2016 and I’ve been writing for Esquire since 2010. And now when I’m reading Jacobs and Hornby, and I want to shake the page and say, “Yes! Yes you really get what this is about!” I can just send them a FB message.

When you pull reading away from its too-precious realm (communicating with your literary forbearers!) and take it down to what it really is (what you do between the seatbelt demo and when you can pull out your laptop inflight) it actually becomes closer to your heart. Tucked into that copy of Slaughterhouse Five is a ticket stub to Belize and that girl you never really saw again. My only way to remember my state of mind at the time (when I was, no doubt, blowing it) is to reread the entire book and think about how different it looks to me now in my thirties.

My eyes linger often on the literary superstars of the mid-2000s. They had once seemed so promising, like seeing Philip Roth’s first band at a bar in college. There’s the hardcover of Esquire Fiction editor Adrian Miller’s The Coast of Akron or n+1 founder Keith Gessen’s All the Sad Young Literary Men. Co-founder Benjamin Kunkel’s debut Indecision was everywhere when it came out—complete with a cover-page review by Jay McInerney in The New York Times—but now I can’t seem to find my copy. It was huge at the time, but when is anyone going to want a used copy of Bob Woodward’s rushed-to-press hardcover The Secret Man: the Story of Watergate’s Deepthroat? These were must reads when they came out, but, as with most matters of infatuation: enough time passes and you find you can live without them.

In love, as in book publicity, most of us are just guessing.

So why do we keep them around? Moby Dick and Leaves of Grass are in the following category: After your first reading you can start anytime, any page, any paragraph. As weird as that sounds. Tobias Wolfe’s This Boy’s Life doesn’t care if you have to get up in the morning. There is no greater chronicle of the 20th century than Langston Hughes’ I Wonder as I Wander. But then again, The Right Stuff lives up to its name.

It’s always good to prune the shelves. Donate them to Housingworks. Not every book deserves a space in your life. Some of us who have trouble throwing out an ex’s shampoo from a rack in the shower aren’t going to do any better getting rid of Maureen Dowd’s dud from 2005 Are Men Necessary?. In the years since that initial heartbreak: Amanda and I didn’t get back together. But, also, I still never finished Don Quixote.

I could say—without question!—right now that after this year I will probably never pick up all but five of these. That’s about 515 volumes that should go to a used book store. Even that might be too much to ask. They’re not doing the world any favors in my apartment. But still I don’t want to let them go.

Years after the Chicago incident my best friend Ben revisited our old neighborhood in Wicker Park. He dropped by the local used bookshops looking to see if he could find anything from my college James Joyce seminar. He didn’t. But, on the plane ride home, he found this note in what he thought was a new copy of Jitterbug Perfume by Tom Robbins.

I have not been at my most marvelous of late. It’s clear that some of my actions have caused you pain. This was not intentional, but only the way things turned out. I am sorry. I need you, and you must realize this because you continue to be about at the right moments. You are a good friend.

P.S. If I ever find this copy of this book in a used book store I will never speak to you again.​ 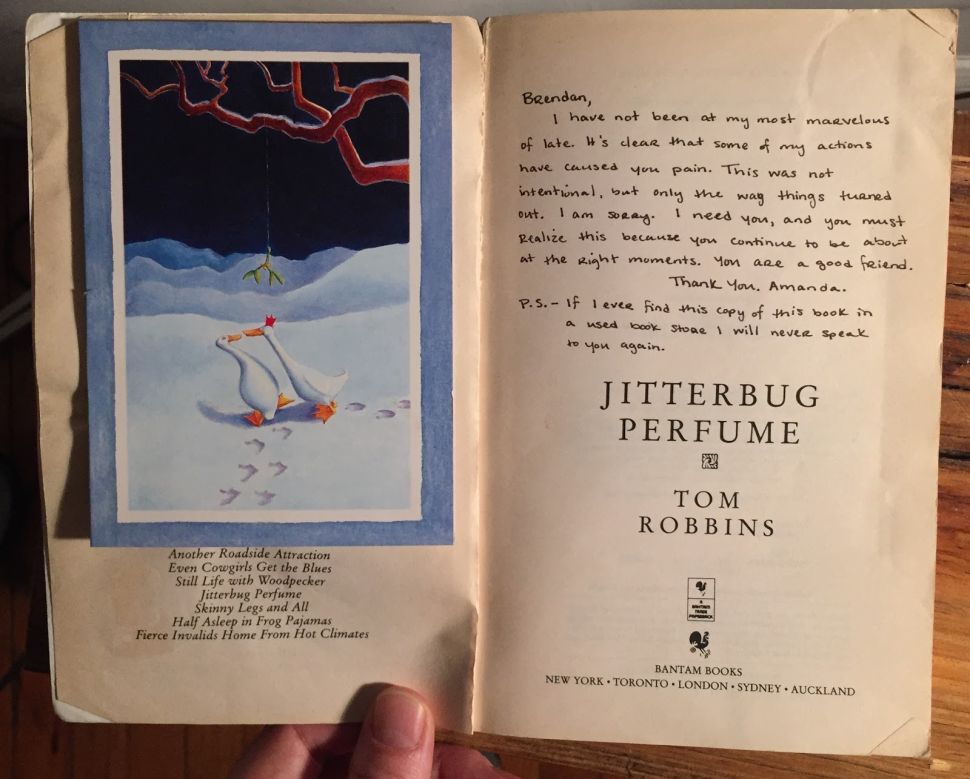