Game of Thrones‘ sixth season doesn’t debut for another month, 10 days, seven hours and 55 minutes, but HBO already started the frenzy–first with a trailer, then with the slimmest possibility that said trailer offers a glimpse of the reincarnated and perfectly conditioned hair of Jon Snow. We should be excited, right?

“You say the slightest thing and the internet goes ape,” [Ian McShane] says. “I was accused of giving the plot away, but I just think get a fucking life. It’s only tits and dragons.”

Now that I assume a friend or family member has awoken you with smelling salts, we should talk about this quote a little bit. Because of course Game of Thrones is more than “tits and dragons,” especially in these later seasons after the show became an established ratings killer. Just in season five alone we dealt with fratricide, the dangers of organized religion, rape, and the issues posed by armies of the undead. Plus, no tits OR dragons played any part in the shank heard ’round the world.

But, conversely, no matter how bluntly stated Mr. McShane kinnnnnnda has a point? I mean, it’s at least worth having a debate over. Which I will do, right now.

IS Game of Thrones JUST tits and dragons?

ARGUMENT FOR: There are a lot of “tits.”

A study from early 2015 found that across the first four seasons, 31 out of 40 episodes of Game of Thrones contained nudity, with a Wall-sized gap between the prevalence of female nudity and male nudity. Using the first two seasons as a basis, 9Gag found the series averages about 5.6 “boobs” per episode, which is damn near a boob a minute.

ARGUMENT AGAINST: But there isn’t THAT many dragons.

Technically, there’s only three dragons in the whole darn thing, but they are a pretty big deal seeing how A) They are the only dragons in existence and B) Probably cost HBO the budget of 3 Togetherness episodes combined to appear for 30 seconds on screen. The most prevalent dragon, Drogon, has only physically appeared 14 times in fifty episodes.

That’s not that many dragons, Mr. McShane. That’s like, at best, many tits and a couple dragons.

ARGUMENT AGAINST: Spoilers are bad!

Spoilers ARE bad! Kind of. I mean we’re pretty much living in a world with 6,000 different TV options just on Sunday night, and unless you have infinite time and/or eyeballs you’re going to miss something. And THEN, unless you have the luxury of living in a titanium-enforced spoiler cave, some plot point or another is likely to reach your brain and/or singular set of eyeballs. It happens, and we move on.

But, I can understand we’re all a little touchy, especially when it comes to Game of Thrones. As someone who has read the books (I know, I know, send fan adoration to the email above), I understand the mixture of terror and elation at the thought of leaving my sweet, warm Ice-and-Fire-y safety net for book-less season six. Like a baby bird leaving the nest for the first time, only the nest is a 20-year-old fantasy series and the mamma bird is this 67-year-old man who dresses like a steamboat captain 24/7.

I want to be surprised! And Game of Thrones–both book and show–operates 90% on the back of shocking surprises.

ARGUMENT FOR: But Ian McShane didn’t outright spoil anything.

For all the hullabaloo over Mr. McShane, spoiler-monster, it’s not actually like he said “I’ll be playing [this character] and I bring back [this character], fuck you all I was in the fourth Pirates of the Caribbean.” What he DID say was this:

“So I have this group of peaceful, sort of like a cult, a peaceful tribe. I bring back a much loved character everybody thinks is dead.”

Got that? No? Let me break that down: Mr. McShane didn’t confirm his character by name, but he did basically confirm a popular fan theory (if you are unaware but want to know that badly, here ya go). Basically, some people concocted a theory as to where Game of Thrones‘ story was headed, and then were pissed when they nailed it.

ARGUMENT BOTH FOR AND AGAINST: Maybe we should all just calm down.

Am I telling you to “get a fucking life?” No. No, no, no, I would never tell any passionate fan-base of anything they’re wrong. I mean, look at the insane things Game of Thrones has driven me to in the past. But is this all “tits and dragons?”

At the end of the day, TV is TV. Books are books. And I feel, somewhere between someone coining “Golden Age of TV” and Jon Landgraf telling us there’s “too much,” we all forgot that while TV can be art, it mostly exists to entertain. The moment we put any art form on a pedestal is the moment we ruin it. Yeah, spoilers suck. They suck a whole ton. But seeing spoilers in every interview, sound bite, and quote is the first step to going full Rust and Marty. You never go full Rust and Marty. 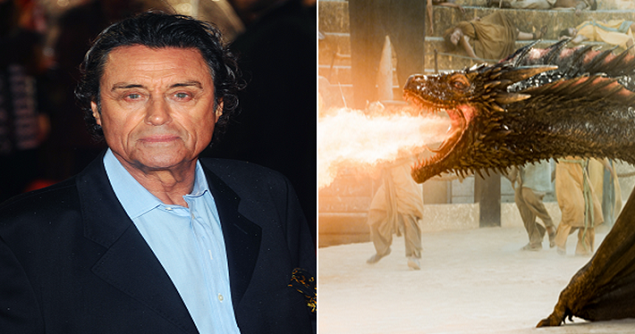