Despite their conflicting personalities, Justice Antonin Scalia and President Barack Obama, conceivably the two most predominant Constitutional scholars of our time, concurred on the one great American pastime better suited for the rivalries of Washington than baseball: poker—a game the late Justice Scalia described himself as “damn good” at, while those privy to the read-‘em-and-weep game-face of President Obama have tagged him “a very good, very conservative poker player.”

Rounders, a cult-hit film (1998), opens with the following observation: “If you can’t spot the sucker in your first half hour at the table, then you are the sucker.” Neither a “damn good” nor a “very good” poker player would have bet the farm on the 2016 elections, including control of the U.S. Senate, raising the ante by declaring, “This vacancy [on the Court] should not be filled until we have a new president.” Sen. McConnell made his imprudent statement less than 20 minutes after the news broke that Justice Antonin Scalia had died. The president, on the other hand, playing his cards close to his chest, wisely remained silent for the next two hours, all the time he needed to reshuffle the narrative of the 2016 election to the Democrats’ advantage.

McConnell has obsessively, impulsively bet against President Obama at every turn, decreeing, ‘The single most important thing we want to achieve is for President Obama to be a one-term president.’

Mr. McConnell has obsessively, impulsively bet against President Obama at every turn, decreeing, “The single most important thing we want to achieve is for President Obama to be a one-term president.” Indeed, the senator lost and continues to lose, doubling down—with tax-payer’s money—against a seasoned card player during the last legacy-making year of his presidency.

If Mitch McConnell is suffering from a political disorder akin to a gambling problem, then for the sake of himself and the nation, he should seek help. And help is so near at hand. “Trump Casinos” provides a listing for identifying gambling addiction, noteworthy among them, “Becoming desperate.”

While the president coolly continues to read the cards and let the senator’s fall as they may, Mr. McConnell’s misplayed bluffs and wild bets are staggering. A 16-day government shutdown that took an estimated $24 billion out of the U.S. economy reduced projected fourth-quarter GDP growth from 3 percent to 2.4 percent and cost some employees their homes as well as their jobs. And backfired! Wholly avoidable fights over the budget and debt ceiling that resulted in Standard & Poor downgrading the U.S. credit rating—for the first time in our history! Wielding the filibuster as his own personal blackjack. Obstructing the president through both terms of his presidency, as Congress’s approval rating dwindled lower than the president’s, provoking one expert to comment, “I sort of think of this as lowest common denominator lawmaking.” Signing on to Sen. Tom Cotton’s insurgent Iran letter, in effect adding the credibility of the Senate Majority Leader’s name to the list of 47 “mutinous” Republican Senators. And now: irresponsibly misleading the public and potentially subverting the Constitution in a desperate effort to deprive a seated, twice-democratically elected president of his constitutional right to nominate a U.S. Supreme Court justice.

The scene: politics and poker. The game: D.C. hold-‘em. At the table: On the far right side, two players in dire straits. The first, Sen. Chuck Grassley, chairman of the Judiciary Committee, clutches a letter signed by every Republican member of the Judiciary Committee as if it were an actual, Constitutional card to play. The second player, Majority Leader McConnell, seated as far to the right of Mr. Grassley as he can position himself, has already given away his whole game—even when flashed with a face card of a favorable suit like Nevada Gov. Brian Sandoval, the trial balloon who burst before being inflated. Opposite them, Nevada Senator (and former Gaming Commission chairman) Harry Reid, assessing the reckless wagering from two such unconservative conservatives, notes it will only yield Grassley the Pyrrhic distinction for being “the most obstructionist Judiciary chair in the history of this country.” Mr. Grassley, all ears of corn, overhears Mr. Reid but, methodically studying the hand he was dealt, pretends not to. True to his trademark no-drama, the president supremely bides his time. It’s a long game.

With the White House at stake and control of the Senate further jeopardized, someone should pull Mitch McConnell away from the table. Compulsive gambling is no winning strategy against a contemplative card player. The bottom line? It may be all in the game, but guess who’s holding the cards? 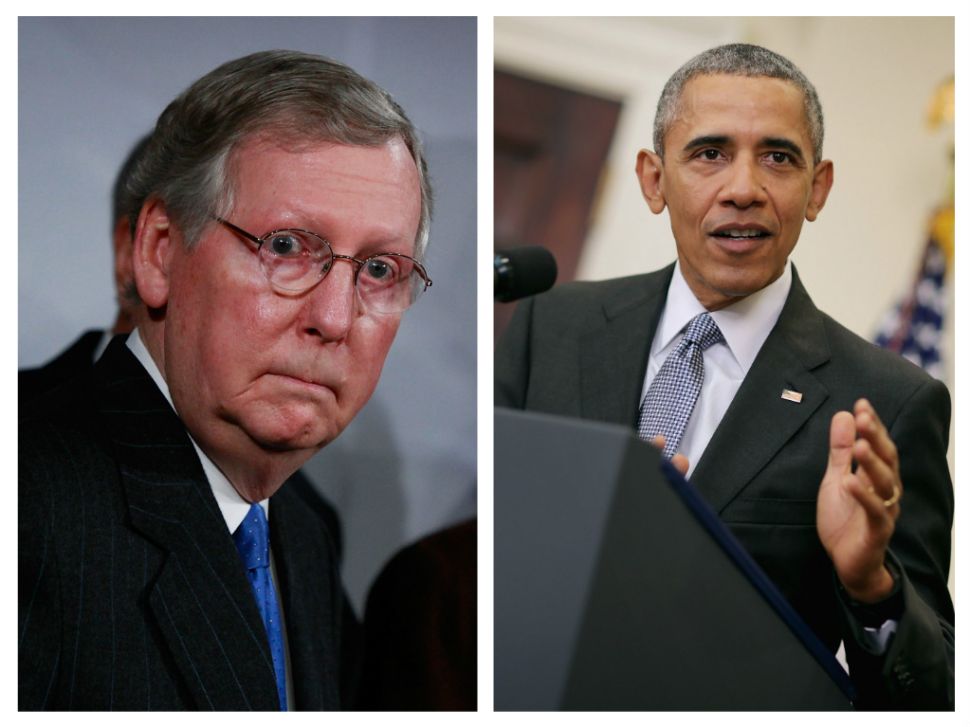