Ohio Gov. John Kasich ventured far into enemy territory today with a stop at a pizzeria in the borough of rival Donald Trump’s birth.

Mr. Kasich met with press and public at Gino’s Pizzeria in Howard Beach in Queens, just miles from where the real estate mogul grew up. The “aw-shucks” style of the Buckeye State pol might seem an odd fit with Howard Beach, known for its population of brash Italian-Americans and occasional well-publicized hate crimes—but Mr. Kasich told the Observer he did not feel like he was in Trump country.

“No, I really feel like I’m in the Big Apple,” he said, jabbing at rival Sen. Ted Cruz of Texas for criticizing New York at GOP debate in Iowa months ago. “You know, New York is so dynamic, somebody was saying this thing about ‘New York values?’ I’ll tell you what New York values are for me: excitement, innovation, change and time just flies when you’re here.”

“We love New York and I don’t consider it anybody’s domain, I think it’s the people domain,” he continued.

“He’s not afraid to speak his mind, he works for the people,” Howard Beach resident Christina Campisi told the Observer, adding that she thought Mr. Kasich would be a could fit for the bottom half of the ticket. “I wish they would work together. I would like him as a vice president.”

Others seemed dubious on Mr. Kasich’s prospects, given that he has accrued only 143 delegates to the GOP convention, compared to Mr. Trump’s 736 and Mr. Cruz’s 463. To clinch the nomination, a candidate would 1,237 delegates, and only 943 remain up for grabs.

“This is a guy who’s got no chance of winning,” said one Gino’s patron who refused to part with his name.

In a contested convention, delegates would have the opportunity defect to a different candidate than the one voters elected them to support. And, citing his experience as a governor and a congressman, and surveys that show him performing well against Democratic front-runner Hillary Clinton, Mr. Kasich said they would flock to him.

“My strength will be two things. One, I’m the only candidate who consistently beats Hillary Clinton in the polls,” he said. “Secondly, I think at some point people are going to want to know who could actually be president, who has the record and the experience to actually lead the country and run the country in what is a critical time in our history.”

The Empire State has a rich trove of 95 delegates, making it a major prize for Mr. Trump, who leads in the polls by double-digits. New York’s delegates are broken up between 81 assigned to the state’s 27 congressional districts—three to each—11 at-large delegates and three who are national party leaders.

If a candidate hits 50 percent of the vote in any district, they get all three of its delegates. A candidate who gets more than half the vote statewide takes all of the at-large delegates.

Whoever wins the state primary, no matter their percentage total, gets all three of the national delegates. The latest surveys show Mr. Trump with 56 percent of the vote, Mr. Cruz with 20 and Mr. Kasich with 19 percent statewide.

“We’re going to compete all across the city and all across the state. It’s going to be a lot of fun,” he said. “I’m going to be competitive as this moves more and more onto my home court, which I consider New York, New Jersey, Pennsylvania, Connecticut.”

Mr. Kasich did have some admirers present, including local GOP Councilman Eric Ulrich, who announced his endorsement of the third-place Republican.

“He’s a common-sense conservative, and he’s the only candidate left in the race who can beat Hillary Clinton in November. “If New York Republicans care about winning in November, they should support Governor Kasich.”

Inside the Italian eatery, Mr. Kasich chowed down on pizza in a booth beside Mr. Ulrich and former Congressman Bob Turner, the Queens GOP boss—initially using a knife and fork. Apparently realizing the magnitude of his faux pas, the governor dropped the utensils and took the slice in his hands, though notably did not fold it, as most experts deem appropriate.

He also spoke with supportive locals, including Marilu Sosa.

“Thank you so much for coming to Howard Beach,” Ms. Sosa told him. “Thank you for not giving up.” 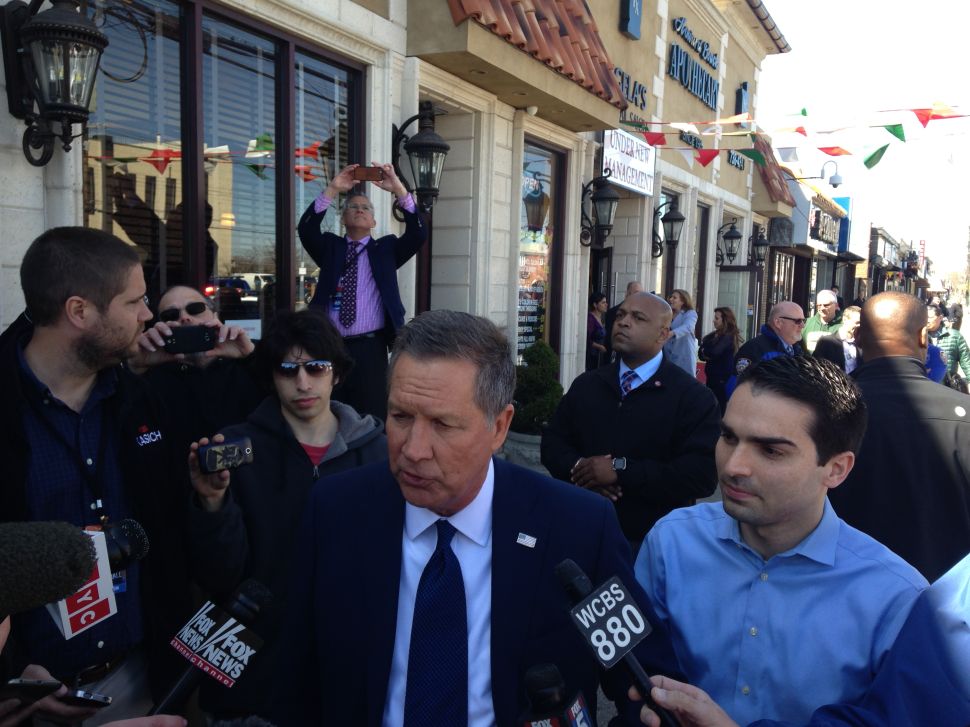