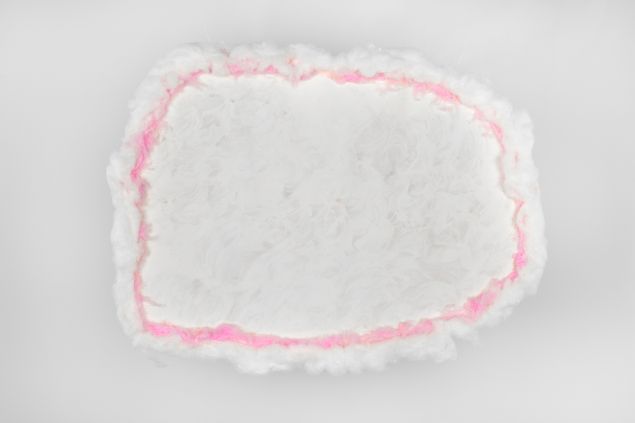 Over in Chelsea, artist Karla Black has sprinkled a little fairy dust on David Zwirner Gallery. All right—it’s actually plaster powder, and more of a carload than a sprinkle. But the effect is the same: Ms. Black’s work transforms the gallery space into a magical realm.

To enter Ms. Black’s new exhibition (on view until March 26), the viewer walks under streamer-like strips of paper that also fall on either side of the entryway. The aptly titled work, Particularly Ready, primes the viewer for an exciting new experience. It functions as a prologue, a portal into the rest of the show. Ms. Black’s palette of light pinks and browns echoes throughout the pieces in the next two rooms, creating a sense of coherence.

In the first gallery, works hang from the ceiling on thick white ribbon. Includes What’s Wanted, There Might Be Others, and Includes Emphasis are all the size of pillows, or packages that one might send to a friend. They evoke the hope of a new gift or a good dream. At about 12 by 7 feet, Or Else It’s Just Surface resembles a wall comprised of stones, albeit one that also incorporates feather trim, mud, oil paint, and body paint. It’s a thin wall, floating in space, which viewers may peer behind. These works all hang just slightly in front of the gallery walls, distinguishing them from paintings, which would be mounted directly on them. They exist in an imaginative space between painting and sculpture. Black grounds these dreamy works with earth tones and materials very much of our world, such as mud and cotton. 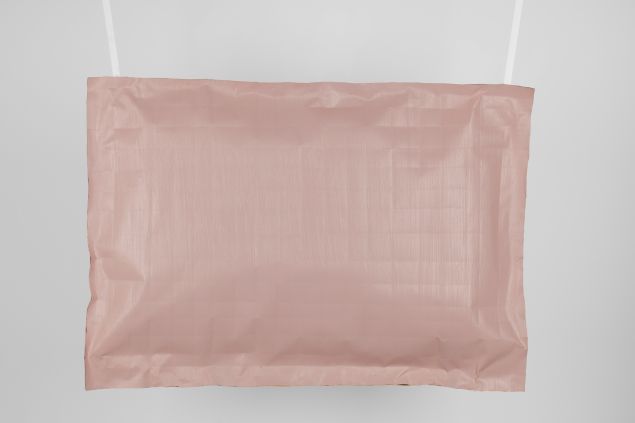 Karla Black’s There Might Be Others, 2016. Courtesy David Zwirner New York/ London

To enter the second gallery, viewers walk under Ways Appear, a door frame comprised of paper, chalk, cotton wool, and ribbon. The frame beckons with the promise of something new and exciting.

But Ms. Black delivers: the second room features a massive floor piece of about 27.5 feet by 30.5 feet, rising seven inches off the floor. Here’s where all the fairy dust / plaster powder went, in addition to powder paint, toilet paper, and glitter. Again, Ms. Black mingles the ethereal (glitter and mounds and mounds of powder) with the mundane (toilet paper). The ruffled toilet paper defines the boundaries of the work and the smaller shapes inside of it that contain the different colors of powder (the browns, pinks, and whites of the rest of the exhibition). Photographs can’t quite render the texture, sparkle, and scale of Includes Use. Instead, viewers must walk around it, stare at it section-by-section, and lean down to appreciate the detail in the material. As in the rest of her show, Ms. Black asks her audience to engage with her work in the way that she has engaged the galleries, transforming them into dreamlike spaces.

Her last show at David Zwirner featured one large floor-to-ceiling installation in which plaster powder again lined the floor, along with bath bombs. Strands of dangling Sellotape connected floor to ceiling. With this new work, Ms. Black offers more viewpoints and an extended experience for visitors. The show progresses like a narrative, opening into its largest, most striking piece only once Black has shown viewers the smaller stuff, initiating them into her delicately crafted, fantastic world. 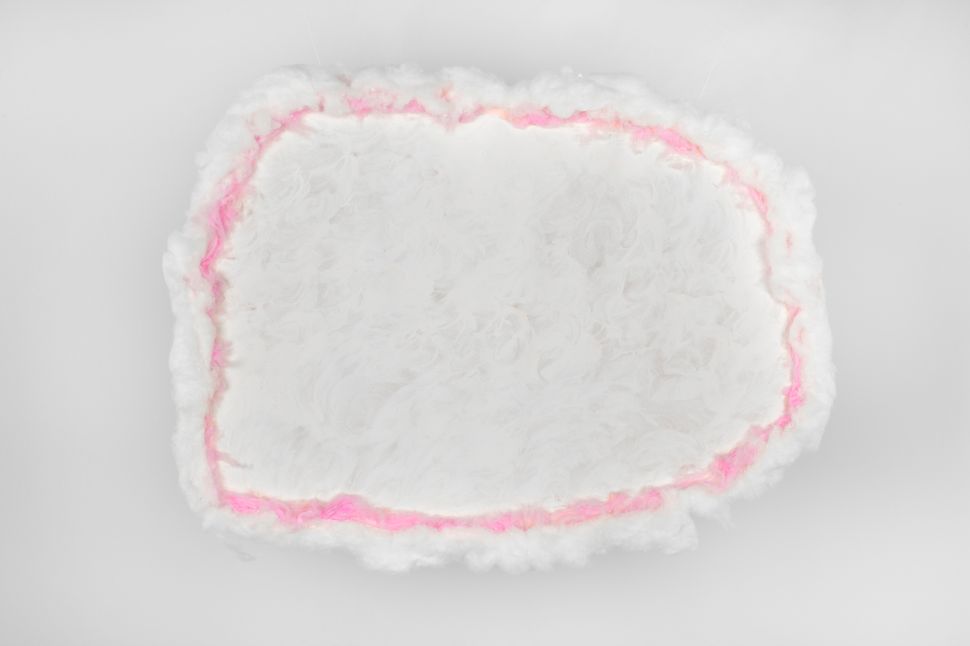