State Senator Kevin O’Toole (R-40)  has become the latest elected official to join the fray of those who are focusing on Kean University. O’Toole is calling on the state Attorney General to look into Michael Barry Blackwell, a consultant hired by Kean to review hiring and enrollment on the campus to ensure there is no racial bias.

O’Toole’s call for the AG’s involvement follows a report made last Friday on NorthJersey.com that Blackwell “has a criminal history that includes convictions for domestic violence and writing a bad check, a résumé that lists a degree from a university that has no record of it and a track record of defaulting on debts.” According to the report, Blackwell served jail time on a simple assault charge as recently as last June and the school he cites as his alma matter, Temple University, has no record of his attendance.

“Reading the report in the Record, I was stunned by the list of list of transgressions linked to Mr. Blackwell and shocked that university officials did not even undertake a rudimentary investigation into who they were hiring with taxpayer money,” said O’Toole in a statement.

Kean University has been at the center of significant political drama due to a coalition of black ministers that have alleged that president Dawood Farahi promotes “structural racism” at the institution. The ministers have called for Farahi’s resignation and have blasted state Senator Ray Lesniak (D-20) for his support of the president. Senate President Steve Sweeney has also gotten involved. Sweeney brokered a conversation at his Trenton office in November between opposing parties. Earlier this month, Sweeney and state Senator Sandra Cunningham (D-31) called on Kean University to hire a new investigator into the issue of racial bias that was from outside the institution. The current investigator is Linda Lewis, an Elizabeth guidance counselor and member of the Kean Board of Trustees.

When Sweeney called for the new investigator, Lesniak questioned why Kean University was being made into a “political hot potato.”

Both Sweeney and Lesniak are vying for the Democratic bid for the 2017 gubernatorial race. Issues at Kean have put the two at odds.

Following O’Toole’s call for AG involvement regarding Blackwell, Lesniak has also fired back.

“Kevin O’Toole is an irresponsible politic hack,” Lesniak said. He then referenced controversial emails O’Toole exchanged with Port Authority personnel. O’Toole was joint committee examining Bridgegate. “He should be investigated for conspiracy to coverup the GWB lane closing by preparing false testimony before the legislative committee making up a phony traffic study.”

O’Toole sent a letter to Acting Attorney General Robert Lougy regarding the investigation he feels should be made of Blackwell.

The letter said: “It appears that basic hiring safeguards were either ignored or influenced to facilitate the hiring of Mr. Blackwell.”

“I think the public needs to know the facts behind the hiring of Mr. Blackwell and why he was chosen at this critical time in the university’s history. I also believe it is important to have your office look into the allegations of racial discrimination at the university that were raised by Black ministers from Essex County.” 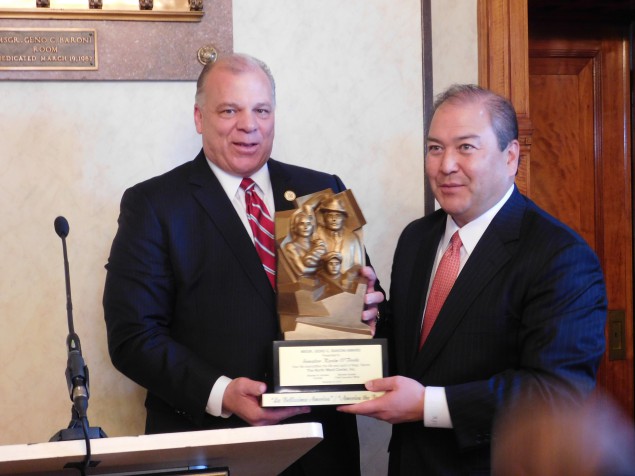