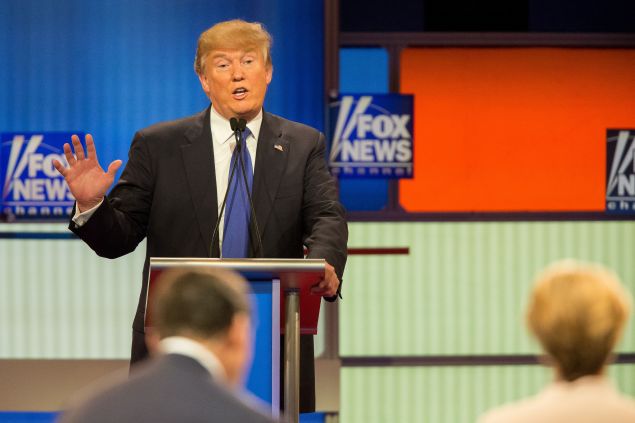 Less than 10 minutes into Thursday night’s Republican presidential debate on Fox News Channel, front-runner Donald Trump was discussing the size of his penis. Of course he didn’t use that word.

He simply acknowledged the implications of a taunt a while back from Florida Senator Marco Rubio that Trump had small hands. And we all know what that means, nudge-nudge, wink-wink.

Before the debate at Detroit’s Fox Theater was even half-over, Lawrence O’Donnell on MSNBC showed a full-screen readout of Mr. Trump’s unprompted words.

“He hit my hands,” Mr. Trump said of Mr. Rubio. “Nobody has ever hit my hands. I’ve never heard of this one. Look at those hands. Are they small hands? And he referred to my hands, if they’re small, something else must be small. I guarantee you, there’s no problem. My guarantee.”

O’Donnell followed the reading with “That is, to my account, the very first time in televised presidential debates, anyway, that any presidential candidate has referred to that particular part of his own body.”

Throughout the debate, the audience booed and heckled from time to time. Mr. Trump stayed gracious when questioned by Fox news actress Megyn Kelly.

And a few minutes after the debate, in an interview on CNN, Dana Bash said to Mr. Trump:

“I can’t believe I’m going to ask you this question, but do you realize you’re probably the first person in American history–maybe even world history–to make a joke about you-know-what on a debate stage?”

“Look at those hands,” Mr. Trump said, as his third wife stood by him. “I have very powerful hands, large hands, relatively large hands.”

Also on CNN, liberal commentator Van Jones again expressed dismay at the uncouth bearing of the Republicans in a race led by Mr. Trump. Senator Ted Cruz of Texas and Mr. Rubio are jockeying for second place while fourth-place Ohio Governor John Kasich hopes to catch up now that the primary trail comes to his familiar turf of the states in the Great Lakes region.

“I cannot let my children watch these debates,” Mr. Jones lamented. “Even people who support Donald Trump have to acknowledge that you don’t have to follow someone into the gutter.”

After all the crazy hand jive, Mr. Trump referred to Mr. Rubio as “this little guy” who has “lied so much about my record.” When he called Mr. Rubio “Little Marco,” Mr. Rubio replied “OK, Big Donald.”

Although ludicrous, Mr. Trump’s Freudian line of discussion was less repugnant than some of the political comments made by the Final Four candidates as this campaign creates its own kind of March Madness.

For instance: Mr. Cruz blamed the decades-long decline of Detroit on “60 years of failed left-wing policy.” And Mr. Rubio praised Michigan’s Republican Governor Rick Snyder for his response to the Flint water crisis. (For the record, Flint’s water was accidentally poisoned with lead when the city was under the “emergency management” control of the Snyder administration. Two criminal investigations are underway. Democrats and others have called for Gov. Snyder’s resignation).

Thursday’s debate took place in an ornate old entertainment palace on Woodward Avenue, the main street of the Motor City, about a mile from Joe Louis Arena, where the Republican convention nominated Ronald Reagan in 1980.

At the start, moderator Bret Baier urged the audience to maintain a decorum “somewhere between a library and a Red Wings game.”

Throughout the debate, the audience booed and heckled from time to time. Mr. Trump stayed gracious when questioned by Fox news actress Megyn Kelly.

In the first Republican debate many weeks ago, Ms. Kelly challenged Mr. Trump’s long history of misogynistic and sexist comments. Later, Mr. Trump speculated that she must have been on her menstrual period.

Mr. Trump dominated Thursday’s debate with his bearing and his interruptions. He showed again that he has perfected the art of interrupting with short shouts.

This annoyed Mr. Cruz, who told Mr. Trump to chill out.

Most of the answers to most of the questions were pieces of stump speeches known by heart to the candidates, the questioners and the audiences. Speaking of hands, Mr. Cruz said he was on the side of working folks who earn “callouses on their hands.”

Mr. Trump seemed annoyed that he again had to disavow support of David Duke, white power groups and the Ku Klux Klan.

He was vague about it when asked about it last Sunday. Mr. Trump vowed to destroy most of what he called the “Department of Environmental Protection.” (The issue of climate change was not discussed). Oh, and Mr. Cruz said he would abolish the Internal Revenue Service.

The two-hour discussion took its usual turn into Mr. Trump’s plan to build a big, beautiful wall on the nation’s southern border to keep out the Mexicans and their drugs. “The border is a disaster,” Mr. Trump said. “Like a piece of Swiss cheese.”

He shrugged off an attack Thursday morning from 2012 Republican nominee Mitt Romney, the former governor of Massachusetts. Mr. Romney is urging Republicans to vote in the remaining primaries for any candidate who has a chance to beat Mr. Trump.

“He (Mr. Romney) is a jealous guy,” Mr. Trump told Bill O’Reilly on Fox right after the debate. “He’d like to run but he doesn’t have the guts. He’s a choke artist.”

Regarding other enemies, Mr. Trump suggested during the debate that he would order torture of terrorist suspects because “these animals” cut off people’s heads in the Middle East.

“We should go tougher than water-boarding,” Mr. Trump said.

When asked if American soldiers would refuse his orders to commit war crimes, Mr. Trump said: “They won’t refuse me. Believe me.” Mr. Trump also said he will be a “great leader.”

In a post-debate interview with Katy Tur of MSNBC, Mr. Trump said he thought the debate would be “more evil, more vicious” than it turned out to be. This was the 11th. episode of this hit reality series.

“It’s getting boring,” Mr. Trump said of the debates. “I think it’s ridiculous.” 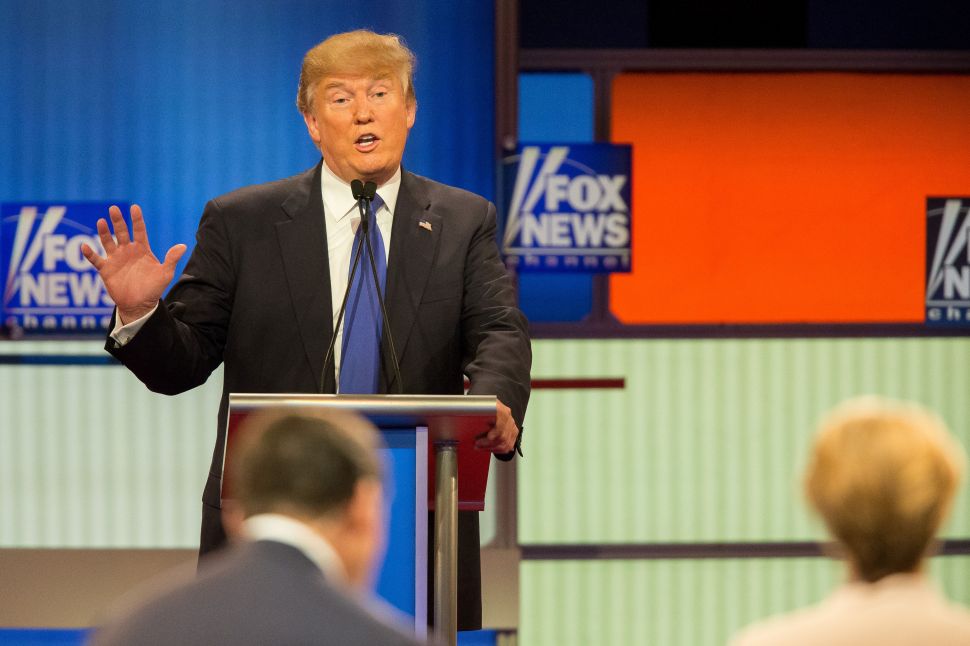