“You are going to learn nothing!” the boisterous Mr. Andrés, already buzzed by 6:30 p.m., screamed at the crowd in The Foundry.

Learning during that Friday’s property-wide, Mr. Andrés-hosted Dine-N-Dash food festival was not the point. This was about eating and drinking a lot. This was about a cooking demo that urged people to add way more tequila than necessary to cocktails. It felt rock ’n’ roll the way Mr. Andrés always does. He’s a loose chef who acts like he gives zero fucks, but he’s there to perform with precision, there to remind you that you want a guy like this carefully shaving Iberico ham and applying liquid nitrogen to your food and drinks, because no logical person should attempt to do that themselves.

Dine-N-Dash brought an energy to SLS Las Vegas that resembled the property’s grand opening in 2014. The resort’s isolated location on the northern end of the Strip has made it a bit tough to attract crowds, but the place was a scenester’s paradise that Friday. We were also at SLS on New Year’s Eve, which was a good time, but Dine-N-Dash felt like a bigger party.

Vegas can be a cutthroat town, but there was an all-tides-rise vibe in the building as visitors endured huge lines for foie gras cotton candy, spherical olives and charcuterie at Mr. Andrés’ Bazaar Meat. A big crowd waited for dumplings and five-spice duck at Mr. Andrés Ku Noodle while the chef’s crew also served “Jose’s Tacos,” Iberico ham with caviar, by the blackjack tables. There was also a cook in the middle of the casino floor shaving seemingly unlimited plates of Spanish ham on a gaming table. There was lamb tagine at Cleo, pizza at 800 Degrees, lobster-truffle chawanmushi at Katsuya, sliders and beer at Umami Burger, and barbacoa tacos at Northside Cafe during the walkaround tasting extravaganza.

By 9 p.m.. Mr. Andrés and Mr. Stone were playing at a $10 blackjack table at Bazaar Casino. Mr. Andrés chatted up fans. Mr. Stone smoked and bet with green $25 chips. At 10:30 p.m., when electro-rock band AWOLNation was halfway through its set at The Foundry, Mr. Stone was still gambling because he wasn’t in L.A. and there was no reason to go home before midnight.

AWOLNation played an all-ages show in the 1,800-capacity Foundry, so there were purposefully dressed-down teenagers waiting outside The Foundry an hour before doors opened. There were 12-year-olds who had come with their hipster, bearded dads. There were old dudes talking to college kids about the magic of live shows. There was a sea of dancing and cell-phone lights shining like a constellation during hit songs including “I Am,” of course.

The long thin room, with excellent sightlines from every angle, felt like an intimate venue for major acts, which might be just what the resort needs. When SLS opened in August 2014, the space that is now The Foundry was the Life nightclub. Since then, EDM crested and it became clear the city didn’t need another place for people to see former members of Swedish House Mafia. The Foundry, which hosted a Lil Wayne concert the night after AWOLNation, has Santigold, X Ambassadors and Adam Lambert shows scheduled in March and April. If food is the new rock, maybe rock is the new EDM.

And Vegas is always about chasing what’s new. Good thing is, there are a lot of noteworthy newcomers.

Just off the Strip on Sahara Avenue, not far from SLS, is our favorite new place to have lunch in Las Vegas. Flock & Fowl, from indie-restaurant power couple Sheridan Su and Jenny Wong (who also run Fat Choy), serves Hainanese chicken rice that really does resemble what you’d get at a hawker stand in Singapore.

This is classic Asian street food made with the finest of ingredients by Mr. Su, who previously worked for globally acclaimed chefs including Joël Robuchon and David Myers. The soy sauce, sambal and ginger-scallion sauce you’ll want to dip your poached and deboned Mary’s free-range chicken into are all made on-site. The combination of the rice and the broth you can get on the side is a masterpiece, a flavorful dish in itself, and you can and should turn your quick-service lunch into a full-on feast by adding sweet, perfect Chinese sausage, a fried organic egg and an order of buttermilk-fried chicken skins.

‘I cannot think of a restaurant that has ever translated better in Las Vegas.’

Our favorite new place for dinner is Carbone at Aria. This, of course, is an outpost of Mario Carbone, Rich Torrisi and Jeff Zalaznick’s Greenwich Village Italian-American restaurant. The Aria rendition is a colossus that is both Rat Pack vintage and Vegas modern, a place where upping the ante means having caviar before your Caesar salad. It’s where New York chef David Chang gorged on langoustines during a recent Vegas visit and declared on Instagram that, “I cannot think of a restaurant that has ever translated better in Las Vegas than Carbone.”

Another way to have a memorable meal at Carbone: Start with something from the raw bar like the gorgeous tuna Calabrese or a luxurious lobster cocktail. Order linguini vongole and spicy rigatoni alla vodka. Get off-menu meatballs and the veal parm for a double dose of red-sauce bliss. Finish with carrot cake and limoncello.

Aria is the middle of an impressive makeover, with other newcomers like Bardot and Herringbone contributing to the sizzling dining scene and the forthcoming Jewel nightclub getting ready for its spring debut.

Another notable Strip transformation is nearby at The Cosmopolitan of Las Vegas, which recently unveiled Andy Masi’s Clique lounge, a stylish pre-dinner or post-dinner spot for tableside mixology and habit-forming fried Oreos. Located just off the casino floor, Clique is part of new CEO McBeath’s quest to create more energy around the hotel’s gaming tables. Based on the ultra-VIP high rollers we saw rolling into Clique during Consumer Electronics Show week, this plan is already clicking.

Soon, The Cosmopolitan’s formidable collection of restaurants will include N.Y. transplant Beauty & Essex, international hot spot Zuma and L.A. transplant EggSlut, which should make the haze of Vegas nights blending into Vegas mornings even more delicious. And the resort just announced the news that Mr. Chang’s Momofuku and Milk Bar are on the way too.  The game is changing yet again. 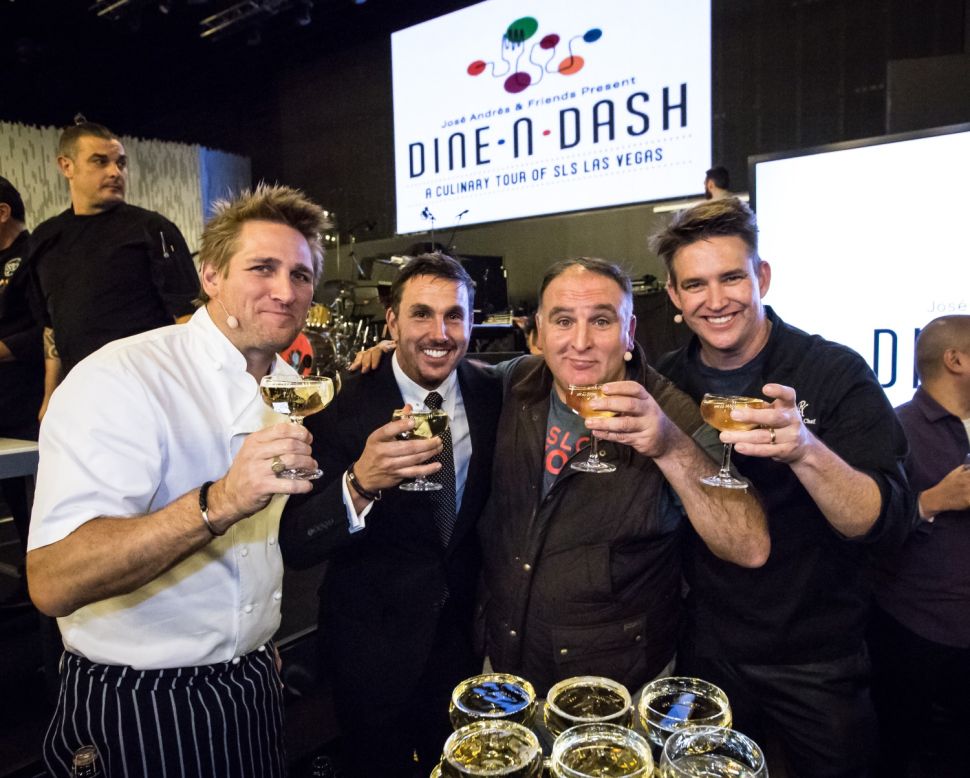