In 1972, she co-wrote Sappho Was a Right-On Woman: A Liberated View of Lesbianism, which her longtime partner and co-author Barbara Love, described as “the first book that came out with a positive view of lesbianism.”

Abbott, who died in a house fire on April 15 last year at her home in Southold on Long Island’s North Fork, came to prominence at a time when homosexuality remained classified as a mental illness by The Diagnostic and Statistical Manual of Mental Disorders and many lesbians in New York kept the closet door shut. “We were like cockroaches,” Ms. Love recalled. “We only come out at night, and [Abbott] said, ‘My mother did not bring me up to be a cockroach.’ ”

Abbott was known for bluntness and an agile mind. “No matter the issue, Sidney grasped it instantly,” said author and activist Rita Mae Brown. “One never needed repeated and laborious explanation.”

“Sidney,” she added, “put her shoulder to the wheel on feminist issues and she understood the pressure against lesbians.”

Ms. Brown, Ms. Love and Abbott helped launch Lavender Menace, a group that pressured the feminist movement to address lesbian concerns. Most notably, it protested the exclusion of lesbians and lesbian issues from the Second Congress to Unite Women in 1970, a prominent feminist event. “She was raising consciousness within the mainstream,” recalled Ellen Shumsky, a fellow activist. “Then there were other people who were raising consciousness within the radical lesbian community.”

Ms. Love and Abbott also fought together to ensure that Identity House, originally a walk-in aid station for LGBTQ individuals, as well as a psychiatric research center, continued to offer hands-on assistance to clients after its academic wing attempted to focus solely on psychology rather than social work.

Toward the end of her life, Abbott—at that time wheelchair-bound—worked with Rev. Addae Kraba, then the minister of the First Universalist Church in Southold, to make the congregation more welcoming to the LGBTQ community.

Despite her apprehension, she campaigned with local groups to fight for equal rights. “She was just a very fair person in terms of social justice,” Rev. Kraba recalled. “She was really a very warm and caring individual, and sometimes people didn’t see that side of her, they saw the brusque side.”

In her book, Abbott wrote that many lesbians were “among the helpless damned” of society. Without the courageous work of Abbott and advocates like her, perhaps they still would be. 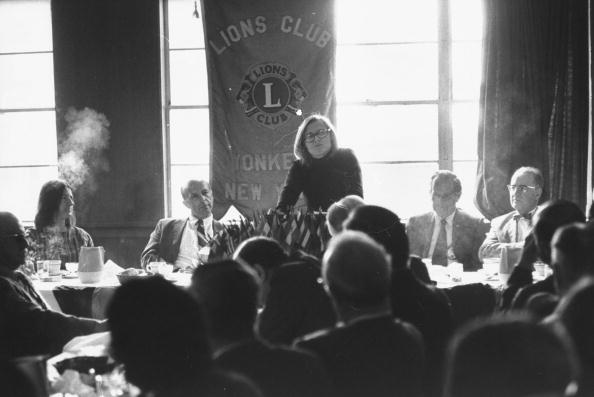