This was likely the last episode of Agent Carter, which would have been upsetting even if this hadn’t been a weak finale. It didn’t wrap up a lot of the thematic elements in a satisfying way, even if the plot ultimately came together. My disappointment is less with how things ended than with the execution — mostly devoid of tension and with very slow pacing.

The episode starts where last week’s ended. Peggy pulls a gun on Thompson, threatening to shoot if he tries to detonate his bomb. Instead, something explodes in the factory, and the three agents rush in to investigate. Zero matter lies all over the floor in convenient blobs so our heroes can avoid it. They find Dr. Wilkes, still alive and cured of his zero matter affliction, which he simply expelled from his body. I’m not sure this logic checks out, because how could it have given him his body back without being inside him, but whatever. Whitney is also alive, so only evil Vernon was the victim of the blast. Whitney absorbs all the zero matter into herself and it is really cool and villainous and it seemed to be going somewhere cool.

And then the magic evaporates into the slowest foot chase ever. Jarvis ends it when he hits Whitney with his car, Howard Stark in the back seat. Samberly rolls up in his car, and they bolt. Howard is a shining light of inappropriate jokes and I can only hope that someone at Marvel is working on a Howard and Jarvis web series where they raise Tony. Call me Marvel. I’ve got ideas.

Meanwhile, L.A.’s most romantic mobster, Joseph Manfredi, worries that Whitney is losing her mind. She spends all day locked in her room, writing on the wall. He tells his grandmother that she’s not acting like the girl he fell for because of the zero matter, which shows he’s just another man who doesn’t understand her. This is the real Whitney — vindictive, intelligent, power-obsessed. I thought this would build into some encounter between the two, but the episode veers out of this territory.

Instead, Manfredi goes to Howard’s house to enlist their help in saving Whitney from the zero matter. Apparently he and Howard go way back, which is hilarious but weird. Wilkes points out that Whitney has an “innate lust for power,” which Manfredi shrugs off. Love is blind, I guess. Manfredi will lure Whitney out of her room while they take photos of what she’s been inventing, a device to reopen the gap so she can pull more zero matter. Instead, they’ll build the device and open the rift, separate Whitney from the zero matter, and knock it back in.

Manfredi asks Whitney to help him intimidate one of his crew while Peggy and Sousa sneak into her room. Again, the pacing here is odd. Peggy and Sousa leisurely take photos and banter until they hear Whitney outside and run, but not before Sousa changes one of her diagrams to slow her down. This never comes up again.

Instead, our three scientists — Stark, Wilkes, and Samberly — fight over what to name the machine. Peggy uses flattery to move it along because she is the only competent person on this show. Except for Jarvis. Cut all our heroes working together to finish the machine, including Howard hitting on Rose, which is amazing. I’m just going to pretend that Rose is Tony’s mother. Sousa and Wilkes work together, and Wilkes apologizes for being the worst. Peggy and Jarvis work together and she asks about Ana because she’s a nice person. Thompson interrupts to ask how he can help, and Peggy tells him to collect dinner orders. YES.

They decide to open the rift on Howard’s studio lot, out of harm’s way. Wilkes warns everyone that if they get too close, they’ll get sucked in, an indelicate foreshadowing. Incidentally, the rift looks a lot like the eye of Sauron.

While they wait for Whitney, Thompson and Peggy have a sexually charged exchange where she promises she won’t turn him in for working with Masters. Thompson is the worst, but their chemistry cannot be denied. He gives Peggy Vernon’s not-Hydra pin, which is really a key. and then Whitney arrives. She looks really great. What a fun villain!

Alas, she does no fun villain stuff. Instead, they perfectly execute their plan What a boring, simple demise for a character that was anything but. Peggy didn’t even have a showdown with Whitney! Maybe that’s the danger of making a villain whose powers are “kills everything with super goo,” but you have to work with what you’ve got, right?

Instead, complications arise with the rift itself, because Howard’s device stops working. The backup device is too close to the rift — anyone who goes for it will get sucked in. They volunteer to do it in quick succession, only to realize that Sousa has already tied himself to a pole and is halfway there. The cord is clearly slipping as he cranks it closed, but no one jumps to grab it until it breaks, when Peggy tries to pull him down. The tension here felt manufactured.

The gamma ray gun that could close the gap isn’t charged yet, but Jarvis has an idea. He gets Howard’s hover car, puts the gamma core in it, and remotely flies it into the rift. Boom. The day is saved, without any sacrifices or emotional reveals or drama. This is the climax of a whole season?

Then everything wraps up. Howard gives Wilkes a job, and Peggy lets Wilkes down easy. She apologizes for getting Ana hurt, but Ana doesn’t accept that she did anything wrong and simply hugs her. It’s a nice moment.

Whitney is in a mental asylum, lost in her mind where she imagines her dead husband telling her she can rise again. Manfredi visits with flowers, though an orderly warns that she’ll just use them to rip open her face. Ouch.

Jarvis drives Peggy to the S.S.R. office, where he tries to convince her to stay in L.A. She tells him she has a lot of reasons to go back to New York, including her roommate Angie. But there is one reason to stay: Sousa.

In his office, Sousa tells her that her actions at the studio were “ill-advised and reckless.” According to her very own code of conduct, she should have let him die. It’s cute and they’re just oozing chemistry and if I wasn’t on board already this would have worked. Instead of responding, Peggy kisses him. Many fans complained on social media that the first season of this show was devoid of a romantic subplot, and this season heavily featured one, but I’m not bothered by the change. That’s life — even female super spies fall in love.

Thompson, meanwhile, is packing for New York when Sousa calls to let him know Peggy’s going to take some more vacation time. A knock on the door makes Thompson hang up, where he’s shot by a masked, gloved assassin. They take Peggy’s file and leave. The end.

Despite the lackluster finale, I hope the show returns. We know Peggy makes it until at least 2014 — don’t you want to see what happens in those sixty-seven years? I want Peggy in 1955 and 1968 and 1974 and in Washington and London and Moscow. I want to know what happens to Dottie and Whitney and Angie and Sousa. There are so few stories about female superheroes, and I don’t want to lose one of the only one’s we’ve got.

But maybe if ABC doesn’t bring it back, maybe it will become a cult favorite and Netflix will give us four ninety-minute episodes in eight years. Stranger things have happened. 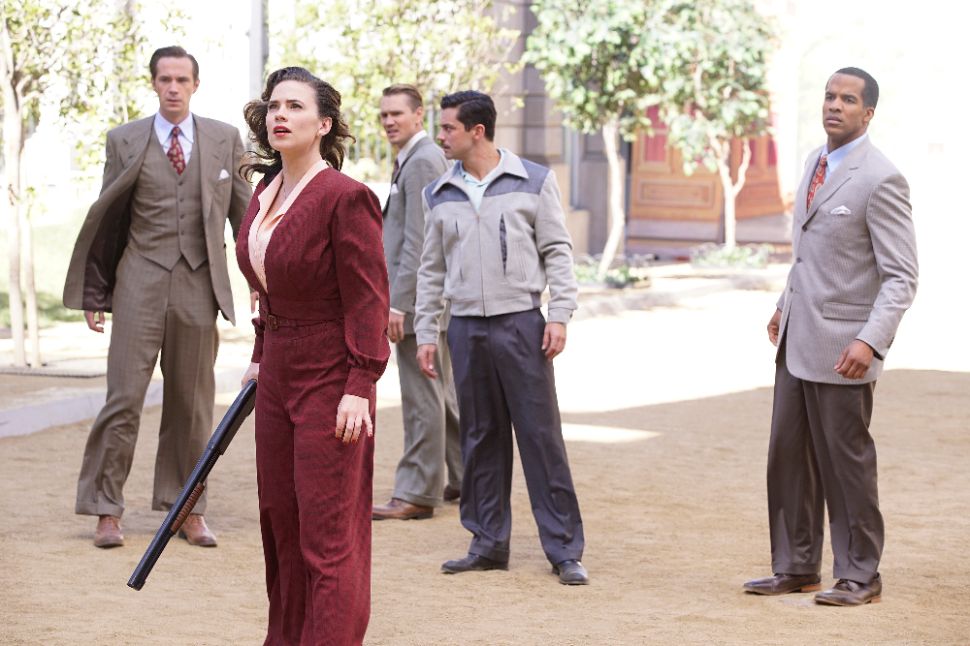