I finished the second season of Marvel’s Daredevil the same day three suicide bombers killed, at least, 31 people and injured another 300 in Brussels, Belgium. It’s at once sobering and a strange, strange feeling, to have this devastating real-life tragedy intertwined in your head with a comic book series about a blind man who dresses up like the Devil to fight crime. It makes a cultural juggernaut like Marvel seem suddenly minuscule by comparison. It puts things into place. It’s funny–almost funny–that in season one Matt Murdock describes what he “sees” with his four heightened senses is “a world on fire.”

Because I see the same thing.

If Brussels, or 9/11, or the Bataclan, or…just the world in the last few 100 years or so has taught us anything it’s that life, real life, is scary; scarier than anything we could dream up in a series of comic panels or Netflix chunks. Yes, the arguments you would definitely see if you opened Twitter right now over Batman vs. Superman are annoying, but I’d say we need the superhero medium now more than ever, if for nothing more than an escape.

And…even that isn’t true. We don’t need the superhero genre, we just need heroes. Any heroes. When the media is so much shouting into a void, and all is sirens and anticipation of the next shooting–whether it’s a terrorist, officer of the law, or your own neighbor pulling the trigger–I can’t help but think of the opening to Alan Moore’s Watchmen. And to be clear, that’s terrifying; the thought of us, confused and desperate, our hands to the sky, shouting “save us.” Daredevil‘s second season presents an alternative; if not a hero than a hero-adjacent, about ten steps to the left of whatever is right or wrong–Frank Castle, the Punisher (played by The Walking Dead‘s Jon Bernthal). He isn’t Watchmen‘s Rorschach, who yearns to reply to humanity’s cries for protection by looking down and whispering, “No.”

As evidenced by his very first Netflix appearance, Frank Castle prefers to look down, pull the gun he had strapped to his ankle, and whisper “bang.”

This is the central question to Daredevil‘s sophomore outing–what is a hero? Is it Matt Murdock as Daredevil, whose moral compass doesn’t allow him to kill the criminals he apprehends, but does let him alienate any and all loved ones in the process? Is it Frank Castle as the Punisher, who shares no such qualms about putting a bullet through a thug’s skull, but whose every action is spurred by the memory of his late caught-in-the-crosshairs family?

Would you sleep better at night knowing you didn’t kill, or that you killed the “bad” to save the “good?”

I’ve seen a ton of critiques that Daredevil–always the darker, brooding cousin to Marvel’s sunny Cinematic Universe–is overwhelmingly dire. And ho-ly-shit, that critique isn’t wrong. But Jon Bernthal–familiar to most nerds as the jealous and brooding Robin to Rick Grimes’ Batman– is the perfect Punisher because there is zero fun in his performance. There are none of the alarmingly charming quirks of Vincent D’Onofrio’s Wilson Fisk in Bernthal’s Punisher (when D’Onofrio does eventually show up, he’s literally a massive breath of fresh air).

Instead, everything about Frank Castle is ugly. Where Daredevil is elegant and controlled–if you drank every time he backflipped, you’d be dead by episode three–Castle is brutish. He wasn’t trained in any mystical martial arts. He’s just a former Marine with a crack in his skull and a revenge list that stretches from Midtown to K’un L’un. Compare the one-shot hallway scene from Daredevil’s first season, or the longer variation from season two, to Frank Castle’s prison hallway fight from episode 9, “Seven Minutes in Heaven.” Where Murdock’s scenes are breathtaking for their technicality, Castle’s is uncomfortable in its violence–all sharpened shanks and broken bones.

And yet, aren’t both characters just two sides of the same bloody coin? It’s disturbing just how alluring Frank Castle’s methods are. “You hit them, they get back up,” Castle tells Murdock in episode 3, “New York’s Finest.” “I hit them, they stay down.”

And isn’t that the crux of everything, to the heroes we admire to the news we watch to the presidential candidates we vote for? We want results. And Frank Castle provides results you can measure, albeit from the end of a sniper scope. Even Deborah Ann Woll’s Karen Page–who honestly just might be the last genuinely good person on this show–can’t fully condemn the Punisher. Because in the end, who can argue with results? Frank Castle hits crime, and crime isn’t released from jail six months down the road.

And on the flip side–that’s terrifying. To us. To Matt Murdock. Where once Charlie Cox’s declarations about “My city!” and “My mission!” were peppered with pure confidence, this is something different. In every frame, you watch Murdock willing himself to believe anything he says, that his way–the way with a moral code and no bullets–is still the right way.

Oddly enough, at first glance, the show itself seems to take a definitive stance on the subject. In the first episode, Castle takes out an entire Irish gang with a machine gun. In the finale, he stands on a rooftop picking off members of the Hand. Absolutely nothing has changed–except for the soundtrack. The Irish mob hit is preceded by a slow, creeping sound, the kind usually reserved for the approach of a horror movie’s monster antagonist, while the finale fight is driven by a soaring score, the type you hear whenever the Avengers get around to assembling.

So…what? What’s the takeaway? By season’s end, have we accepted The Punisher as the justice we need today–full stop, full measure, no return? Tempting, but no. What Daredevil is doing by showing us the opposite end of the spectrum is highlighting what lies in the middle. Because what’s between a rage-driven gun nut and a righteous ninja with super-senses? Us.

Watch the news. Turn on a presidential debate. Browse Twitter. Get updated on the news from Belgium and the news from right down the street and know that it’s okay to be scared. But don’t pick a side. Don’t be either a Punisher or a Daredevil. Be something in the middle. Be you.

When Karen Page arrives at the scene of season two’s climactic battle, she answers the question of what is happening with a seemingly throwaway line: “It might be the end of vigilantes in New York.” But she’s right. By episode ten the agendas of everyone from Daredevil to the Punisher to Elektra to Stick have veered so far eschew from protecting the city and into a downright nuisance, bordering on a menace. It’s a question asked since someone first put the word “super” next to the word “hero,” from Daredevil to Superman to Batman to etc etc ad infinitum –is someone really protecting us from evil if he or she brought that evil to us in the first place?

Which is why Karen’s late voice-over disguised as New York Bulletin story –while cheesy, and not really how articles work–is still a pitch-perfect ending to Daredevil season two:

Look into your own eyes and tell me you’re not heroic. That you have not endured, or suffered, or lost the things you cared about most. And yet here you are…

Watch the news. Turn on a presidential debate. Browse Twitter. Get updated on the news from Belgium and the news from right down the street and know that it’s okay to be scared. But don’t pick a side. Don’t be either a Punisher or a Daredevil. Be something in the middle. Be you. That is the takeaway. Not that we need to cross lines. Not that we need to show superhuman restraint. But that the most heroic thing you can do is to see, to live in a world on fire, and to keep fighting anyway. 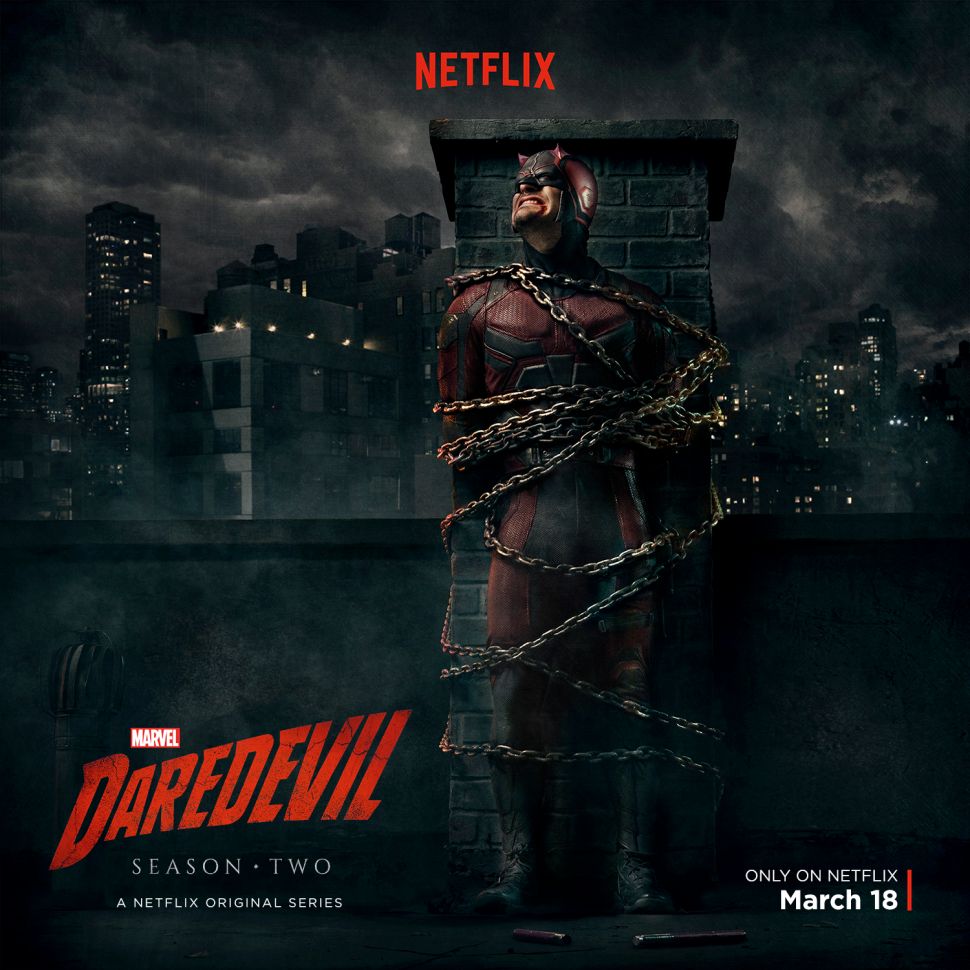