Last Saturday our organization, The World Values Network, took out a full-page ad in The New York Times calling on Hillary Clinton to repudiate her relationship with Sid and Max Blumenthal. The ad, titled “Hillary Clinton Must Disavow Her Anti-Israel Advisors” gave a small sampling of the dozens of highly critical, anti-Israel emails Hillary’s longtime advisor Sid Blumenthal sent to her during her time as Secretary of State. Sid’s emails include a variety of articles written by his son Max, a man whose mediocrity on the Middle East and Israel is outmatched only by his malignant hatred of the Jewish State. Max’s articles are full of the usual anti-Israel drivel the public has come to expect of him.

The ad made a huge impact and has been picked up by publications throughout the world, and was widely discussed at this week’s AIPAC policy conference in Washington, DC. More than anything, the ad has exposed the advice on Israel Ms. Clinton received from her inner circle. It’s deeply troubling that a potential future President of the United States is receiving guidance from—and praising the work of—a man who compares Israel to the Nazis.

Ms. Clinton has yet to explain why she paid Sid Blumenthal when he was sending such brutal anti-Israel rhetoric and why her emails show glowing praise—on multiple occasions—of Max’s Israel-hating attacks.

Max is known for creating the hashtag #JSIL—the Jewish State in the Levant—a play on the acronym ISIL, aka ISIS. In Max’s twisted mind, the democratic State of Israel is on par with ISIS. In a taped interview at Penn State, Max demands the Jewish State be brought to an end. As he explained it, “There should be a choice placed to the settler-colonial population [as Max describes Jewish Israelis]: “You become indigenized” and “have to be willing to be a part of the Arab world.” Or else you have to leave. He added: “This choice needs to be placed to the Israeli Jewish population and it can only be placed to them through external pressure, the kind of pressure that the BDS movement is exerting.”

It must be pointed out that even notorious Israel-hater Philip Weiss, editor of the anti-Israel website Mondoweiss, actually took issue with Max’s words, writing that “similar attitudes about indigenous culture have been used in intolerant ways in our society. I see some intolerance in that answer.” When one of the biggest Israel bashers rebukes someone for going too far with their hatred of the Jewish State, you can be certain that something is very wrong.

On Sunday, there was a large and ugly anti-Israel demonstration outside of AIPAC. Suddenly, as I was walked nearby with my family and staff, Max Blumenthal ambushed me with cameras and a gang of angry pro-Palestinian agitators. As he accosted my family and me, waving a cell phone in my face, Max lost it completely—verbally assaulting my group. Appearing downright thuggish as he stood surrounded by loud pro-Palestinian protesters, he hurled accusations and insults, calling my children “psychotic” and slandering my wife by falsely accusing her of pushing him. On Twitter he wrote: “I’ll post full video soon. See Shmuley’s wife pushing me and others.”

As Max is a bit of a buffoon, it comes as no surprise that he falsely identified my wife as someone else—just as he falsely claims to have been pushed. His unhinged vitriol toward us is downright scary. As he continued his wild tirade, he followed me—his uncontrollable,  unhealthy obsession glaringly obvious—going berserk after being exposed for his rabid anti-Semitism and vicious hatred of the Jewish State.

It was extraordinary to see a man who advises a presidential candidate, and son of the man who is arguably the Clintons’ most trusted associate over the last two decades, reduced to appearing at an anti-Israel rally outside of AIPAC. You would think his father would have warned against such incompressible public displays, but such is the nature of extreme hatred—it causes you to act in ways you can’t control. When you match a fanatic personality like Max Blumenthal to a despicable cause like destroying the Jewish State of Israel, you get some pretty scary results.

Max’s anti-Semitic book Goliath is poorly-researched debris which Eric Alterman of The Nation said could be in the “Hamas Book-of-the-month-club”. It falsely maligns the State of Israel and includes chapters such as “How to Kill Goyim and Influence People,” “The Night of the Broken Glass,” “The Concentration Camp,” and “This Belongs to the White Man.” The book was such trash it was widely ignored, with Sohrab Ahmari, assistant books editor at The Wall Street Journal tweeting, “We donate hundreds of review copies a week (only review miniscule % of books); but Goliath doesn’t even rise to donation-worthy.” In other words, they literally threw the book in the garbage.

We are now left with the disturbing question of why Hillary Clinton relies on strongly on anti-Israel advisors and whether or not she will take action to distance herself from them.

Shmuley Boteach, “America’s Rabbi,” is the international bestselling author of 30 books. He is the only Rabbi ever to win the London Times Preacher of the Year Competition. A noted global advocate for Israel, he will shortly publish The Israel Warriors Handbook. Follow him on Twitter @RabbiShmuley. 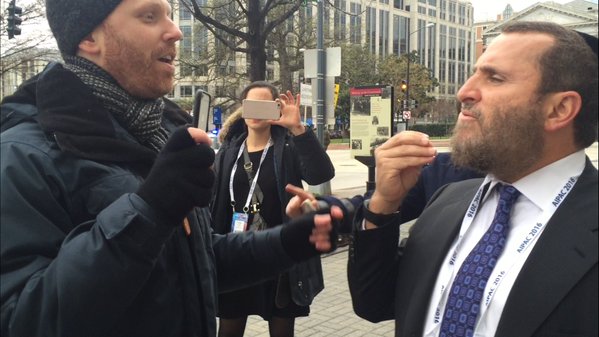