During the second debate of the 2012 presidential election, Candy Crowley asserted herself in a way that just may have changed the course of history. Ditching the moderator’s long-established protocol as neutral poser of probing questions, the CNN correspondent corrected Mitt Romney’s answer to her inquiry about the attack on the U.S. diplomatic mission in Benghazi, Libya.

The exchange clearly rattled Mr. Romney. After crushing President Obama in the first debate, Mr. Romney had felt new energy behind his campaign. Ms. Crowley’s unusual self-appointment as fact-checker helped unravel Mr. Romney and he never quite regained the confidence or poll numbers he enjoyed after his strong first debate.

Presidential campaigns are astronomically complicated and it’s facile to point to one thing that derailed a candidate—especially a candidate as defective as Mr. Romney, who lost for U.S. Senate after disavowing Ronald Reagan, didn’t run for re-election in Massachusetts, got beaten by a mummified John McCain in the 2008 primary after acting like the biggest dick I’ve ever seen in GOP politics (that’s saying something), and could barely dispatch even Newt Gingrich and Rick Santorum in 2012 before getting his clock cleaned by a sitting president with the lowest re-elect numbers in history. As Rudy Giuliani’s campaign manager Mike Duhaime memorably put it, Mr. Romney’s entire contribution to politics adds up to “mediocre one-term governor.” That Mr. Romney is given airtime to broadcast his wisecracks and is even being bandied about as some kind of anti-Trump relief pitcher says far more about the lack of bench in the GOP than about Mr. Romney’s appeal, which has been proven over and over to be limited.

Still, there is no doubt that the Candy Crowley episode played a role in arresting Mr. Romney’s campaign. She clearly got in his head. Fifteen months later, Mr. Romney told The Daily Caller, “I don’t think it’s the role of the moderator in a debate to insert themselves into the debate and to declare a winner or a loser on a particular point.” Considering just a few examples—the fight to nominate a replacement for Justice Scalia or the Iran deal—it’s easy to see how differently things may have turned out had another moderator been on stage with Mr. Romney on October 16, 2012.

But there was another, more personal side effect for Ms. Crowley. Her willingness to tangle with Mr. Romney earned her the respect of her journalism peers. Whereas challenging a Democrat—especially in the age of Mr. Obama—has sometimes been linked to disrespecting the office, standing up to Republicans is invariably seen as “speaking truth to power.” That dynamic was on full display at last night’s Republican debate in Detroit.

Fox News host Megyn Kelly had of course already engaged in a high-profile battle with the Republican front-runner, Donald Trump. Back in August during the first Republican debate, Ms. Kelly asked Mr. Trump a pointed (and to my ears fair) question about his past interactions with women and he responded aggressively, plus followed up in the ensuing days with gross suggestions about how she had “blood coming out of her eyes, blood coming out of her wherever.” Then he skipped the next debate that Fox hosted just before the Iowa caucuses.

That all seems kosher to me—and immensely fun to watch unfold.

But something happened last night that was way out of bounds and because I’ve yet to read a single accurate reflection on it, I once again wade into treacherous territory on an issue that the Observer knows better than any other outlet—the battle for narrative regarding Trump University.

Megyn Kelly said of the school, which has become a talking point for Mr. Trump’s opponents, “The rating from the Better Business Bureau was a D-minus. That’s the last publicly available rating.”

Mr. Trump replied, “It was elevated to an A.”

Then she proceeded to shush both Mr. Trump and Mr. Rubio, who was clearly delighted that Ms. Kelly was doing his bidding, as he’s made Trump University the centerpiece of his knocks on Mr. Trump.

She said, “Let me just set the record straight and then you can have at it.”

At this point, Ms. Kelly walked through the substance of the case, noting that there were 5,000 plaintiffs, and all the rest, even comparing Mr. Trump to Bernie Madoff and putting on screen an incendiary quote from the judge who certified the class action case for the Ninth Circuit. All of this is fine, if a bit over the top in its detail, considering that no other candidate was subjected to this kind of produced set piece (Mr. Trump also got the TV-clip mashup treatment that he missed when he skipped the last Fox debate).

But the problem is two-fold. First, Ms. Kelly appointed herself fact-checker here, exactly as Ms. Crowley had done four years ago. By correcting Mr. Trump in saying, “That’s never been publicly available,” she is no longer simply refereeing but awarding points, as well. Second, she’s wrong. And she had to have known it.

Just three days earlier, NBC News ran an extensive exploration of the “ratings” question. It was a fact-check piece based on Mr. Trump making the same “A Rating” claim on Meet the Press. In a story headlined “Better Business Bureau: Trump Right on ‘A’ Rating — Mostly,” NBC concluded that the rating did indeed fluctuate, as he indicated at the debate.

The story reads, “In fact, according to the rating agency, Trump appears to have undersold things—at times in the past, his ‘university’ had an A-plus rating.” It goes on to say, “But it’s not all good news for the Republican front-runner. The BBB’s ratings are ‘dynamic’ and are based on a constantly shifting algorithm, meaning they’re changing all the time. And over the years, the company’s rating had fallen as far as D-minus—an assessment Trump chose not to mention Sunday.”

Yet Ms. Kelly said that the “A Rating” had “never been publicly available.”

Naturally, the campaigns of Mr. Trump’s rivals ate it up. Just as predictably, the media quickly applauded Ms. Kelly’s acumen.

“Megyn Kelly is Donald Trump’s toughest adversary in GOP debate,” opined CNNMoney‎, while the Huffington Post wrote, “Fox News host Megyn Kelly may as well have been on the debate stage at Thursday’s Republican presidential debate in Detroit, because she wiped the floor with real estate mogul Donald Trump.” Salon delighted in how “Trump’s arch-nemesis strikes back” and “went for the jugular.”

But the question remains: Should debate moderators really be “wiping the floor” and “going for the jugular” with candidates? Even when—especially when—they’re wrong on the facts?

Every time this newspaper has written about Donald Trump in a way that can be interpreted as favorable, we’ve been subjected to the heckler’s veto of scorn and ridicule. I get that—our publisher is Mr. Trump’s son-in-law, and covering Mr. Trump was a challenge even years before he was running for president. But no one has covered the Trump University part of this campaign longer or in more depth than we have and I’m not going to let my betters in the media silence us on a topic we actually know more about than they do. No matter how many times The New York Times calls an ice cream store to ask about how often I come in and what flavors I get (because I’m such a grotesque walrus and won’t Twitter think that’s just delicious).

This morning on WNYC, frequent media tsk-tsker Brian Lehrer swooned over Ms. Kelly’s journalistic chops without ever noting that she had stepped over the line from referee to advocate and got a central fact wrong. His guest, Gabriel Sherman, who is widely viewed as having the best sources inside the bat cave of FoxNews, joined in the love fest, admiring Ms. Kelly’s prosecutorial instincts honed from her former job as a corporate lawyer. The two journalists disagreed on some other topics—Mr. Lehrer thinks a Trump nomination would be a “suicide mission” that will create an effective GOTV program for Hillary Clinton while Mr. Sherman thinks Mr. Trump’s unique campaigning style will give her fits. But when it comes to Megyn Kelly, there is no dissent. So long as she is attacking Donald Trump, regardless of the accuracy of her attacks, she can do no wrong. 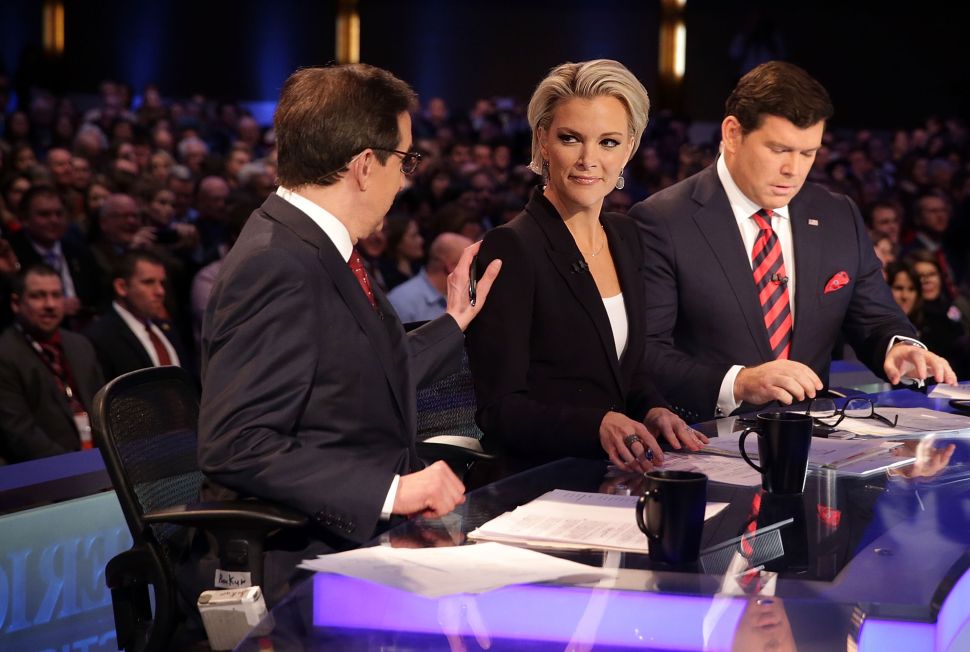