An evening honoring Dick Wolf was the perfect time to chat with some of the key players who inhabit Wolf’s world, which consists of his the current four (!) shows his Wolf Films has on the air – Chicago Med, Chicago Fire, Law & Order: SVU and Chicago PD.

Here are some of the tidbits the players, and Wolf himself, were willing to offer.

Expounding on his character, an emergency room psychiatrist, Platt was quick to explain that he and the writers are acutely aware that mental health problems can’t be solved in a mere 42 minutes, saying, ”I think we’re doing a really good job of showing that this is more about diagnosing what needs immediate attention in these patients and then getting the help they need. Mental health issues are extremely important to talk about and deal with because they’re real world problems, so I’m very glad to be in this role, telling those types of storles.”

DeVitto says that she’s proud to play a working single mom to a newborn on Med, explaining, “Natalie’s husband was killed serving in the military. There are a lot of families who’ve lost a loved that way, a lot of women raising kids on their own because their spouse was defending someone’s freedom. I don’t think this kind of household gets enough attention so I’m really happy that we’re talking about and showing this type of family.”

As he portrays Lieutenant Casey, Spencer reveals that he’s on a ‘need to know basis’ about what’s in store for his character. “It’s not that anyone is keeping anything from me really, it’s just that they don’t want me, or any of the other actors, to play to what’s ahead. It really needs to be that way so that I’m truthful to the character and those emotions. I’m good with it because I want to be reacting to what’s happening to my character right now, not to something that’s going to happen in the future.”

Kinney admits that he’s changing personally as he’s playing Severide, saying, “I was watching Monica Raymund [who portrays firefighter Gabriela Dawson] as she was doing an interview and I think she put it really eloquently when she described how we each really grow with our character. A lot of our lives goes into this work and sometimes that line between us and our characters gets blurry. When I really look at it, I know that there’s a lot of myself in Severide and a lot of him in me.”

The seasoned veteran, having been on SVU for 17 seasons now, Ice-T says that he couldn’t have imagined all those years ago that he’d be doing this work for this long. “It sort of blows my mind that I’m still on the same show, but that’s fine with me ‘cause I’m happy. I’m not just bullshitting about that. I really am happy. But the real thing is, every time I think I got it all down with what I’m doing on the show, something happens that makes me go, ‘ah hell, I didn’t know that, that’s something different, but I got it.’ And, what’s cool about that is that’s the way real life is – you think you got it all going on and then there’s a curveball and you deal with it. I love the realness of that on our show. Oh, and I love my paycheck too,“ he said as he laughed (and flashed that awesome smile of his!)

As Detective Erin Lindsay, Bush knows that she has a certain responsibility playing a strong female. “If young women are watching, and I really hope they are, then, yeah, we definitely want them see that Lindsay, and other women on the force, like [Sergeant. Trudy] Platt and [Officer Kim] Burgess, are capable of being really strong while still maintaining their femininity as well. I think we accurately show that women on our show are treated as equals by their male co-workers and that many women hold positions of authority within the law enforcement community. If that makes any woman understand that she can hold her own and even lead in any workplace she chooses, I think that’s awesome and that we’re clearly doing things right.”

“I know some people question the methods of [my character, Sergeant] Voight and some think of him as a bad guy, but I never have,” admits Jason Beghe. “The thing is, he behaves the way he thinks he needs to in any given situation. If you look at someone’s behavior in a situation from a specific viewpoint you can pigeonhole them into anything. What’s great is that I get to show all sides of him. The way I think about Voight is that – to steal from Picasso – he paints the picture to find out what it looks like.”

Wolf explained a bit about his philosophy concerning his series, saying, “We’re the company that builds Mercedes, not Ferraris, in the sense that I loved Breaking Bad but it ended after 65 or so episodes that were played out over the course of several years. We’re doing 87 hours of television this year alone.”

Merkerson, who also worked with Wolf on the original Law & Order for many years, summed up the Wolf brand of content very succinctly, saying, “You sit down to be entertained but when you get up you’ve been educated and you want to talk about what you’ve seen.”

Wolf mentions that he’s often asked if he’s fearful of running out of stories to tell. “To that I say, ‘Don’t you get a paper every morning?’”

Wolf mentions that he’s often asked if he’s fearful of running out of stories to tell. “To that I say, ‘Don’t you get a paper every morning?’”

He tells of selling the original Law & Order series to then NBC president Brandon Tartikoff. “When he picked up the show he said, ‘what’s the bible of the show,’ and I said, ‘the front page of the New York Post.’ That’s still true. You can’t make this stuff up. The best stories come out of real life and real people.”

Summing up his career, Wolf gushed, “I would not trade what I do with anyone on the planet. I get to work with incredibly talented actors, writers, and producers. This has been the best life as far as I can see that anyone has had in this medium. Above all, it’s been incredibly gratifying and I just don’t think you can ask for anything more than that.”

Chicago Med airs on Tuesdays at 9/8c, followed by Chicago Fire at 10/9c.

All series are on NBC. 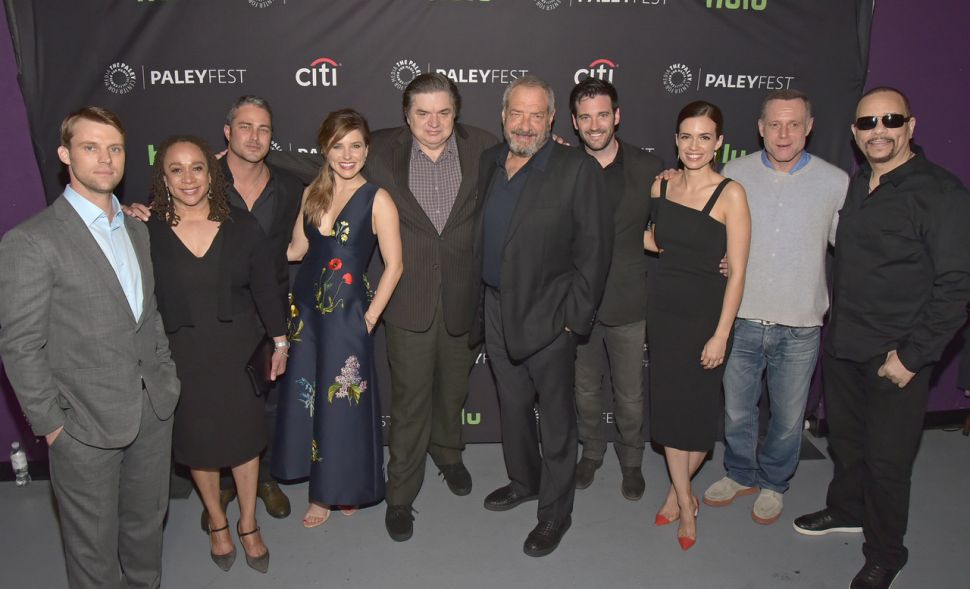