Last week, Chet Baker got the ax. This week, another legendary jazz trumpeter goes to the Hollywood gallows. Actor-turned-director Don Cheadle trashes the historic career of Miles Davis in Miles Ahead, named after one of the greatest albums ever made by one of the most influential musicians of all time. The full force of his impact on the world of music has never been fully documented; the impact of this sleazy and preposterous biopic will be as mercifully temporary as last week’s pop list on the Billboard chart.

Unlike Bird, the wonderful Clint Eastwood film about Charlie Parker, Mr. Cheadle’s take on Davis eschews anything linear in narrative, jumping all over the place in disconnected time frames, and everything honest or realistic in fact, turning the character of Miles into a violent, thieving, drug-addicted, gun-carrying, wife-beating criminal. If the real Miles Davis had done all of the vicious, anti-social, life-endangering stunts depicted in this fairy tale, he would never had time to perfect the genius on display in albums like Sketches of Spain and Porgy and Bess. The action takes place during a five-year career hiatus in the late 1970s when his career was basically washed up, but Davis was contemplating a comeback between addictions to heroin (which he replaced with legally prescribed methadone) and cocaine (which he eventually kicked). For most of the movie, he mopes around reclusively in his apartment on West 77th Street, which is often a combination setting for wild sex parties and drugs. Because he loved fancy clothes and collected guns, the movie has plenty of both, but to my knowledge there is no evidence that he ever waved them around to threaten cops, fans, fellow musicians or the executives at Columbia Records, who are depicted as gangsters and felons. (This would have come as a big shock to Columbia titans like George Avakian and John Hammond, who catapulted Davis to stardom and nurtured his complex career without firearms.) The screenplay, co-authored by Mr. Cheadle and Stephen Baigelman, opts for an unconventional, unauthorized pop-tempo portrait of Davis saturated with hyperbole and innuendo—on one hand, he’s a sensitive and creative artist who revolutionized jazz, on the other, a wild, explosive, temperamental and self-destructive dope addict capable of murder without blinking an eye. According to the jazz musicians I know, he was unpredictable and borderline crazy, but nothing like the moody, unhinged and dangerous stray bullet depicted here.

There is no mention of the great actress Cicely Tyson, the sanest of the women in his turbulent private life who married him and survived. Instead, the emotionally and physically scarred wives and lovers in his file have all been collated into one fictional character—a dancer called Frances (well played by beautiful, talented Emayatzy Corinealdi). She gives up her own career for him, and gets a sock in the jaw in return. But the sequences are all mixed up. Frances was his first wife, but the action is set in 1979, and her marriage to Davis ended 10 years earlier. The chronological order is a mess. So is everything else. Cameo appearances are made by actors who appear briefly as Bill Evans, Herbie Hancock and Gil Evans, who arranged the most famous and creative Miles Davis recording sessions, but they were over and history by 1979. The focus is on an imaginary writer for Rolling Stone, played by Ewan McGregor, who breaks into Davis’ house to pen his comeback story and becomes his chauffeur after connecting the broke musician with a coke dealer who makes up the difference in money owed in exchange for autographing his LPs. Mr. Cheadle is a riveting actor. He masters Davis’ craggy, beat-up voice and even looks like he is actually playing the trumpet, but as a director, he sees Miles Ahead as free-form jazz—an experiment that loses its timing in high-altitude style that never quite works. The running thread about his disintegrating marriage is intercut with his frantic (and irrelevant) gun-blasting attempts to retrieve the master tapes of a recording session Columbia wants to release without his permission. The camerawork plays leapfrog with the narrative.

If Miles Davis the horn player is an idol, you can see this movie and still be a fan of his masterpiece recordings. But if you want to know what he was like as Miles Davis the man, you won’t learn a thing from Miles Ahead. 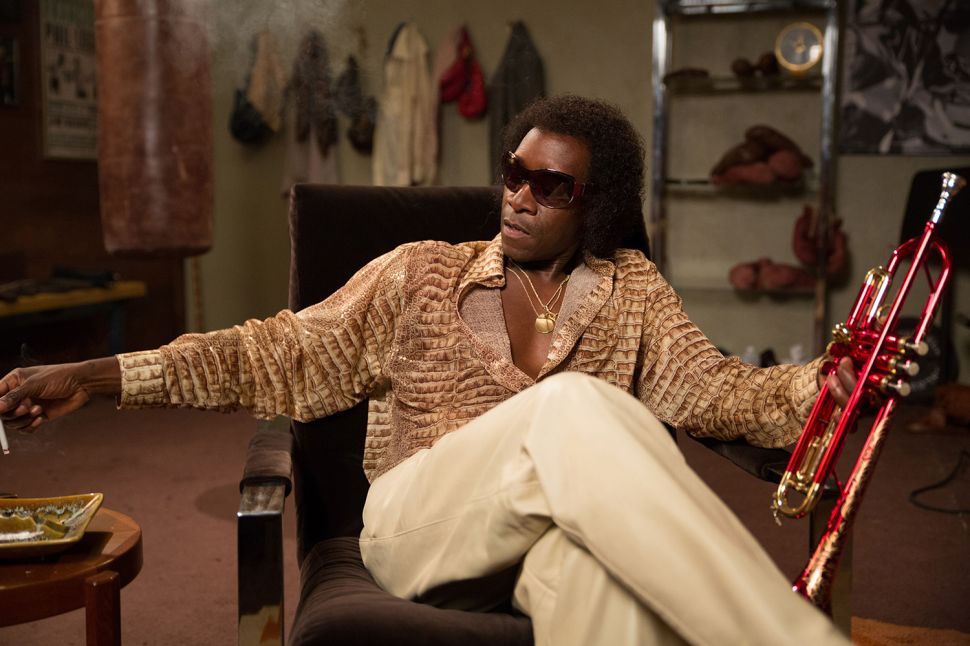