Mitt Romney has begun to execute his devious and long term plan to seize the GOP nomination by defeating Donald Trump and keeping power in the hands of the Republican establishment.

Mr. Romney’s shrewd and cunning plan could work, but more likely it will backfire badly. Mr. Trump’s nomination is far from certain but he remains the most likely candidate to win the GOP nomination. If he receives more delegates than any other candidate but the GOP establishment manipulates the voting at the convention to give the nomination to Mr. Romney or another candidate, Mr. Trump and his supporters will be furious, walk out of the convention, leave the GOP and form a third party to run in November.

When I refer to the Romney strategy as devious and long term, here is what I mean:

If you google the words “Budowsky Romney” you will find a series of columns, mostly in The Hill, where I alerted my readers to what I believed to be Mr. Romney’s secret plan long ago.

At the very moment he announced he would not run for president, I wrote piece for The Hill on January 30, 2015 titled “What Romney really did today.” In that piece I suggested Mr. Romney always planned to be nominated and.elected president in 2016, and that his “withdrawal” was really a clever tactical move to allow Jeb Bush to receive all of the scrutiny and attacks—and then, when Mr. Bush fell as Mr. Romney calculated he would, step in to pick up the pieces with a revived Romney candidacy.

Mr. Romney is not a very good poker player. I noted at the time he “withdrew” that he did not issue a Sherman statement saying he would not under any circumstances run in 2016. That is not what he said; that was not what he did.

If you follow the trail of the “Budowsky Romney” google you will find a string of columns in The Hill tracing the trajectory of Mr. Romney’s various maneuvers towards his ultimate goal of positioning himself to receive the 2016 GOP nomination.

Fast forward to this Wednesday, when Mr. Romney came out of the weeds and launched a verbal barrage of personal and political attacks against Mr. Trump. What did Mr. Romney say? He offered a long list of arguments about why Mr. Trump is not honest, why he is not worthy of the presidency, why a Trump presidency would endanger American security, and so forth. What did Mr. Romney not say? He did not say he is running for president and he did not support any of the candidates who are running!

The Romney scheme is likely to fail for several reasons.

In Mr. Trump’s latest ploy to grab the presidency Mr. Rubio, Mr. Cruz and Mr. Kasich are nothing more than pawns on the great Romney chessboard. They will continue to attack Mr. Trump in debates such as the latest mud wrestling match hosted and well managed by Fox News. These attacks against Mr. Trump will take their toll and further erode Mr. Trump’s numbers in match-up polls against Hillary Clinton and Bernie Sanders, where he lags behind them both regardless of his claims otherwise, while Mr. Romney will soon be included in match-up polls and where he calculates that he will far outperform Mr. Trump in hypothetical match-ups against Ms. Clinton and Mr. Sanders.

The above elements of the Romney plan may come to pass but he is too clever, cunning and shrewd by a half. Here’s why:

I have recently been a regular guest on News Max TV, which I heartily recommend for serious analysis of the campaign. My point during the NewsMax TV shows was that the media dramatically overhyped Super Tuesday, which would turn out to be only marginally important, with the real action beginning with voting on March 15. Until March 15 it was and is ludicrous for analysts on political television to repeatedly suggest that Mr. Trump is “unstoppable” which they regularly did, and do.

The fact is that at this moment Mr. Trump has won more delegates than any other candidate, but he needs to win close to another 1,000 delegates and is nowhere near locking up the nomination. Any pundit who says otherwise is committing media malpractice.

Mr. Romney’s strategy for the coming days and weeks is for Mr. Rubio to win the Florida primary and Mr. Kasich to win the Ohio primary. This would effectively prevent Mr. Trump from making decisive gains by March 15, and prolong media scrutiny of Mr. Trump and negative attacks against him by Messrs. Rubio, Cruz and Kasich. In the Romney scheme the candidates would continue to divide up delegates and the candidates would ultimately enter the Republican convention with Mr. Trump leading but without a majority of delegates in which case a deadlocked convention, fixed by the establishment, would turn to the statesman—Mr. Romney—to win the nomination!

The Romney scheme is likely to fail for several reasons.

First, Mr. Trump’s immediate counter-move is to pour money into the Florida primary to attempt to defeat Mr. Rubio and knock him out of the race. The polls show that Mr. Trump currently leads Mr. Rubio in Florida. While the Florida primary could ultimately go either way, the Trump Florida counter-move has a fair chance of working, which would lower though not eliminate the chance of a brokered GOP convention.

Second, Mr. Trump could make a deal (where have we heard that before?) to team up with one of the other current candidates to form a ticket. If a Trump-Cruz, Trump-Rubio or Trump-Kasich ticket would create a majority of convention delegates that would foil Mr. Romney’s scheme. Don’t be fooled by the mudslinging between the candidates in the debates and note that Messrs. Cruz, Rubio and Kasich all said in the Thursday debate that they would support Mr. Trump (even if some other Republicans might not) if he is nominated.

Third—and this is critically important: In an election year where political establishments are as popular as the bird flu and a GOP facing an angry hostility against the Republican establishment in Washington, it would create immense and uncontrollable anger and rage from Trump and his supporters if the convention was fixed against the candidate who won more delegates than any other candidate—in favor of Mr. Romney or any other certified candidate of the establishment who did not even run in the primaries.

If the Romney scheme succeeded the inevitable result would be that Mr. Trump would run as a third party candidate and, one way or the other, continue the GOP nightmare until election day! 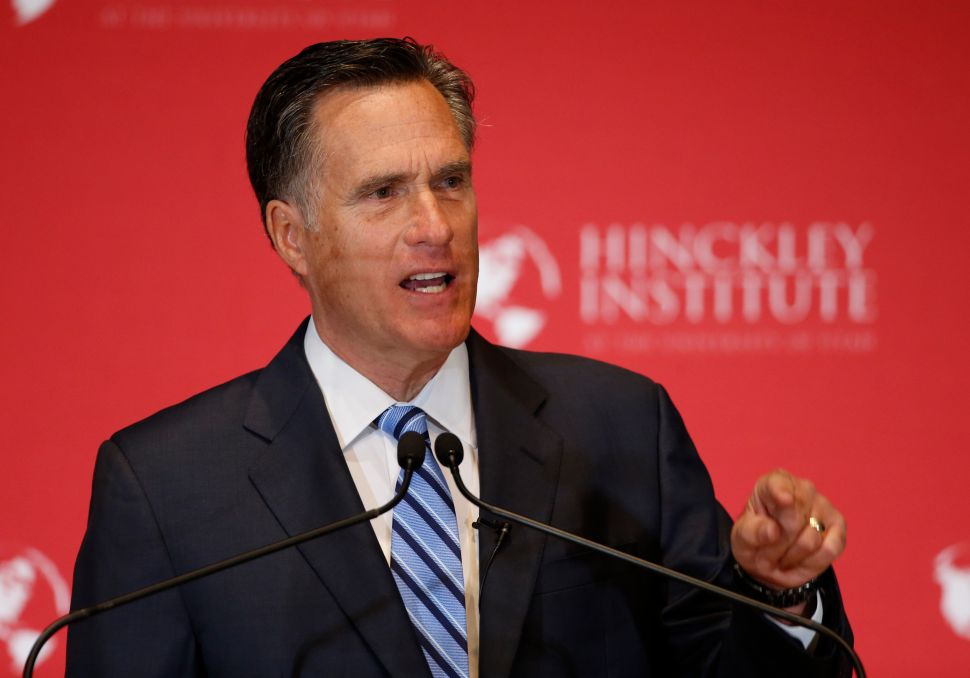