In the late-’60s and early-’70s, Marcel Broodthaers was about as different as you could get from mainstream art making—generally understood as formalist painting and sculpture.

So his artwork had to worm its way into various lives through auxiliary routes.

And there were many. As a published poet who only turned to art making in his 40s, Broodthaers was admired by other poets for his freethinking, mold-breaking approach to the craft. Activists are drawn to the guttural stance his art took against his home country, Belgium, and its colonial policies in Africa. And museum and arts administrators adore him for the way he elevated their discipline after subsequently quitting art to found what he called the Musée d’Art Moderne, Departement des Aigles (Museum of Modern Art, Department of Eagles), a museum-cum-artwork that he operated between 1968-1972.

All of these made Broodthaers a tertiary character in the art world—one who followed his compulsive interests in poetics and politics to unique and beautiful ends.

So for this show to materialize in the original church of macho American Abstract painting is quite a feat. It would not have been possible without Broodthaers’ wife, muse and biggest fan Maria Gilissen, who aside from carefully preserving his archive, was the inspiration behind the destitute poet’s turn to fine art (it’s said that Broodthaers made the move with the hopes of earning more money to support his young family).

The retrospective, which opens in theatrical fashion with a lobby full of potted palms (Broodthaers’ signature icon for Belgium’s early to mid-20th-century colonial profiteering of Africa), is ironically a perfect fit in MoMA’s chic snaking galleries, which were designed with large-scale abstract paintings in mind. Perhaps it was his aforementioned museum homage that endeared him to these curators, or, conversely, his earnest interest in museums that made his work ideal for institutional showcase. Either way, the collection on display gorgeously outlines postmodern art practice as we now know it, while simultaneously documenting Broodthaers’ lifelong screed against colonialism and nationalism. If nothing else, he was always a conscious objector.

As you enter the exhibition you first pass through a darkened room full of Broodthaers’ encased pre-Contemporary art poetry, which was heavily influenced by the visually oriented poet Stéphane Mallarmé, before the room opens into a brightly lit gallery holding Broodthaers’ earliest artworks. His legendary first sculpture doubled as a dramatic last gasp as a poet: The last 50 copies of his collected poetry, titled Pense-Bête, semi-submerged into plaster. This work is encircled by a suite of other early works, each one more powerful than the next.

Objects decorated with mussel shells (including a stunning tondo titled Cercle des moules (Circle of Mussels), 1966), eggs and coal—all of which Broodthaers sourced from a local restaurant—became simple visual puns on Belgium’s suffocating heritage (mussels and fries, for instance, is Belgium’s national dish, while “Moule” is also French for “Mold”). The works are rife with associations to Catholicism and, of course, colonialism and predate even the groundbreaking “non-site” material works of iconic American artist Robert Smithson, which were some of the first 20th century artworks to display raw materials as narrative.

One room contains many of the artist’s photographic canvases—a subtle jab at traditional painting and Broodthaers’ attempt to push poetic verse further into a spatial art form. Also in this room is Un coup de dés jamais n’abolira le hassard (A throw of the dice will never abolish chance), 1969, an abstracted and mechanical engraving of Mallarmé’s poems, which replaces paper and ink with engraving on aluminum and words with black rectangles. The result is a suite of alluring objects that echo modern poetry but also conjure up thoughts of both the editing process and censorship (all with a wry nod to Minimalism).

A larger room later in the exhibit holds the works from Broodthaers’ Musée d’Art Moderne, Departement des Aigles years: a stunning 12-part rumination on history as viewed through bureaucracies. This sprawling and unprecedented art practice, which lasted for four years, resulted in an enormous output of documents, letters, projections, placards, objects and room-sized installations by Broodthaers, which became (for better or for worse) the blueprint for late 20th century conceptual art making. The Belgian’s wall of vacuum-formed plastic signage from the late ’60s is particularly appealing: a mash-up ranging from Matissean shapes and iconic Surrealist imagery to poster logos and typefaces.

But the coup de grâce of this exhibition is the installation of Broodthaers’ Décors: a series of room-filling, found-object installations that followed the closing of his museum. The most powerful of these works, titled Décor: A Conquest by Marcel Broodthaers, from 1975, is recreated in full and stands as his most compelling rejoinder to Europe’s most objectionable policies.

The masterwork was described by the artist himself as exposing “the relationship of war to comfort” and is broken down into two distinct rooms: Salle XIXe Siecle and Salle XXe Siecle. The larger XIXe room is a parody of nationalism that mixes spectacles of war, such as cannonry on AstroTurf, with traditional symbols of Edwardian luxury, like the elegantly twisting candlesticks that ring the room. Elements of exoticism are also intermixed within this comical “hometown” display of might, such as a central bronze sculpture of a slithering African python rearing upward and some of the fruits of efforts abroad: barrels of imported spirits (Rum and Gin). The XXe room functions more as the opposite: a dissection of “the adventure hero” who brings the comforts of the first world with him while conquering “uncivilized” lands. Here, we see summer patio furniture and a farcical Battle of Waterloo puzzle encircled by an array of handguns and rifles that both protect stolen spoils and subdue opposing interests.

Broodthaers’ overtly political though hardly heavy-handed tone is something that is far too often missing in the work of younger conceptual artists, who are either mired in their own (real or imagined) personalities or are relegated to politicization so overt that their work amounts to little more than illustration. Broodthaers was indeed a personality, but his personality was merely a symptom of his curiosities and desires to communicate poetically via whatever medium moved him at the time. The difference is engaging an audience versus coddling an audience—two acts that couldn’t be more different. 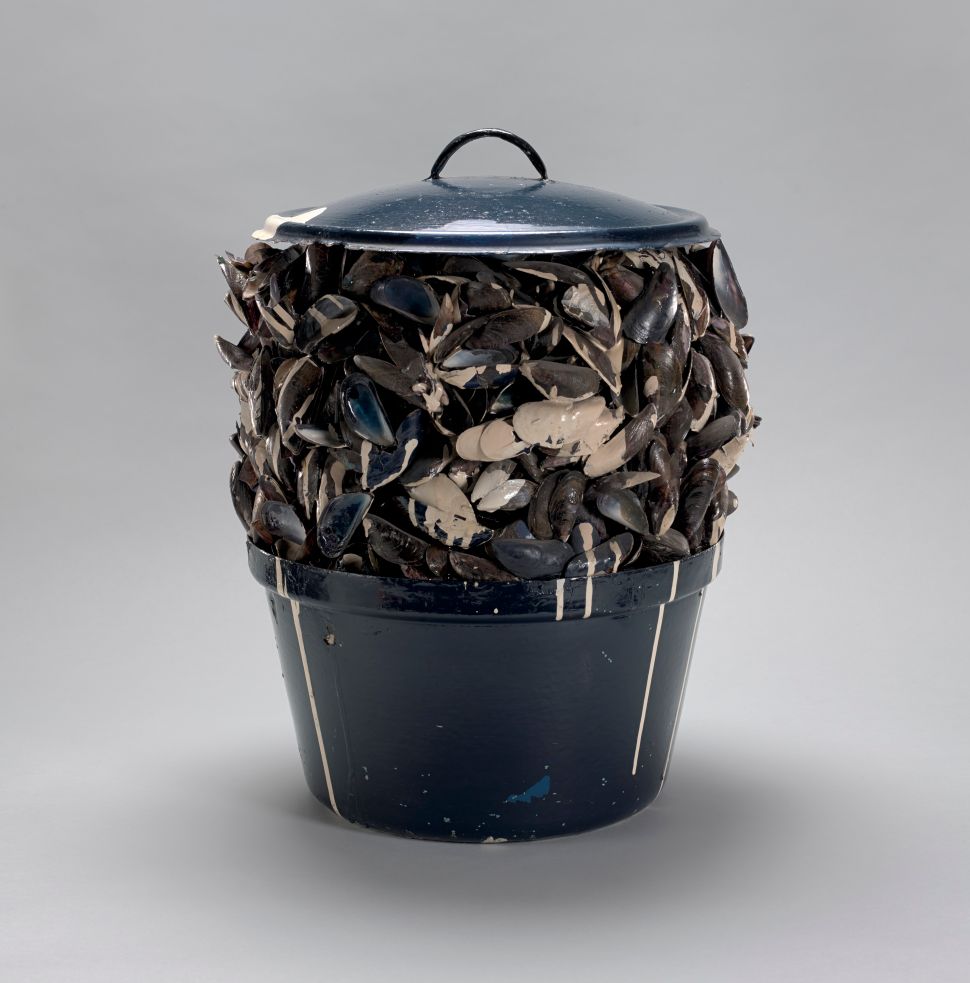