America has reached a point where political discourse is close-to-impossible. Nowhere are our views as immutable as on the issue of guns. From one perspective, guns are an enormous social harm that must be relegated to trained professionals and law enforcement. In this context, the stigmatization of guns is a wise one. A population that is comfortable around guns is a population that is comfortable using them—and sometimes using them on innocent people. Therefore, the number of guns held by the general populace should be driven as low as possible (and, hopefully, eliminated entirely). Australia, Australia, Australia.

The other perspective is the complete opposite. Guns are what keep communities safe, either from criminals or (God forbid!) government overreach. Gun-free zones are invitations for madmen and terrorists to attack a population that is advertising its defenselessness. Guns are what freed this country from the British, have stopped many would-be assailants, and are a constitutionally protected right not up for discussion. Heller, Heller, Heller.

It would seem any consensus is impossible. Depending on one’s perspective, “common sense” gun legislation is either virtually nothing or an effective ban. It looks as if the gun argument will therefore go on indefinitely. But that needn’t actually be the case, for not all laws are created equal.

When FDR shepherded Social Security through Congress, he knew very well that the program was there to stay. As he put it in 1941, “We put those pay roll contributions there so as to give the contributors a legal, moral and political right to collect their pensions and their unemployment benefits. With those taxes in there, no damn politician can ever scrap my social security program. Those taxes aren’t a matter of economics, they’re straight politics.” By 1952, FDR’s archenemy Herbert Hoover was opining in his memoirs that, “The broad objective in this act was meritorious.” Part of Social Security’s permanence is of course due to its popularity. But another aspect is due to its complexity and pervasiveness. Due to its structure, as FDR understood well, it would be almost impossible to undo.

Let’s contrast this with another law of the period: Prohibition. While enacting Social Security Act took only a simple act of Congress, repealing Prohibition faced a far greater hurdle. The Eighteenth Amendment took two-thirds of Congress and three-quarters of the states to ratify it to become law; repealing it would involve the same huge majorities. As Senator Sheppard famously put it at the time Prohibition was enacted, “There is as much chance of repealing the Eighteenth Amendment as there is for a humming-bird to fly to the planet Mars with the Washington Monument tied to its tail.” Sheppard had a point; no Constitutional Amendment had ever been repealed. To undo Prohibition would be a legislative act literally unprecedented in American history. Yet fourteen years later that humming-bird reached Mars nonetheless, ending the Prohibition experiment.

One would think it would be far easier to repeal Social Security than to repeal Prohibition. An amendment is far more durable, in theory, than a simple law. But in practice, that’s not how things work. A law’s permanence is not merely a function of its popularity.The left understands this very well—and the right is increasing coming to appreciate this as well.

In September 1993, President Clinton pressed Congress to make its most urgent priority the giving to every American of “health care that can never be taken away.” We saw this again during the Iraq War. Despite the overwhelming public reaction against it, the Bush administration doubled-down and stayed the course. And of course the Republicans warned of instant permanence during the Obamacare debate. As Chris Cilliza put it last year, “the longer the law is, well, the law, the harder it becomes to drastically change it.” In other words, a permanent law is one that can neither be repealed popularly nor practically.

Obamacare is the perfect model for Republicans to follow to settle the gun issue once and for all. Using the same legal reasoning as the Affordable Care Act, pro-gun legislators can win this war by pushing for an individual gun ownership mandate. Such a mandate can be from the top-down, a Federal mandate. Or, like Romneycare, it can be instituted on the state level first—West Virginia, here’s looking at you. We’ve seen this happen recently with this very issue. At first, concealed carry laws were only allowed in certain states. Now, all fifty states allow for such licenses. A gun-ownership mandate could play out the same way.

There’s a reason Steven Spielberg digitally edited guns out of E.T. For “gun safety” advocates, the law is not enough. It’s far better to stigmatize gun ownership and render it taboo, in one of the myriad ways that progressivism reveals itself to be domestic imperialism. “The White Man’s Burden” remains unchanged, but now it is those who are poorer and whiter who are in desperate need of civilizing. The gun-owner culture is allegedly primitive and dangerous, and it falls on “right-thinking” people to show them the error of their ways. As Charles Cooke pointed out, years ago rifle clubs in high schools were par for the course. Now, metal detectors promote the idea that having guns nearby is something every child should fear. The only way to permanently stop this is to create a nation where guns are as ubiquitous as Coke.

Conservatives have both the context and the pretext to pass such a law. Many of the early colonies mandated gun ownership, granting the historical basis for action that right-wingers love. The cost for voting for such a bill—being labeled a “gun nut”—has already been paid by any such politician. And with the rise of terrorism, one can easily make the case that a disarmed populace is a luxury we can no longer afford. Jesse Hughes, the lead singer of Eagles of Death Metal, made the case for wider gun ownership better than any NRA official ever could.

The process is flexible. States can offer subsidies for women (and men) who have been the victims of assaults, giving them a tax credit or voucher in order to purchase a gun and take a training course. In the same way that Obamacare prescribes a “tax” for not purchasing insurance, so too can those opposed to gun ownership simply pay a fine to keep their consciences clean. Cities would come under enormous pressure to liberalize their gun laws, lest all the citizens (overwhelmingly Democratic voters anyway) have to pay a stiff fine. The genie would be out of the bottle, and could never be put back in. In any case, it would not be very long before gun ownership is culturally the norm throughout the entire United States—and it would become a norm “that can never be taken away.” 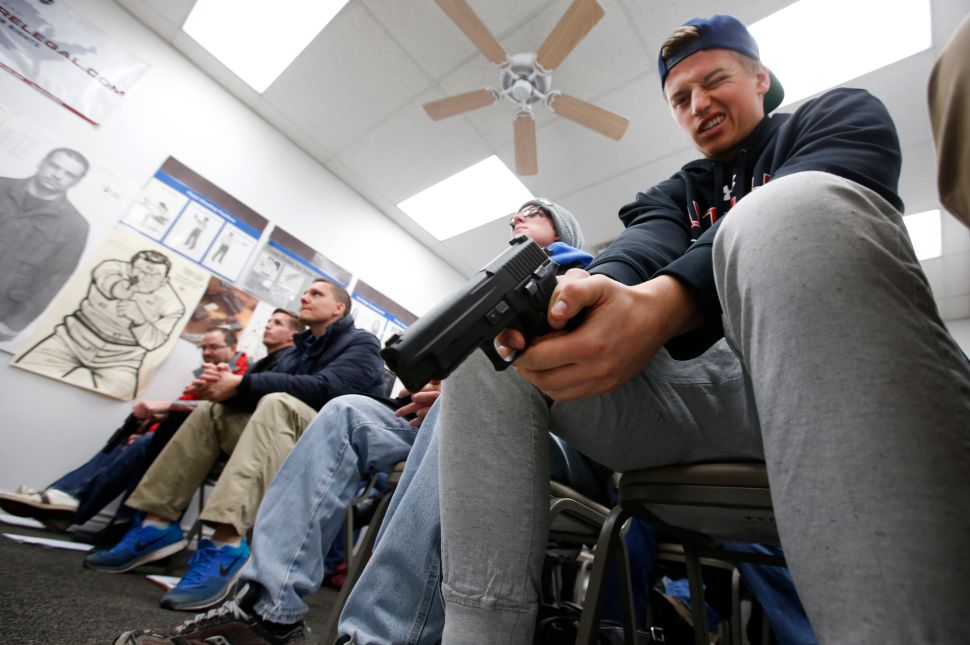