NASA has slated the next supply run to the International Space Station with Hawthorne, California-based launch provider, SpaceX. The mission will mark the return of the Dragon spacecraft to operation after it was destroyed when the Falcon 9 rocket exploded during SpaceX’s last attempt at delivering cargo to the orbiting laboratory.

This upcoming launch, Cargo Resupply Services Mission 8 (CRS-8), will be the eighth contracted mission to be carried out by SpaceX under NASA’s Commercial Resupply Services contract and will liftoff no earlier than 4:43 PM ET on Friday, April 8th from Launch Complex 40 at Cape Canaveral Air Force Station in Florida.

The SpaceX Dragon will be flown to orbit on the company’s Falcon 9 rocket and carry over 4,400 lbs of scientific research, perishables, and hardware to the Expedition 47 crew. “This is a launch that we’ve been waiting quite some time for because it’s really important to our overall ISS research program,” said Chief Scientist for the ISS program at NASA’s Johnson Space Center, Julie Robinson, during a teleconference on Monday. “SpaceX is a workhorse for us.”

Along with over 280 investigations, the mission will also include the transport of the experimental Bigelow Aerospace expandable habitat module that will be attached to the ISS for testing and could serve as a future living space for astronauts. Following delivery of these items, the Dragon will remain birthed to the space station until May when it will be released and returned to Earth carrying biological material collected during Scott Kelly’s year in space.

CRS-8 will be the ‘return to flight’ of the Dragon spacecraft and comes nine months after it disintegrated when its launch vehicle, the Falcon 9, exploded en route to the space station during CRS-7 on June 28th 2015.

The catastrophic failure of that mission resulted in the total loss of over 4,000 lbs of food and supplies bound for the crew of the ISS. Microsoft’s Hololens technology and an experiment by a team of 8th graders who intended to study composting using live worms were also destroyed.

SpaceX called the explosion—which occurred 2 minutes and 30 seconds after launch—an “unauthorized rapid disassembly of the airframe” following a “flight anomaly.” The explosion—which was caused by a failed strut interfering with the fuel tank—came as a surprise to many as SpaceX had successfully launched the Falcon 9 rocket 18 times.

The mishap grounded SpaceX and put a pause on the 1.6 billion dollar, 15 mission Cargo Resupply Services contract with NASA.

SpaceX’s return to spaceflight using their Falcon 9 came six months after the CRS-7 failure and followed the completion of an internal investigation that led to some upgrades on the rocket. That ‘return to flight’ mission, ORBCOMM-2, would end up making history not only for the company, but for the entire aerospace industry.

On December 21st 2015, after SpaceX successfully launched 11 satellites to low-Earth orbit for communications provider ORBCOMM, the company returned and landed the spent first-stage of the Falcon 9 on Landing Zone 1 at Cape Canaveral Air Force Station—ushering in a new era of reusable rockets and sustainable space exploration.

This has always been the goal of SpaceX CEO Elon Musk, who believes that reducing the costs of rocket technology will push the industry forward and pave the way for a human colony on Mars—the long-term vision of SpaceX. “If one can figure out how to effectively reuse rockets just like airplanes, the cost of access to space will be reduced by as much as a factor of a hundred,” Musk said last year.

Since the successful return of the Falcon 9 to a ground-based landing platform, SpaceX has attempted to land the 14-story tall rocket multiple times on autonomous drone ships off the coasts of Florida and California but failed each time. The last attempt was made during the SES-9 mission earlier this month even as the company expressed doubts about a rocket landing prior to the launch.

Rocket landed hard on the droneship. Didn't expect this one to work (v hot reentry), but next flight has a good chance.

That next flight Musk referred to will be Cargo Resupply Mission 8 but it’s unclear if SpaceX will attempt another drone ship landing or opt for a second touchdown at Landing Zone 1.

While another rocket landing would be great for SpaceX and the industry as a whole, it’s crucial that the company’s Dragon spacecraft return to ferrying supplies to the ISS not only for the sake of the crew aboard the space station but for SpaceX to continue on as a pioneer in the commercial space industry.

Back in 2012, the SpaceX Dragon became the first commercial spacecraft to deliver cargo to the space station and return to Earth intact. That mission was also the first time any commercial company used a spacecraft to reach the ISS.

History will (hopefully) continue to be made by SpaceX under a recent commercial crew contract awarded by NASA that will see the successor to the Dragon—the ‘Crew Dragon’—ferry American astronauts to the orbiting laboratory. 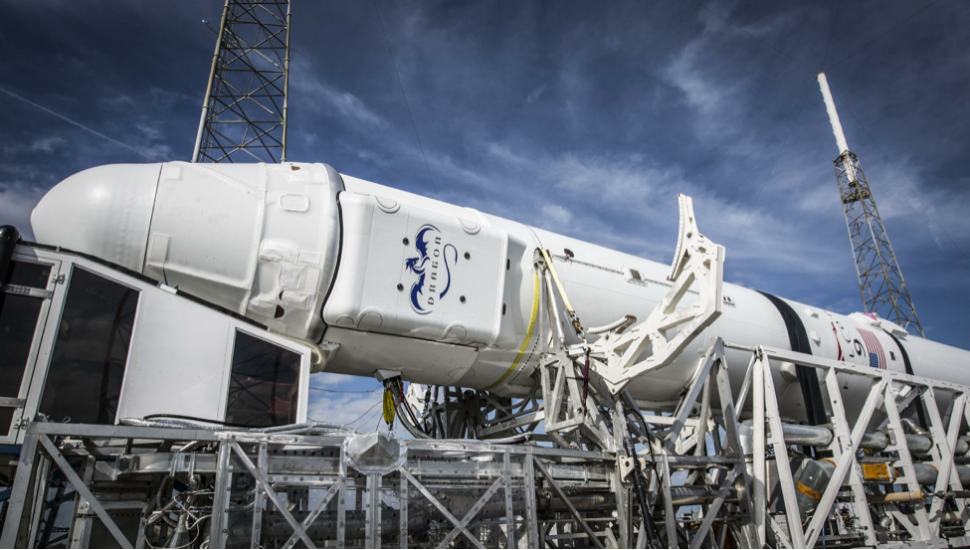