New York City Mayor Bill de Blasio said today that the city is in a “high state of vigilance and readiness” after deadly terrorist attacks at airports and subways in Brussels today—even as the federal government seeks to cut New York’s anti-terror funding.

“There is no specific and credible threat to New York City at this time,” Mr. de Blasio said this morning at 1 Police Plaza, “but we are in a high state of vigilance and readiness because of the investments we have made in building a strong anti-terror capacity in this city.”

Mr. de Blasio, Police Commissioner Bill Bratton and other top NYPD and FBI officials described today a nearly immediate response to the attacks in Europe, where the death toll now stands at 34, beginning with an alert around 3:30 a.m. New York time.

“I was awakened by John Miller,” Mr. Bratton said of his deputy commissioner for counter-terrorism, “that very familiar phone call in the middle of the night.”

But the city’s response began before Mr. Bratton was even awakened, he said, calling the NYPD a “well-oiled machine.” The attacks came about an hour before a shift-change for the NYPD’s counter-terrorism unit, and the department made the decision to keep those officers on duty to add more capacity to the next shift. The officers, along with the Strategic Response Group, have been posted in the city’s transit system and other high-profile spots, and Mr. Bratton recalled seeing officers with long-guns on a subway ride he took this morning on the Lexington Avenue line down to City Hall.

“Looking across the platform for the uptown train there were additional SRG officers getting ready to board the uptown train,” Mr. Bratton said of his arrival. “That degree of coverage will continue.”

In addition to officers on mass transit—as well as the presence of military and officrs from the Port Authority, MTA and other state agencies—Mr. Bratton said a new 55-person unit would begin patrolling the subway stations underneath Time Square today.

But the officials also pointed to another reason the city was so prepared to fight terror: funding from the federal government in the form of Urban Area Security Initiative grants, which President Barack Obama is currently proposing slashing in half.

“I don’t think it’s fully understood just how dependent we are on the federal government and the funding they have provided since 9/11: billions,” Mr. Bratton said.

That money has helped create the city’s massive domain awareness system, a surveillance network that reads license plates and scans for radioactive material in the city. Mr. Bratton called the system “literally the brains behind” the city’s counter-terrorism response and strategy, and said it runs on $50 million in federal funding each year..

“We will continue our federal discussions and we will remain optimistic that especially in light of what’s going on in the world today, that these cuts will be restored,” Mr. Bratton said.

Mr. de Blasio noted the money was being put to good use, and that the NYPD’s efforts was the reason the city has not seen a terrorist attack since September 11.

“It’s not because people weren’t trying,” Mr. de Blasio said. “They were trying.” 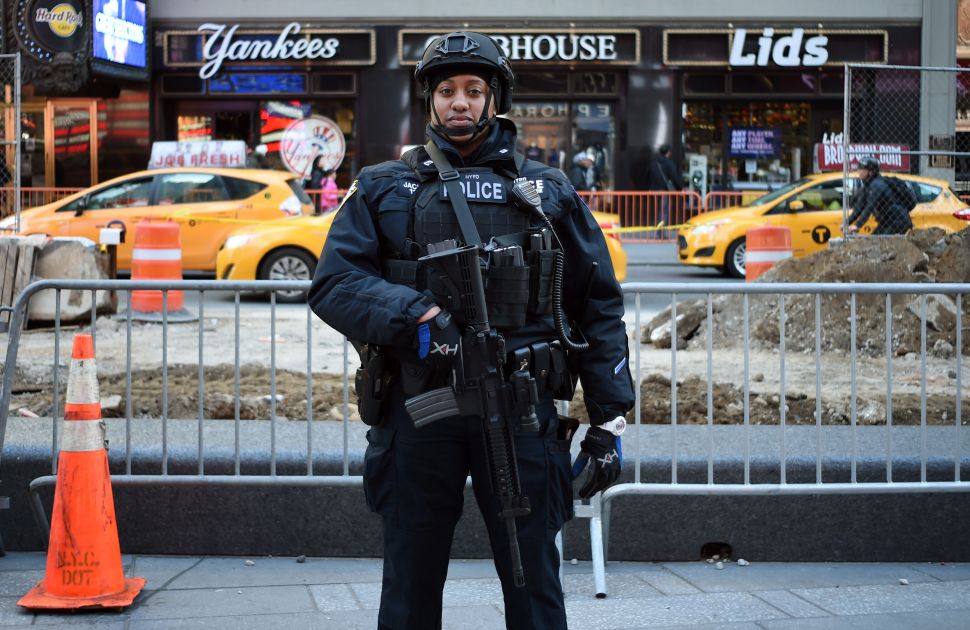