One of the more creative political ploys at the height of the 1960s occurred in 1969 when Gloria Steinem encouraged the quintessential New Yorker, novelist Norman Mailer, to run for mayor of New York City. Popular New York Daily News columnist Jimmy Breslin would be his running mate, and their campaign platform was that New York City would become the 51st state. Their slogan: “No more bullshit.”

Presidential historian Teddy White called it “One of the most serious campaigns run in the United States in the last five years… considered and thoughtful, the beginning of an attempt to apply ideas to a political situation.”

State and city secession movements are reported today in Texas, California, St. Louis—which wants independence from Missouri—and elsewhere. But they likely started in 2003, at the beginning of the war on Iraq, when a few Vermonters declared the Second Vermont Republic and claimed the right to oppose the greater government’s demands. With a little help from friends, these Vermonters proposed that people in their state and the state apparatus need not participate in the invasion and had the constitutional right not to participate. Their wish to send their own representative to the UN struck Harvard’s venerable John Kenneth Galbraith, still at his desk at 100 years of age, as “wonderfully to the good.”

Shortly thereafter, Arnold Schwarzenegger, the governor of California, declared in his second inaugural address that the state was “a good and global commonwealth,” and “we are the modern equivalent of the ancient city-states of Athens and Sparta.”

Governors and scholars perked up. Is New York City not a “good and global” commonwealth?

The great ambassador George Kennan thought so. He could well be the source of all the mischief as correspondence suggests he supported the Vermonters acts of state-based civil disobedience and self determination during the George W. Bush presidency. In his last book, Around the Cragged Hill, Mr. Kennan proposed the devolution of federal power to 12 matured regions, which included Los Angeles and New York City as autonomous “nation states,” similar to that which Mr. Mailer had proposed in 1969.

To the nine regions and the three self governing cities, New York, Chicago and Los Angeles, Mr. Kennan wrote, “I would accord a larger part of the present federal powers than one might suspect – large enough, in fact, to make most people gasp.”

There have recently been proposals for New York secession from Albany, but in the western parts of the state—which want to join up with more active economies in nearby Pennsylvania.

This seems a simple economic expedient, but if you drive west across New York state at the top, then take the detour at Malone through Amish country, you come out an hour later at Potsdam and Canton. It feels quite different than hipster Brooklyn or the Upper East Side. It feels like the Midwest, and culturally you could say it has more in common with western Pennsylvania, Ohio and Michigan than it does with Manhattan.

Shared governance with these pastoral regions, delightful as they are, is so different in values from New York City, that combining the two would naturally cause only conflict and unnecessary contention which would seem unfair to both. Recently, both Andrew Weiner, former representative from New York, and New York Mayor Bill de Blasio have made the case that it does.

“The mayor and the governor don’t get along,” Mr. Weiner wrote in The New York Times last August. “The mayor of New York City chafes at so much of his agenda being subject to the approval of Albany. The governor of New York State resents being overshadowed by the mayor of the most important city in the world.”

From Politico’s New York Playbook: ‘There are still so many things that we need to go to Albany for approval on that, at this point in history, we shouldn’t,’ de Blasio said on Bill Samuels’ radio show. ‘It’s a semi-colonial dynamic that really needs to be overcome at this point. … [The city] can’t constantly be hindered by an often arbitrary approval process in Albany [and that] there has to be a rethinking of that relationship because we’re trying to get things done for people.’

Mr. Mailer could not have said it better.

And although it may be the most powerful city in the world, New York City today lacks the most basic tools of self governance and the most obvious defenses against federal government when it takes a malevolent turn: Two senators and the Tenth Amendment, which gives states the right to turn back legislation forced upon them by Washington without constitutional basis.

“We have the third-largest governmental budget of any locality in America, after the state of California and the state of New York. [Sounding much like Schwarzenegger] It makes no sense that there are so many areas where we need Albany approval,” Mr. de Blasio said recently according to a report in the Observer. “This city deserves more self-determination.”

Like Mr. Mailer, like Mr. Kennan, like Mr. Schwarzenegger, Mr. de Blasio could well be seen as ahead of his time on this. And given the status of a New York City mayor, he could lead America and even Europe in rethinking the ancient relationships of regions in a modern age to a more just, realistic and equitable future—if he was not tethered to Albany.

Mr. Weiner suggests changes through New York’s periodic constitutional convention admitting that it “could be a messy business. But it may be the only way to bring order to the broken relationship between the mayor and the governor.”

It is not the only way, but it is a start. And depending on the results, should determine what to do next. 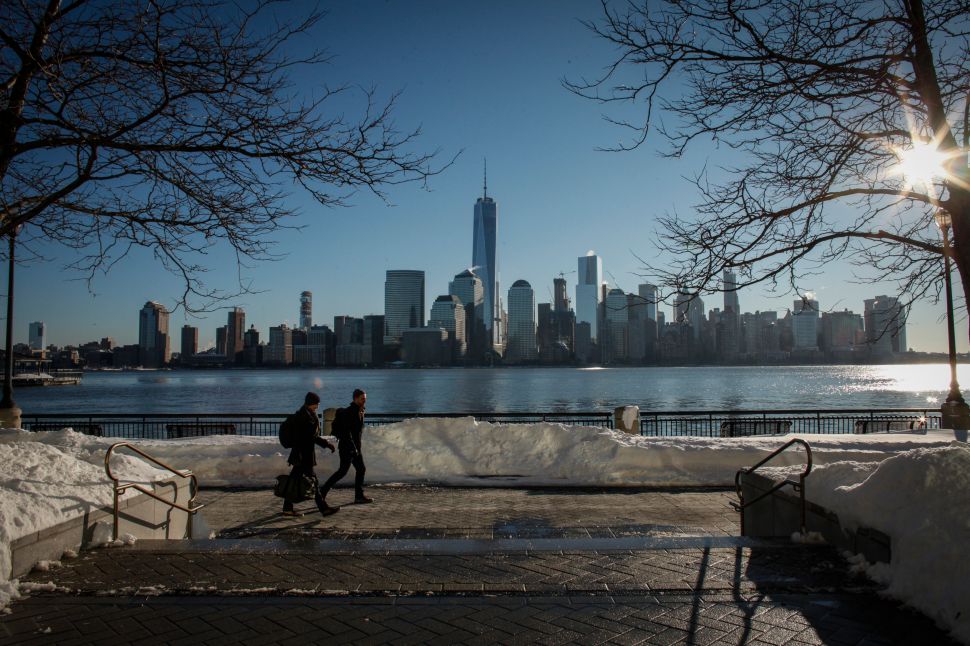