Writer-director Richard Linklater spent years on his previous film Boyhood. His latest, a comedy called Everybody Wants Some!!, looks like it was made in just a few days. It just seems like years to get through it.

Despite the title, which relates to a song by Van Halen, it is never clear what everybody wants some of, but the film does feature a cast of obviously talented, charismatic unknowns (an inconvenience that I predict will soon be rectified) playing members of a dorky college baseball team in Mr. Linklater’s home state of Texas in the 1980s, three days before the school term commences. The movie is self-described by the filmmaker as “a spiritual sequel” to his 1993 high school hit Dazed and Confused, whatever that means. In other words, it’s Animal House meets Grease. You can have it. My problem is not that it’s a bad movie. I live with bad movies on such a daily basis that I have learned to expect little more. My trouble is that the way Mr. Linklater depicts college life in the 1980s, which is supposed to be so retro it makes you laugh, is already such ancient history that it seems like education on the planet Pluto.

By 1980, I had already appeared in three movies, worked as a professional journalist in four New York newspapers and published nine books. Kids obsessed with pinball, pool and pizza while smoking joints, guzzling beer and playing baseball? Who knew? The bare-chested jocks in Everybody Wants Some!!, who jump into a lake from a rope, do yoga on the baseball diamond and fill a bed with a garden hose until the upstairs floor of their rented house collapses, just cannot find the trigger to my funny bone.

For laughs, there’s a sorority party where somebody opens an icebox door for another cold one and a cat jumps out. It’s too early for the disgustingly tiresome reality of political relevance, but one teammate has the entire collection of The Twilight Zone and knows the title and plot of each episode like a badge of honor. Several girls are on hand in the local Texas bars to get mauled, but they don’t last long enough to raise awareness for an oncoming cause called Women’s Lib. Hormones rage, insufficient family allowances battle empty wallets to buy expensive condoms and the testosterone wins.

Anyone over 30 is already too old to identify with anything that happens in this movie. No stars, no plot and no sign of a textbook in sight, but the 12 able-bodied Alpha males who stand out on the team and in the movie include wholesome pitcher Blake Jenner (from TV’s Glee), cornball Texas hillbilly thrower Will Brittain, ladies’ man Tyler Hoechlin, bearded pothead Wyatt Russell (the son of Goldie Hawn and Kurt Russell) and egomaniacal Matthew McConaughey lookalike, Glen Powell. For real silliness, the acting students in the drama club throw a costume party where the athletes steal and seduce their girlfriends, who are dressed like characters from Alice in Wonderland. I admire Richard Linklater, but anyone who fixates on memories like these suffers from a case of arrested development. It all looks like old reruns of dated TV sitcoms, like Welcome Back, Kotter.

Four minutes before the end credits, everyone awakens hung over in myriad beds that are not their own and heads for the final scene, which is the first day of class, on which they promptly fall asleep before the first bell sounds. I beat them to the punch by at least an hour. 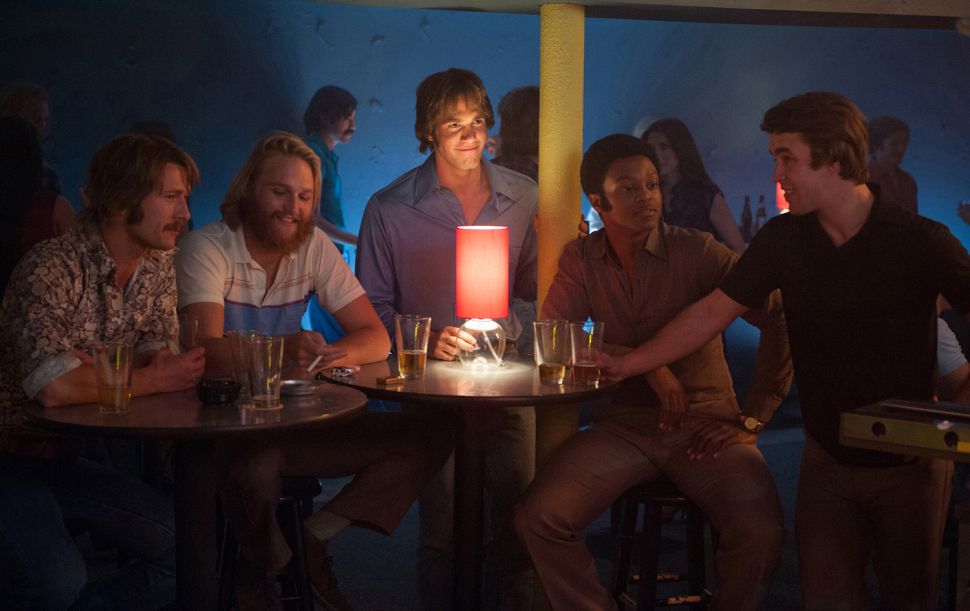