In a rare win for Mayor Bill de Blasio, the City Council voted on March 17 in favor of his sweeping plans to rezone New York to create more affordable housing. But the mayor may have gained a hill only to find a mountain towering in front of him: for his new initiative to work, he must coax developers to build—and to do that, he must shepherd a renovated version of the 421a tax exemption for developers through the State Legislature. And unlike the relatively hospitable Council, Albany is home to largely unsympathetic interests: a Republican State Senate, an Assembly full of Democrats aligned with building trades unions and, of course, the mayor’s regular tormentor, Gov. Andrew Cuomo.

The previous abatement, which offered relief from increased tax assessments on new construction, lapsed in January after the Real Estate Board of New York failed to reach an agreement with the Building and Construction Trades Council of Greater New York on including new wage floors for construction workers into the code. And the mayor must either figure out how to end that impasse—or find another way to construct the 80,000 new below-market apartments called for in his ambitious plan.

The centerpiece of the de Blasio administration’s affordability strategy is Mandatory Inclusionary Housing, or MIH, which obligates developers to set aside 25 to 30 percent of new units for middle- and lower-middle-class tenants. (The city uses a kitchen-sink toolkit of other subsidies to create housing for its poorest residents.) MIH, one of two proposals that just cleared the Council, was designed to harness the market for upscale apartments, and force developers to also create homes for residents with more modest incomes. But given the high costs of land and construction, without 421a, there’s little incentive for the real estate industry to build new projects.

“When you look at a budget for a building, if all of a sudden your taxes are running at 30 percent of your operating expenses, there’s not a lot of room for profit,” real estate attorney Steve Hochberg explained. “The concept of what the mayor planned was meant to go hand in hand with a 421a.”

“Without any resolution to the 421a issue, it seems impossible that the mayor will be able to achieve his goals,” one union head, who requested anonymity, said.

REBNY President John Banks called MIH “a valuable tool,” but acknowledged that its success hinges on a new incarnation of 421a. The absence of such an incentive “limits its effectiveness,” the head of the influential organization of building interests said in a statement. He added that the exemption is especially important to the mayor’s plans to redevelop impoverished neighborhoods like East New York in Brooklyn and the South Bronx.

The mayor’s office insists that it has programs that can substitute for 421a: namely, the 420c and Article 11 abatements. However, both those credits are designed for developers either working with a nonprofit partner or through a Housing Development Fund Company (a corporation created to build homes for the low-income)—that is, those in the business of building cheap housing. Such programs don’t dovetail with MIH, which compels companies looking to construct market-rate apartments to make room for the masses. And, ultimately, Mr. de Blasio’s team admitted the loss of 421a hobbles their agenda.

“Until we have a smart, effective tax abatement program that incentivizes affordable housing across market types, we’ll see luxury condos being built in the hottest neighborhoods instead of the rental housing we so badly need,” spokesman Austin Finan said.

The biggest hurdle for Mr. de Blasio is that the governor, Assembly Speaker Carl Heastie and State Senate leader John Flanagan—the men who ultimately decide if and how to revive 421a—are all close to the Building and Construction Trades Council of Greater New York. Mr. Cuomo has indicated that he will not support a new 421a program that does not incorporate prevailing wages. Mr. de Blasio’s team has argued such standards would dramatically increase construction costs, thwarting 17,000 affordable apartments.

There are a few possible compromises to consider. A new 421a could make luxury condominium developments eligible for the tax breaks (something both the mayor and the governor, in a rare agreement, both oppose), but only if they hire union labor. Alternately, the credit could require projects in the heart of Manhattan and along the burgeoning waterfronts of Brooklyn and Queens to pay prevailing wages, but not developments on less-fertile real estate. (Assembly Housing Committee Chair Keith Wright has proposed creating new subsidies for low-income housing, but sources the Observer spoke with agreed this is not a true replacement for 421a and the middle-income tenants targeted under MIH).

But the one man who could likely broker a deal is also the least likely to ride to the mayor’s rescue: Mr. Cuomo. 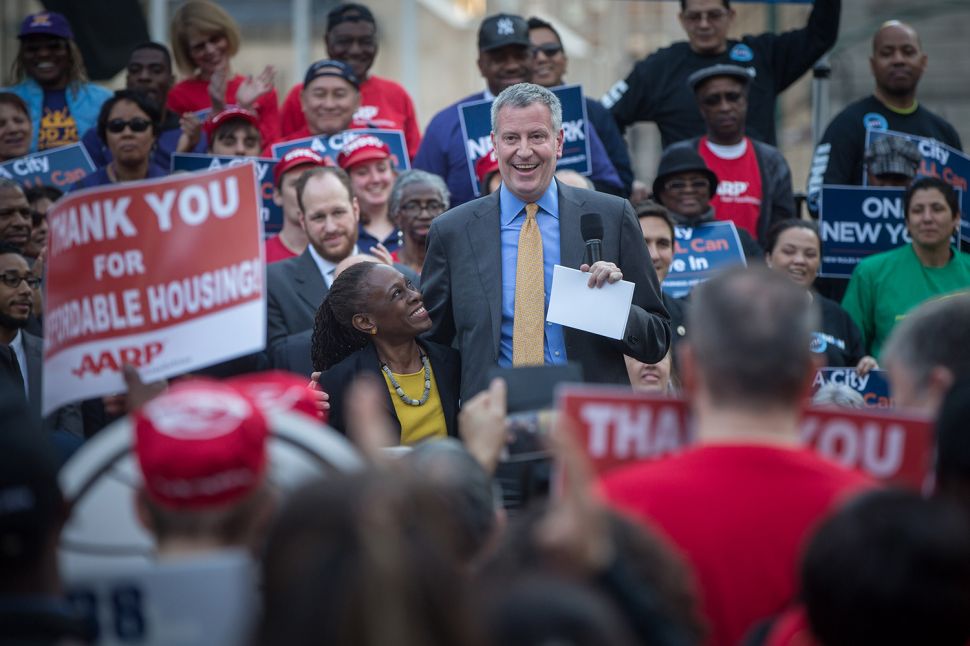