“It’s clear pattern of division and using race as a wedge, and using it as a strategic —that’s racism,” Mr. de Blasio said this morning on CNN’s New Day. “And by the way, this the worst kind of racism. It’s cynical racism for his own political gain.”

Mr. de Blasio’s comments came two days after he took to Twitter to say that “of course” Mr. Trump, a fellow New Yorker and real estate magnate, “is a racist.”

The mayor, who is supporting Democrat Hillary Clinton for president, pointed to Mr. Trump’s broad rhetoric about Mexicans (“rapists” coming over the border, he said in his campaign announcement) and Muslims (whom he has said should be barred from entering the country “until we can figure out what’s going on”), and said “demographics” clearly seemed to come into account in skirmishes between Mr. Trump’s supporters and protesters at his rallies.

Echoing a point many—including some of his fellow Republicans—have made in the days since a Chicago rally was canceled due to tensions between supporters and demonstrators, Mr. de Blasio said Mr. Trump is encouraging violence against people “who have different views or look different.” Mr. de Blasio said he supported the protesters, who Mr. Trump has dismissed as “professional” supporters of other candidates.

“Trying to disrupt someone who is trying to divide America, I have no problem with whatsoever—peacefully. peacefully. Go to someone’s rally and hold a counter-rally,” Mr. de Blasio said. “Then to see him say, ‘Let’s beat them up and of course I’ll pay the legal bills for someone who does beat them up.’ I mean, this is not normal. Let’s be clear about that.”

On Meet the Press yesterday, Mr. Trump said he would look into paying the legal bills of a 78-year-old man caught on video punching a young black protester in the face at a Trump rally. (Mr. Trump had previously advised his supporters that, if they saw a protester “getting ready to throw a tomato, knock the crap out of ’em, would you?” going on to promise three times that he would “pay for the legal fees.”)

Mr. Trump has previously responded to criticism from Mr. de Blasio by saying he is “widely considered” the worst mayor in the country, but his camp eschewed attacking the mayor today when asked to respond to Mr. de Blasio’s comments.

“Mr. Trump has been very clear that he does not condone violence and while he appreciates the passion of his supporters, he wants to unify people,” spokeswoman Hope Hicks told the Observer.

Mr. de Blasio—who has made Mr. Trump a frequent target—said the billionaire had “masterfully” tapped into economic anxiety and layered it with a racial appeal. On Twitter this weekend he called Mr. Trump’s movement “proto-facism,” and once again today said democracy seemed to be under threat.

“This is when democracies start to break down a little bit,” Mr. de Blasio said. “When someone like this emerges and they’re not stopped and they’re not countered. So people have to stand up and say Donald Trump doesn’t represent our democracy.” 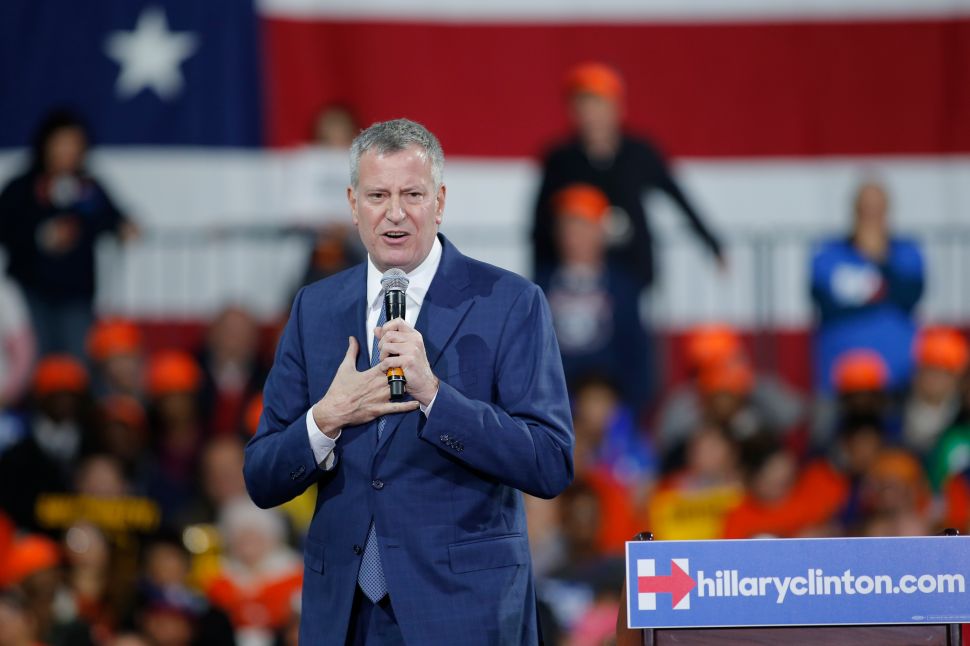