The slaughter in Brussels is another reminder that our violent Islamist terrorist enemies are fighting a sustained, generational campaign of global, imperialist conquest.

9-11. Fort Hood. San Bernardino. Chattanooga. It’s past time for the president to acknowledge his obvious and stupid mistake. America is a battlefield; the war is not just overseas. More importantly, if successful leadership is one of Mr. Obama’s presidential goals, there is nothing “contingent” about the war. The war is quite real. Our enemies wrath and goals are unconditional.

For the record, I never liked the name Global War on Terror, though it served. In fall 2001 I suggested Millennium or Millennial War.  I thought we were in a long haul war for the terms of modernity.

We are engaged in such a war, fighting enemies who believe the future lies in unconditionally restoring their imperialist past.

When the vast majority of Earth’s oppressed get a chance to vote with their feet, the destination isn’t Mosul or Moscow, it’s Manhattan or Miami.

For the moment, ISIL jihadists have assumed Al Qaeda’s mantle of global leadership in a global war to secure a global caliphate. From their rump caliphate in eastern Syria and northern Iraq, and its provinces in Yemen and Libya, ISIL’s caliph and his commanders direct political policies which include enslavement, mass rape, the mass murder of  minority ethnic groups like Yazidis and Berbers, mass murder of Arab Christians and non-Arab Middle Eastern Christians and mass murder of Shia Muslims. ISIL-affiliates take the slaughter beyond the Middle East and Europe. Boko Haram terrorists rape and enslave Nigerian Christian girls. They have also murdered thousands of Nigerians who oppose them, whether Christian, Muslim or animist.

Mass murder as policy is—well, it’s genocide. However, it took the reluctant, stalling, begrudging Obama Administration two bloody years to acknowledge that ISIL’s calculated killers are genocidaires. (Historical footnote: Mr. Obama and his UN ambassador, Samantha Power, were part of the political mob calling George W. Bush a moral failure for failing to stop the genocide in Sudan’s Darfur region.) For his part, President Obama constantly bewails the guilt of Western imperialists and Crusaders and American chattel slavery and exploitation and, of course, George W. Bush. Mr. Obama employs this guilt narrative as a domestic political tool and occasionally in foreign affairs.

Mr. Obama needs to get the hell over his self-serving guilt trip and get serious about stopping 21st century genocidal imperialism.

ISIL and Al Qaeda are both contemporary, unapologetic, genocidal imperialist powers. Islam’s successful 7th century imperialism, the expansion of Muslim power from Spain to Persia, is their model.  Al Qaeda recruited on its radical message and then its initial imperial “success” of 9/11. ISIL’s May-June 2014 offensive (the one that seized Mosul and took truck-borne ISIL fighters to the outskirts of Baghdad) was an imperialist offensive that also served as a recruiting tool. First Al Qaeda and now ISIL want the “green map” of Muslim authority and Sharia Law to cover the entirety of Planet Earth.

Violent Islamist theoreticians (for example, Sayid Qutb) blame the Muslim decay that began in the 13th century on evil external actors (Mongol, Iranian, Turkish, European) and the moral failure of Muslims to adhere to “the true faith” as practiced by Mohammad’s immediate followers (Salafis). OK, history went wrong—but ISIL’s violent Islamists will correct it, with bombs, mass murder and their interpretation of the truth faith.

So Mr. Obama damn well needs to read some honest, non-Leftist comparative history—then stop his guilt shtick. Examples of American excess and silliness abound, but examples of American success and largesse are even more abundant. This fact sticks in the throat of America’s enemies and the throats of a lot of left-wing U.S. professors: When the vast majority of Earth’s oppressed get a chance to vote with their feet, the destination isn’t Mosul or Moscow, it’s Manhattan or Miami.

Pray that Obama finally snaps to that fact, then gets serious about crushing ISIL’s caliphate. 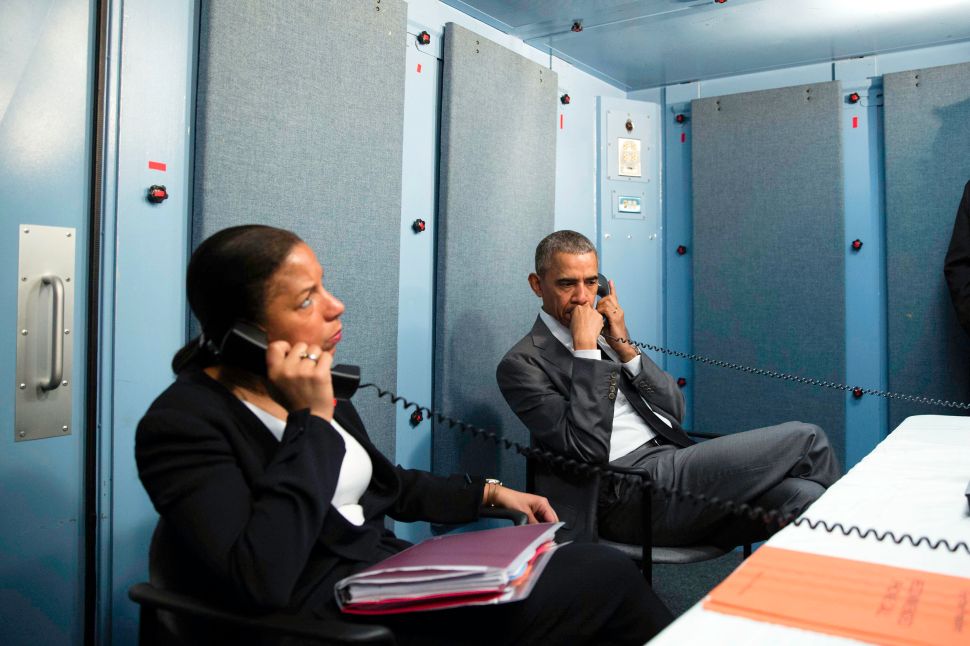