We suppose that once you’ve bought the second-priciest penthouse on Park Avenue, other abodes simply pale in comparison.

At least, that seems to be how French-born financier Raymond Svider feels. After picking up the penthouse at 737 Park Avenue for $32 million, it was time to let go of his other Park Avenue spread at the Mayfair.

Like his new penthouse at 737 Park, the six-bedroom, 6.5-bath abode at 610 Park Avenue is a prewar condo on Park—a relative rarity amongst the sea of exclusive co-ops that line the avenue’s streets.

The sprawling layout is the result of a two-unit combination created by Mr. Svider and his wife, Frederique Albin, after they purchased two adjacent apartments in the building.

“They paid $15 million for two apartments in 2008, and embarked on a complete gut renovation on top of that $15 million,” Modlin Group’s Adam Modlin, who is sharing the listing with Kyle Blackmon at Compass, informed the Observer.

Sadly for Mr. Svider, he’s had to lower his expectations a tad—after nearly a year of going on and off the market, the apartment is now listed for a comparatively paltry $15.75 million.

Unlike his new penthouse, however, which was delivered as a “white box” without any interior walls or finishes (it does, however, have a fireplace!), the apartment at the Mayfair is already decked out. Along with north, south, and west exposures, it has a formal dining room and a chef’s eat-in kitchen, and the master suite includes a walk-in closet, office, and a windowed bath with a separate spa shower.

Per the listing, the home has been “meticulously renovated,” and from the photos, it looks quite nice, though we can’t say that lime green is a color we would choose for chairs or accent pillows in this particular home. The idyllic lilac-accented bedroom complete with Philippe Starck chairs, on the other hand, is rather adorable.

When it comes to prospective buyers, the brokers would do well to canvas their oenophile, or at least hard-drinking acquaintances—the home has an 800-bottle wine closet. 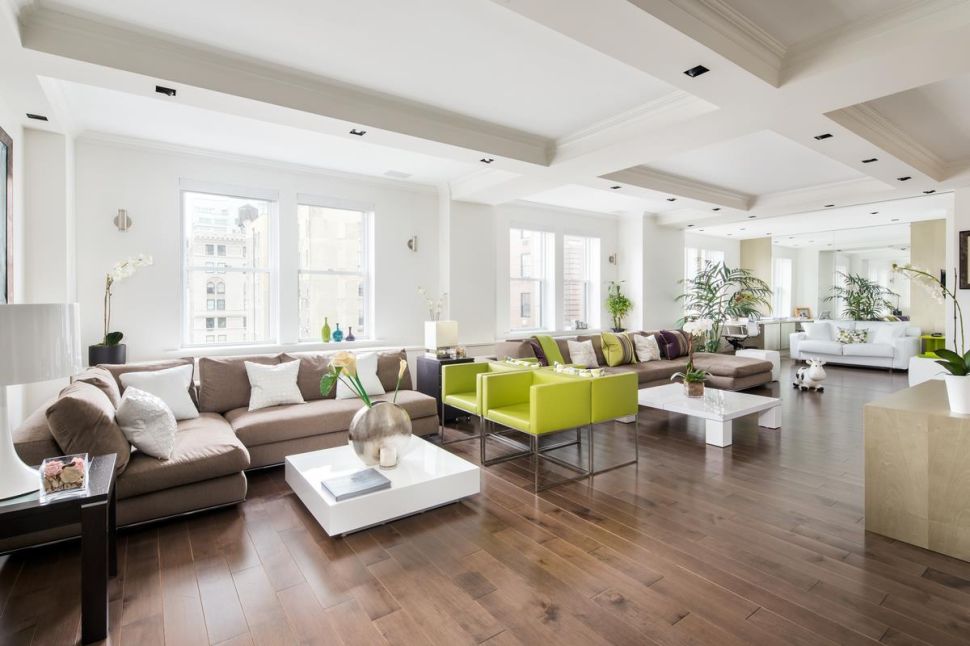