Last Thursday night, Luxembourg and Dayan’s Upper East Side townhouse buzzed with activity. Curators, collectors and writers flowed up and down the stairs of the three-story gallery to view “In the Making,” a new exhibition exploring the complex dynamics between artist and assistant. Compelling examples of mutual influence could be found on every floor. On the top level, Urs Fischer’s stray body parts dangled from the ceiling next to an equally surreal video piece by his former assistant Darren Bader. On the second Eric Brown’s painted collage echoed the appropriative voice of his boss Richard Prince. Tracing the matriculation of contemporary stars, like Messrs. Brown and Bader, the show juxtaposes the work of apprentice and master to gain new insight into the practice of both.

Before they opened the doors to the public, the evening’s host dealers, Daniella Luxembourg and Amalia Dayan, gathered guests on the first floor to introduce the show’s curator, Tamar Margalit, who pursued months of research to bring this once-in-a-lifetime exhibition to fruition.

Conversations between friends old and new drove the night. Artist George Condo took the floor from Ms. Margalit to tell a rousing anecdote from Andy Warhol’s factory—where the artist got a job first as a writer and then as a painter on the infamous assembly line. “There was a phone next to the silkscreen table. It would ring, and they would say, ‘It’s Mrs. Warhol. She wants the background to be green.’ I don’t know why they always referred to Andy that way, but they’d send me back to the closet to get cans of paint,” Mr. Condo said and laughed. A diamond duster at Warhol’s studio, Condo’s silkscreen hangs next to one he executed for the Pop Art legend. In recounting the predilections of his former boss, Mr. Condo recalled Warhol’s admiration for Robert Rauschenberg, whose work consumes the street level gallery alongside his Minimalist assistants, Dorothea Rockburne and Brice Marden.

Mr. Marden, who actually executed the Rauschenberg pieces, was not present, but Ms. Rockburne spoke highly of their times together. “I met Bob [Rauschenberg] at Black Mountain College, and we became good friends. For some reason he thought I was organized. One day I ran into him on the street, and he offered me a job,” said Ms. Rockburne, who promised Rauschenberg a six-month stint. “I hired Brice and saw that things got done. As everybody knows, I’m good at figures, so I balanced everything. The one thing about working for Bob is that his humor and intelligence were so superb.” Fond memories included an adaptation of Hamlet written by Rauschenberg and Cy Twombly with Ms. Rockburne cast as a long-haired Ophelia.

The exhibition presents Ms. Rockburne as a teacher as well as an assistant. Carroll Dunham, her assistant in the 1970s, credits the inspiration for his first mature body of work to Ms. Rockburne’s own experimentations with industrial materials, such as crude oil, chipboard and nails. The two are installed side by side on the first floor. “I’m still friends with Tip and Brice. I knew Bob until he died. These things just go on,” Ms. Rockburne said. “That is what I think is so important about this exhibition—everything is so much about market now, and nobody goes into what makes the work, how it comes about, what the human aspect of it is.” 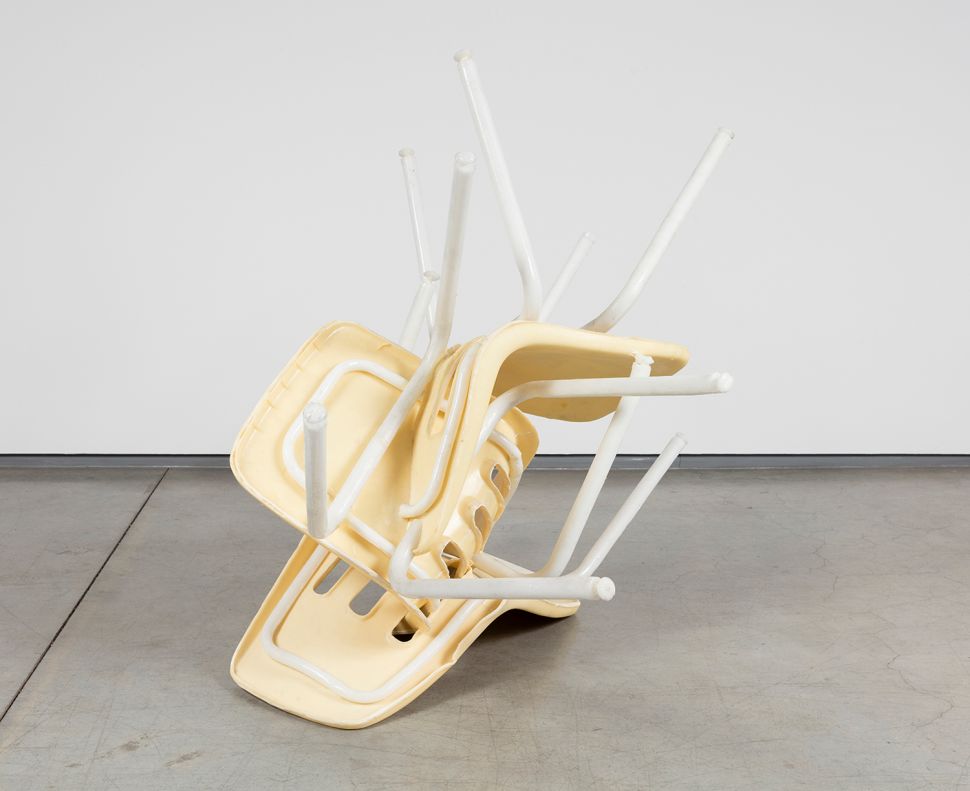