Nations and dynasties tend to cloak themselves in the same animal symbols—the eagle, lion or, covering both bases, gryphon. But our two main political parties acquired their mascots by a more honest route—insult and appropriation.

Today’s Democratic symbol first appeared during the toxic presidential election of 1828, when a print depicted the populist Democratic Andrew Jackson as a rowdy jackass trampling a clutch of chicks while a fox—Jackson’s running mate, Martin Van Buren—stalked the hen. Jackson embraced the caricature, invoking the scrappy jackass on the stump.

Though less common than asses, elephants had assumed iconic status in two revered institutions: war and the circus. During the Civil War, “seeing the elephant” became a universal euphemism for seeing combat and, more broadly, losing one’s innocence. Elephants themselves became the stars and literal standard bearers of the tent shows traveling America.

Both associations underlay the image a pro-Lincoln circular used to tout his 1864 reelection. An elephant bearing a pennant reading “The Elephant Is Coming” and a blanket inscribed, more cryptically, “Penn[sylvani]a 20,000”—Lincoln’s victory margin in that swing state. What better foil to the president’s bantam challenger, “Little George” McClellan, than a genuine jumbo?

But it took cartoonist Thomas Nast to pin the donkey and elephant securely on the parties of Jackson and Lincoln. In 1879, in one of many renderings, he drew a sleeping elephant blocking the road to the White House, while a headstrong jackass plunged into the pit of “Financial Chaos.”

Cartoonists no longer label their Democratic jackasses and Republican elephants; the identifications are indelible, though their meanings have shifted. Nast’s jackasses were brash and bullying; their successors are often puny and abashed. His elephants were panicky or sleepy, a warning to his own party; their successors are greedy and overbearing—like fat cats, only much fatter.

The Republican Party has formally adopted the elephant, while the donkey remains merely an unofficial Demo symbol. Still, the elephant presents a bigger target. Adlai Stevenson, the Democratic standard bearer in the 1950s, quipped that it made the perfect Republican mascot: It “has a thick skin, a head full of ivory, and as everyone who has seen a circus parade knows, proceeds best by grasping the tail of its predecessor.”

Given their legacies, both parties might gladly shed their symbols. Here are some suggestions:

Democrats are bonobos, in both the way they fancy themselves and the way they really are. For years, these “love monkeys” counterbalanced chest-beating, war-waging chimpanzees. Bonobos, in the popular view, are exuberantly hypersexual and polysexual, using sex to resolve power issues rather than violence to resolve sexual issues—why fight when you could be penis-fencing or rubbing labia?

“If chimpanzees are from Mars, bonobos are from Venus,” said primatologist Frans de Waal, whose research established their harmonious hippy reputation. He and other bonobo fans embrace them as a more hopeful model of human nature than killer chimps—just the way Democrats see themselves, especially against this year’s Republican presidential pack.

A lot of bonobo males walk around short-fingered, like old-time shingle-mill workers. Bonobos may be less violent than chimps, but they’re hardly pacifists. They rip apart prey with the same gusto, and they’re just as political—except female bonobos out-politic the males. Where chimpanzee males band together against other clans, female bonobos gang up, sometimes brutally, on males who get out of line. Hillary Clinton, Nancy Pelosi and Debbie Wasserman Schultz might learn from them.

But what animal should represent the Republicans? The ostrich is the original “walking tall” vigilante—taller than any other critter except giraffes and elephants. From 10 feet high, its powerful eyes scan the horizon for threats; each eyeball is bigger than its brain because the ostrich knows that too much thinking interferes with vigilance.

This may explain why ostriches, though fleet, are not adept at fleeing predators: They tend to run in circles. Nevertheless, with a tripwire temper and a kick that can stave in a skull, the ostrich will know how to deal with Iran’s mullahs and Kim Jong-un.

Like the party faithful, ostriches can digest just about anything, no matter how improbable. Their intestines are nearly twice as long as humans.’

Alas, their most celebrated attribute, burying their heads in the sand, is a myth; they merely droop their long necks when they sleep. But it expresses too well GOP orthodoxy on evolution and climate change to be lightly discarded. So keep your head down, big fella, and welcome to the fold.

Eric Scigliano is the author of Michelangelo’s Mountain and Love, War, and Circuses: The Age-Old Relationship Between Elephants and Humans. 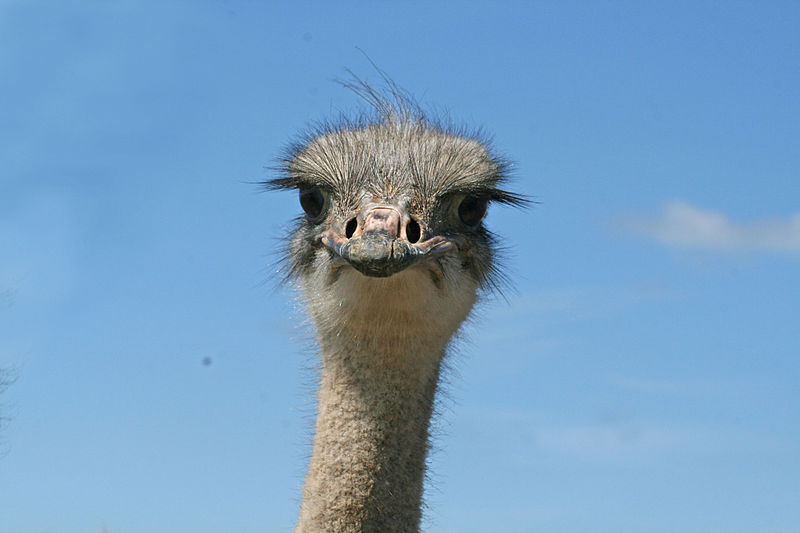