It’s the end of another week in New Jersey – and possibly the end of hopes for casinos in North Jersey if Gov. Chris Christie doesn’t get his way in Atlantic City.

Christie Says He’ll Oppose North Jersey Gaming if AC Takeover and PILOT Go Down
Pivoting from an a.m. fusillade of criticism over his efforts to block and tackle for billionaire real estate tycoon Donald Trump, Gov. Chris Christie this afternoon unleashed a new round of ire – complete with charts and graphs – against the local leaders of Atlantic City and Speaker Vincent Prieto (D-32) in a hastily called press conference.
Max Pizarro, PolitickerNJ Read more

Despite Backroom Negotiation Attempts, Bloomfield Primary Fight Cont.
As late as Thursday, Essex County Democratic officials were attempting to negotiate with the two Democratic factions in Bloomfield in order to avoid a June 7 primary that is shaping up to be a bloody civil war, according to sources.
Alyana Alfaro, PolitickerNJ Read more

Doherty V. Wisniewski on the Lewandowski Case
Two lawyer-politicians on opposite sides of the political aisle broke apart the Corey Lewandowski battery charge for PolitickerNJ. Lewandowski is the campaign manager for Trump caught on video tugging on the arm of a Brietbart reporter.
Max Pizarro, PolitickerNJ Read more

Mum on Trump, MacArthur Calls for Tougher Foreign Policy at Kickoff
U.S. Representative Tom MacArthur kicked off his reelection campaign Thursday in New Jersey’s third congressional district, where he said he has still not decided on an endorsement in a presidential that has many Republican incumbents concerned for their seats as Trump gets nearer and nearer to the nomination.
JT Aregood, PolitickerNJ Read more

Guardian Questions Christie’s Numbers on A.C. Spending
Atlantic City Mayor Don Guardian fired back against Governor Chris Christie following Christie’s Thursday press conference where he threatened to withdraw his support for North Jersey casinos if the state takeover effort does not pass. Guardian has allied himself with Assembly Speaker Vince Prieto (D-32), who objects to the takeover ebcause it would allow the state Local Finance Board to alter or break collective bargaining agreements with city workers.
JT Aregood, PolitickerNJ Read more

Fulop: JC will be Fine ‘With or Without a Casino’
Jersey City Mayor Steven Fulop shot back at Gov. Chris Christie this evening in a statement following the governor’s press conference and repeated accusations that Fulop, acting in the role of a politically ambitious boss, has Speaker Vincent Prieto (D-32) on a short leash.
Max Pizarro, PolitickerNJ Read more

In CD11, Democratic Candidate Stresses Need for Party Unity
Joe Wenzel hasn’t held elected office since he lost reelection to the Clifton Board of Education in 2001. Now, he has decided to attempt to make a return to elected office by challenging Congressman Rodney Frelinghuysen (R-11) for the seat he has held for over 20 years.
Alyana Alfaro, PolitickerNJ Read more

New Jersey Politician Quotes Shakespeare
The digital age has ushered in the burial of a great many things including, arguably, literacy, but for former U.S. Senator Bob Torricelli tonight the occasion of the Somerset County Democratic Convention provided a platform to indulge that most elusive of modern social graces: the well-placed allusion to Shakespeare.
Max Pizarro, PolitickerNJ Read more

Governor Would Rather Attack Than Work on Atlantic City
If Governor Christie would devote even a third of the time he is spending these days behind a microphone, at a game, on television or, apparently, drawing up charts towards actually working on behalf of a solution for the workforce in Atlantic City we would already have a resolution.
Pat Colligan, PolitickerNJ Read more

It’s official: RWJBarnabas Health gets final approval
It’s official. The merger to create the largest health system in New Jersey — valued at $5 billion — and the second-largest employer in the Garden State has been approved by the state.
By Anjalee Khemlani and Tom Bergeron, NJBiz Read more

Christie’s ‘not debatable’ data up for debate
In his push to cut taxes, Gov. Chris Christie argues that New Jersey lost two million residents and $18 billion in income because of its fiscal policies.
Ben Finley, Associated Press Read more

NJPP forum questions wisdom of proposed estate tax repeal
Speaking Thursday morning at a New Jersey Policy Perspective forum on the issue of “tax flight,” Assembly Budget Chair Gary Schaer railed against the notion of giving up the revenues generated by New Jersey’s estate and inheritance taxes at a time when “the state is facing crisis in so many areas.”
Andrew George, NJBiz Read more

As Goes Christie, So Goes the 2017 Republican Governor’s Race in NJ
With three probables and two maybes warily circling one another while eyeing the 2017 Democratic gubernatorial nomination, Republicans have largely been left out of the speculation about who will be selected to succeed Gov. Chris Christie.
Carl Golden, NJSpotlight Read more

Christie M&M’s-gate: Why is there a bag inside the box? Mars explains
To the governor, it was a simple snack. To the internet, oh-so-much more.
When Gov. Chris Christie dug into a box of M&M’s at a college basketball game on March 25, he opened the bag inside and proceeded to pour the candies into the box.
Amy Kuperinsky, NJ.com Read more

N.J. pension debt grew to $43.8B last year
New Jersey’s public pension shortfall, already one of the worst in the country, got even bigger in 2015, according to new actuarial reports.
Samantha Marcus, NJ.com Read more 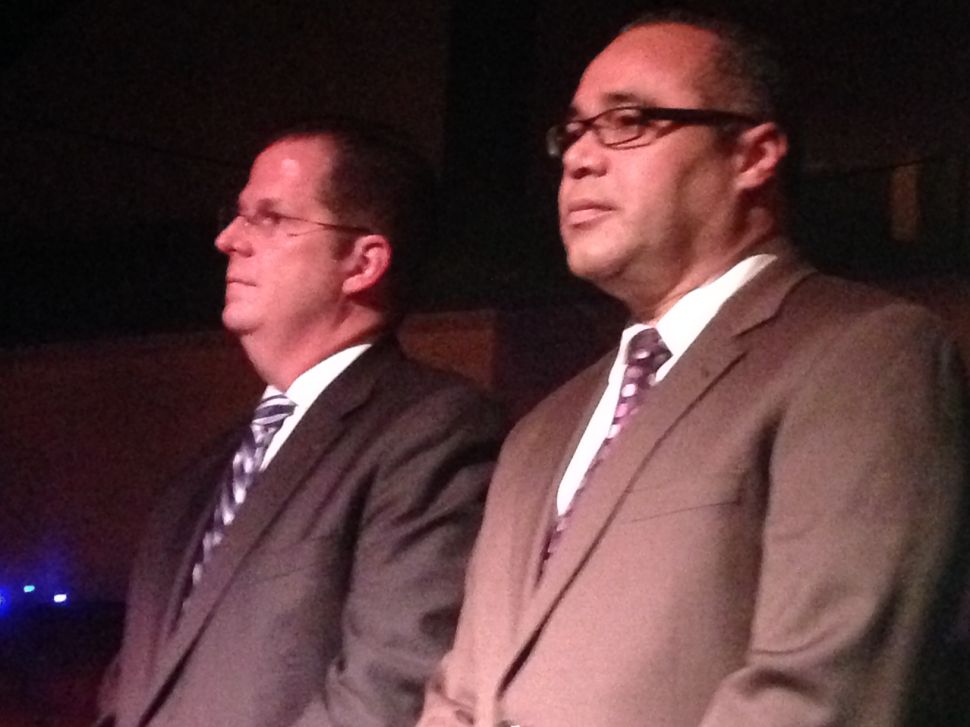