It’s Tuesday morning, and we take a look at two possible GOP gubernatorial contenders and how how Sen. Steve Sweeney, a Democratic contender for the post, is addressing concerns about lead in drinking water

Quote of the Day: “I am a great defender of the pharmaceutical community… but they need to understand they are part of the problem we are trying to correct.” – Congressman Bill Pascrell, on dealing with the state’s opiate addiction problem.

Examining the Joe D. 2017 Trial Balloon
Conversations about Joe DiVincenzo as a potential candidate for governor in 2017 are circulating in and around Essex County with greater frequency, according to Democratic Party sources; interpreted as either the aging egotistical murmurings of a guy who stuck his chin too far over the line for Chris Christie, or a legitimate game-changer – a Democratic Party establishment-worthy chariot in the circus maximus that would throw the guv’s contest into junkie-loving chaos.
Max Pizarro, PolitickerNJ Read more

Legislators Hope to Tackle Growing Opioid Addiction in NJ
U.S. Senators Bob Menenedez and Cory Booker and Congressman Bill Pascrell hosted a summit at Paterson’s St. Joseph’s Hospital to address New Jersey’s and the nation’s growing issue with opiate addiction. The officials say that the growing issue is due, in part, to over-prescription of such drugs by medical professionals. According to the elected officials, because opioids often lead to heroin addiction, alternative steps need to be taken in order to “curb the scourge” that drugs have had on communities nationwide.
Alyana Alfaro, PolitickerNJ Read more

Sweeney, Ruiz, Rice Call for State to Fund Lead Testing
Following this month’s revelations of elevated lead levels in Newark public schools’ , Governor Chris Christie’s budget is coming under fire as Senate Democrats move to offer schools $3 million in reimbursement for performing bi-annual tests for lead. The results of those tests would need to be made public and an additional $20 million would be appropriated from the Clean Energy Fund for filters at schools affected by lead pipes.
JT Aregood, PolitickerNJ Read more

Against Trickle of Assembly Opposition, Sweeney Defends A.C. Takeover
With the state takeover of Atlantic City’s finances going to a vote in the Assembly, Senate sponsor Steve Sweeney (D-3) chose not to strike back against his Assembly counterpart Vince Prieto (D-32) Monday. Prieto has been a voluble critic of the legislation for the broad powers it would give the state to renegotiate or terminate collective bargaining agreements, and several Assembly members have come out in support of the speaker against the takeover.
JT Aregood, PolitickerNJ Read more

Caputo Says Christie’s Refusal to Negotiate with Prieto an ‘Insult’ to Legislature
In the middle of an ongoing statewide scrap between Gov. Chris Christie and Speaker Vincent Prieto (D-32), Assemblyman Ralph Caputo (D-28) on Monday called on Christie to work with the Assembly to forge a compromise that would protect Atlantic City and the rights of public workers.
Max Pizarro, PolitickerNJ Read more

The Camden Return of Angel Fuentes
Dumped out of his Assembly seat as part of the rearranging of the 5th District, former state Assemblyman Angel Fuentes is back – or wants to be, at least, desire that takes on a special priority as a function of the local party machine.
Max Pizarro, PolitickerNJ Read more

Mail Blasting Mayor Venezia Circulates in Bloomfield
A group called “Wake Up Bloomfield” has circulated mail pieces to Bloomfield’s Democratic residents that target Mayor Michael Venezia and encourage voters to “say no to corruption” on the June 7 primary when the mayor is challenged by Councilman Joseph Lopez for his office.
Alyana Alfaro, PolitickerNJ Read more

Kim Guadagno ’s 2017 Options and Prospects
In any election year other than 2017, New Jersey’s Lieutenant Governor Kim Guadagno would be considered one of the leading stars in the national GOP firmament. Indeed, she has a “star” quality about her that is reminiscent of my former boss in whose administration I served quite proudly, Christie Whitman.
Alan Steinberg, PolitickerNJ Read more

Taking the Bat to NJ’s Medical Marijuana Program
Last week, The Department of Health issued its annual report on the state of NJ’s medical marijuana program. I would’ve written about it sooner, but the report’s so rife with spin and political bull(redacted) that I needed to wait for new waders to arrive before I could delve in properly. Smartly sprinkled with graphs and tables, the report cherry-picks data in an attempt to cast a rosy glow on things. No surprise there. But digging a bit deeper reveals some data points that prove NJ’s medical marijuana program is still the pits. So let’s cherry pick a few numbers of our own, shall we?
Jay Lassiter, PolitickerNJ Read more

Gov. Christie’s shifting of $20M in open space funds called unconstitutional
Governor Christie’s decision to take nearly $20 million in state tax revenue dedicated to open space preservation and use it instead to cover parks management in his state budget was unconstitutional, according to a legal opinion issued by a non-partisan arm of the legislature.
James O’Neill, The Record Read more

Which N.J. lawmaker will speak at a D.C. college graduation
U.S. Sen. Cory Booker was announced Monday as the graduation speaker for the George Washington University in the nation’s capital.
Jonathan D. Salant, NJ.com Read more 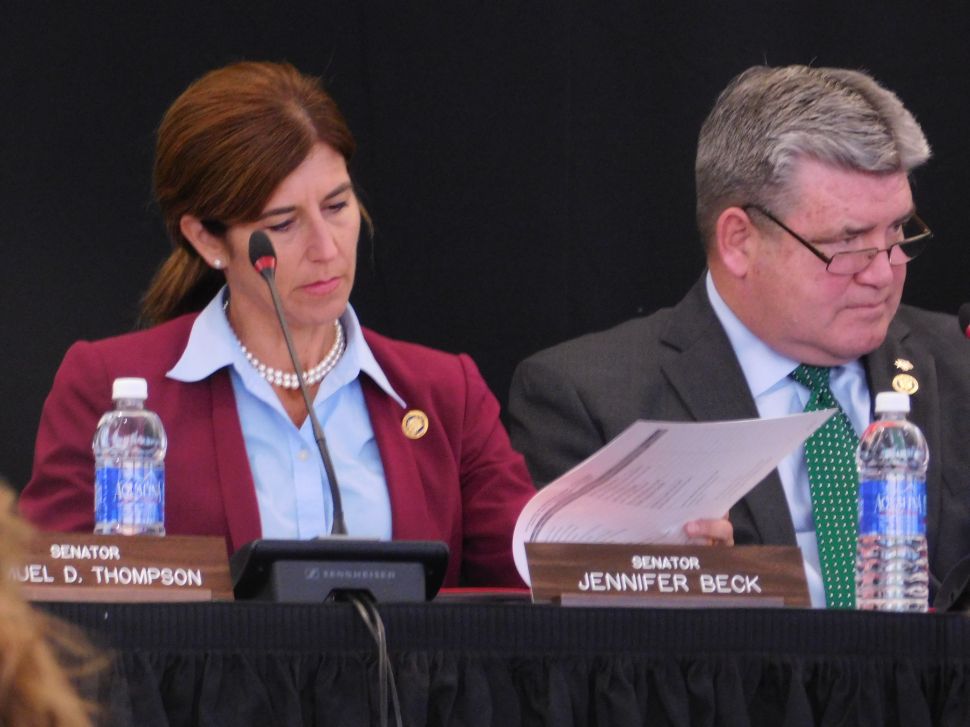